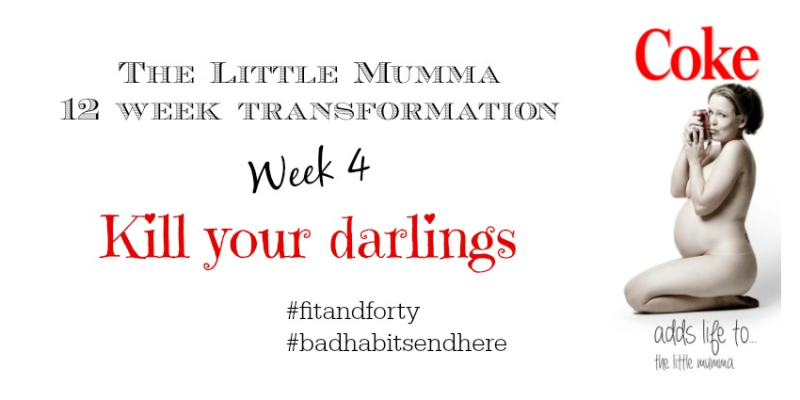 So if you read my blog post for Week 3, you would know that I finally made the leap and quit Coke. Again. If you’ve been reading the blog for a while, you’ll probably know I’ve quit Coke before. If you’re new to the blog, you might be thinking, “What the hell? Why do you need to keep giving up Coke? What do you think Coke is, heroin?” And I would tell you that yes, for me, Coke is heroin. It’s the thing I never expected to become addicted to and the thing I find hardest to say no to.

When I track my mind back, it’s hard to pinpoint a time when Coke became so problematic for me. I was never allowed to drink it as a kid but at some point in my teens, the love affair began. In my early 20’s, I would say most people who knew me would remember that I loved the red can. But it wasn’t until I was home with baby that it got out of control. Specifically, baby number two and the crushing fatigue that ensued were what turned Coke from something I liked into something I needed. The health implications snowballed from there. If you want to read more about that, I’ve discussed my battle with the Black Doctor here and here.

So I am back on the wagon. Today is Wednesday which means I have been Coke-free for 6 days. Tuesday was rough. There will be rougher days ahead. But I have identified Coke as the singular most problematic issue in getting my health back on track.

We humans are quick to argue in defence of our bad habits. We cling stubbornly to the very things that are destroying us, explaining it away with empty statements like “You’ve gotta die of something!” and “Everyone needs one vice!” We would rather make flimsy excuses than make a change – even if it could positively alter our life to do so. But if we’re lucky, there is a little voice inside us who suddenly pipes up and calls bullshit on our status quo. If we’re smart, we will listen. If we’re serious, we will take action.

So I’m lucky, smart AND serious. I know I can do it because I’ve done it before. What I need to investigate more is how I can be so committed and on track only to fall off the wagon later down the track. I will need to be vigilant for what triggers these relapses. But for now, I am sticking with a 12 step philosophy which tells me that down the track is not my focus. I only have to give up Coke for today. The infinite future is daunting but today is doable. Today I’ve got this. One day at a time, friends.

Here’s what my trainer, Nikki, from Cinch had to say.

Aim to just make little changes to start with. Identify one thing you want/need to change and go from there.

Be kind to yourself! Sure as eggs are a great high protein snack, you WILL Slip up. Forgive yourself and simply get back on track. Watch your internal dialogue – no berating, no giving up. Be accepting that you had one slip, forget it and move on.

You can watch Nik and I talk more about my Coke habit and how I’m combating it here.

Some people come at their health kick with an all-in ferocity – and some even stick to it! But if you, like me, tend to find that approach so punishing that you end up giving up, take heart. This is not a fad. This is forever. So it’s okay to start slow. You don’t need to give up everything you enjoy. But be honest about what truly needs to go. The thing you are most stubbornly refusing to quit may be the thing that most needs to go. You may tell yourself you love it and can’t live without it but what is that habit really costing you?

For me, Coke was a no-brainer. I loved it like a brother but there was simply no valid argument for keeping it in my life. It has zero benefits. It is not only devoid of any nutritional value but actively BAD for me. And the energy I gain from using it is fleeting, only to be followed by the most vicious blood sugar crash, to which my brain says, “Drink more Coke!”  The cycle is never-ending.

Non-Coke loving folk might wonder why I just stop drinking so much of the stuff. Have one Coke a week, as a reward, they might say. But I can’t. I’ve tried that and it always turns out badly. So it has to go. For some, completely cutting out a bad habit might not be necessary. Maybe you can have two squares of dark chocolate after dinner. Maybe you can limit your wine intake to one glass a couple of nights a week. Only you will know what works best for you.

So goodbye, red can, how I loved you so! I’m drinking mineral water like a crazy woman. The occasional black tea is taking the edge off what I suspect is caffeine withdrawal. This part is not fun. But it won’t feel like this forever. And the part when I’m not drinking Coke and not constantly thinking about drinking Coke is worth riding this out for.

How to Break Bad Eating Habits

Kick Your Bad Habits With These 4 Psychological Tricks