International Women’s Day 2018: why it’s good for my sons as well as my daughter 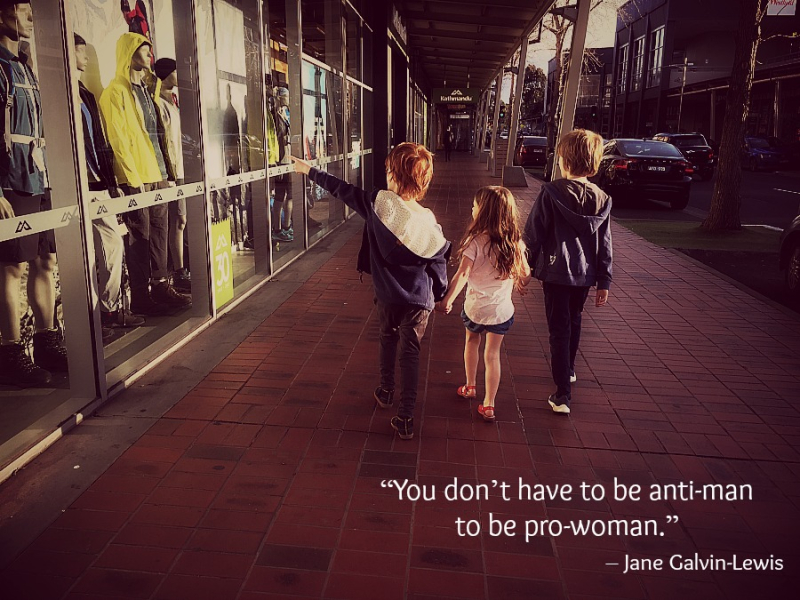 We have three children. Two boys. One girl. Brendon and I are raising all three of them to be feminists.

And it makes sense. From the Merriam-Webster dictionary;

feminism: the theory of the political, economic, and social equality of the sexes.

I can’t imagine raising my kids to have a world view that did not automatically advocate for gender equality. And more importantly, I can’t hope for my daughter to inherit a world that values her rights as a woman without first raising my sons to believe that women’s rights are human rights. Dismantling the patriarchy is a job for everyone – and it benefits everyone to do so.

If my daughter wants to be an orthopaedic surgeon, I do not want an entrenched boys’ club mentality to exclude her. If my son wants to be a stay-at-home dad, I don’t want society to question his masculinity. I think the time for gender to dictate who and what we can/should be is over.

I want to see toxic masculinity die a swift death so that my daughter AND my sons can be safer. I worry about all three of them going out into the world where they might be subjected to this kind of aggression.

So today on International Women’s Day, I #PressforProgress by raising each of my kids to respect themselves and one another. I’d like to teach them to follow their dreams fearlessly but I’m not sure how to do that myself. Self-doubt is a tricky thing to banish completely. So instead, I hope I am teaching them to follow their dreams bravely. It takes courage to be who you truly want to be. It takes courage to stand up and let your voice be heard. I hope they hear mine when I tell them they deserve better than the world they have inherited but that I believe inside each of them is the power to be the change they seek.