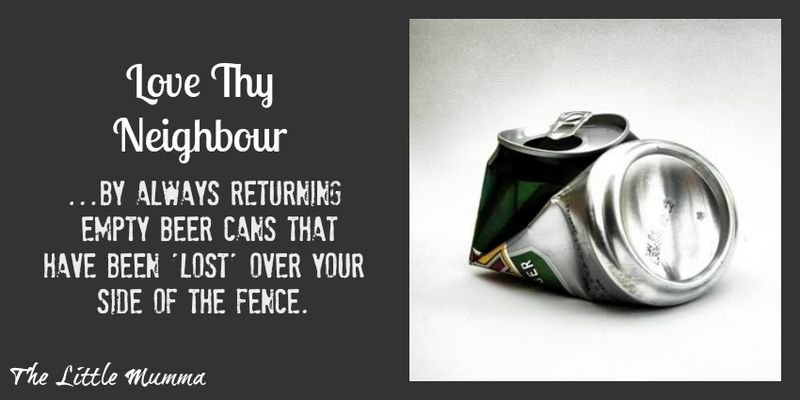 Sometimes in the early hours of a Sunday morning, in those hours just before dawn that we waste by doing things like sleeping, I like to hear tone deaf neighbours sing. In fact, if it were up to me, I'd choose a bunch of inebriated males, possibly celebrating the end of footy season, singing the theme song to 'Friends' loudly enough and badly enough to make Jesus weep.

And would you believe it? That's EXACTLY what happened this weekend gone. Instead of sleeping, I was treated to the beauty that is male bonding, bourbon-style. Sadly, there was no Khe Sanh but I live in hope. There is always next weekend.

You know, I'm a reasonable woman and I understand that not everyone is nearing forty with three kids. I get it. People still go out and people still have fun. I have not forgotten what it felt like to believe nothing was more important than a good time. You have a couple of drinks and the next thing you know, a stranger is doing tequila shots out of your cleavage. We've all been there. And even now I can appreciate that the only way to listen to music is LOUD. One morning, when I was living in a very small apartment surrounded by seven other very small apartments, I woke up in such a good mood that when "Beautiful Day" came on the radio, I cranked that shit to eleven and shout-sang with Bono because I was feeling the joy, man. My wall-sharing neighbour was not feeling the joy because it was 9 am on a Sunday morning and when he bashed on our front door to try and be heard over the noise, I immediately shut off the radio and went and hid in my room.

What I'm saying is I am not above neighbourly reproach myself.

But I don't recall that there was ever a time when I would discard of my beverage receptacle over a neighbour's fence. No matter how young and selfish I was, and I was both in spades, there is a certain level of etiquette that even my nubile little arse was mindful of.

So you know what, young neighbours? I don't begrudge you the all-nighters which have been semi-regular since we moved in 6 months ago. The kids sleep through your rousing sing-alongs and playful banter ("something something f*ck" "something something c*nt" *cue revving engines and belching*). But when I walked outside Sunday morning and found a beer can in my driveway, I felt like that was crossing a line – especially since it's not the first time cans and ciggie butts have made it over the fence courtesy of you and your adorable guests.

And just so you know, we have an excellent track record with neighbours. Without tooting our own horn, most people who have lived beside us have really liked us and sometimes that affection has turned into love. And if I'm lying, how come two of our ex-neighbours are best man and bridesmaid at our upcoming wedding, huh? Explain that. We're ADORABLE neighbours. Despite what some people say. We might compose angry letters and publish them on public blogs but we would never actually send them!

When Luca was first born, we lived next to a lovely family who would often chat over the fence to us. We were very friendly with them even though the husband inexplicably sorted through his bins at 11pm at night. The bins were located directly outside our bedroom window and this mystery bin activity was very, very loud. But did we complain? No. Because being a neighbour is about tolerance and forgiveness. And so we forgave Bin Laden. It was the right thing to do.

You're not the first bad neighbours we've had and you're unlikely to be the last. What get's me is that as I picked up that can and dropped it back over your side, I felt guilty.