Only A Monster Would Forget Father’s Day *waves* 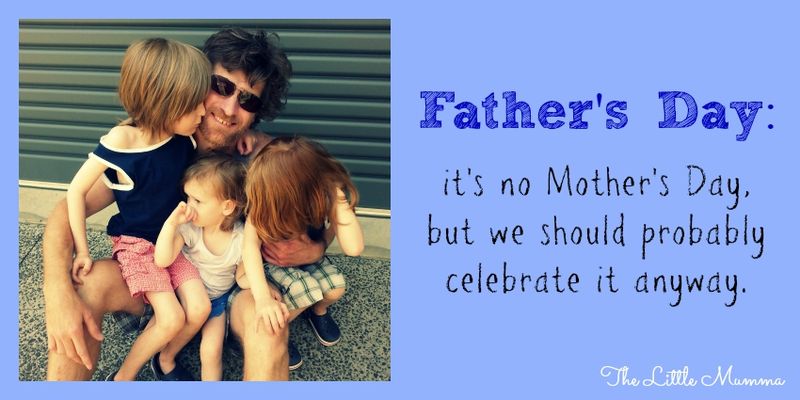 Father's Day sneaks up on me every year. Yes, it's the first weekend of September and how hard can that be to recall, but truth be told, after enduring each Melbourne winter, my focus at this time is on spring and spring alone. I am busy rejoicing in blossoms on the trees and temperatures in the double digits. Also, sunshine.

And so Father's Day sneaks up and admittedly, I'm thinking to myself, "Don't worry, Angie, it's the second week of the month, you have plenty of time!" and then it turns out that's Mother's Day and I'm covertly scribbling in a card on Sunday morning and telling Bren his present is 'coming soon'.

My own father is lucky if he even gets a phone call. Sorry, Dad.

I know. I suck. If Bren pulled this crap with me in May, it would not fly. And he knows it would not fly. He knows and he goes above and beyond to avoid that particular scenario. Also, I think he genuinely wants me to know he thinks I am an awesome mum to our three kids.

And I feel exactly the same way. I am an awesome mum to our three kids.

But this is not Mother's Day. It's Father's Day. The Day of the Father. He gets but one a year. And it's time to lift my game. No longer can I rely on the school stall back scratcher to cover off the gift portion of Bren's special day. Although who doesn't love a backscratcher?

From the moment Bren discovered we were pregnant ('we' - hahaha – not even close), he was so pumped to be a dad. And having survived the early years of our relationship and his premature penchant for a 'dad joke', I knew he was going to be amazing at it. When our firstborn, Luca, arrived, Bren was a natural. He strutted around with that tiny bundle in his arms and the pride simply radiated off him. He was the first man in the world to ever have a son. It was hilarious and beautiful all at once.

When Luca was a small baby, I admit, I didn't quite know what to do with him apart from the usual feed, bath, sleep routine, but Bren seemed to instantly know how to talk to a baby and more importantly, how to play with one. I was in awe of how naturally that playfulness seemed to come to him and watching him embrace silliness just to coax a smile or a giggle from our little boy helped me to loosen up. Bren was so much fun. And I wanted to be that way, too.

Fatherhood is a much evolved role and I am so grateful that Bren is the hands-on dad that he is. He was right there when our kids came into the world and he has remained just as actively involved ever since. Not that I'm congratulating him for being invested in the upbringing of his kids because in 2015, there's no excuse not to be. But I see enough to know that there are still plenty of blokes approaching fatherhood with a 1950s stand-offishness. For the sake of our little people, I'm glad Bren knows how imperative his role is.

Motherhood changes women on a molecular level. We never operate the same way again. We are hard-wired to respond to our kids in ways that I don't think men are. Case in point: I will wake to the smallest whimper from a sick child whereas Bren might sleep through a scream. But fatherhood has profoundly changed him, too. But it's less biological and more a conscious determination to be a better man. The drive to be the provider was never stronger than when he had three small people to think about. And so I have seen Bren push to be the very best he can be because he understands that three small children, two of them sons, are looking to him as the primary example of what it is to be a man. And he takes that very seriously.

But where the dads of old may have gone wrong is in thinking that being a provider was their primary and only concern. Being an excellent provider was the most important consideration and the nurturing was the sole domain of the mum. And while nurturing certainly comes more naturally to me, Bren's ability to offer the kids softness and kindness is so important to the development of their characters. A man can be empathetic and lose none of his strength in doing so.

In this same vein, all kids would prefer a dad who still has time to spend with them to a dad who works so hard to provide that he is largely absent. It's a tricky balance for every working parent. But Bren will walk in at 7pm at night and though I really just want the boys to go to sleep, he insists on giving them the promised 20 minutes of reading every night. Those are the things the kids will remember. Their dad worked so hard for them but he was there, too.

And so Bren deserves a fabulous Father's Day. Ideally, this would involve a beautiful and relaxing day spent without the children but sadly, this is real life and if it weren't for those three kids, he wouldn't be celebrating Father's Day at all. In fact, we'd probably be sunning ourselves in the Greek Islands but hey, we made our choices.

So the next best thing is to give this number 1 dad a really incredible Father's Day present. But what would that look like? It's probably different depending on the guy but I think women around the world share the dilemma of how difficult it is to select a great gift for a dad. There are only so many nose hair trimmers you can buy a man before he starts to get a complex – and it's hard to know how he'll respond when you write in the card "This nose hair trimmer can also be used on ear hair, just FYI. Love ya!"

This year, thanks to Adrenalin.com.au, I have an ace up my sleeve. Through a fabulous stroke of good fortune, I have been able to select a very cool experience that I know Bren will love and will never see coming. There are over 2,500 adventures to choose from, including the insanely popular V8 Car Drive and Ride or a Beer and BBQ Seafood cooking class. There are hampers with whiskey and hampers with red. You could pay to have your guy jump out of a plane or get a rub down in nothing but a towel (no, not like that). Flyboarding, shark dives, white water kayaking, golfing, horseriding, hot air ballooning, brewery tours, helicopter rides, defensive driving, paintball, quad bike tours, Harley rides, rock climbing and pregnancy massage. Hang on, what? Oh, they have stuff for the ladies, too. The point is that if you can't find something that the special dad in your life could enjoy then he's clearly the fussiest man in the world and maybe you should get him a big box of sweet FA. Or get him a voucher and let him choose. Easy.

So in summary, Father's Day is the first week of September, Bren is an awesome dad and Adrenalin has this year's Father's Day gifts sorted.

Check out Adrenalin.com.au for thousands of gift ideas including experiences all over Australia. Vouchers are valid for 18 months and express shipping is free for orders over $119. Just for readers of The Little Mumma, use the code LITTLEMUMMA for a 5% discount. This code will be active until December 31, 2015. Enjoy!