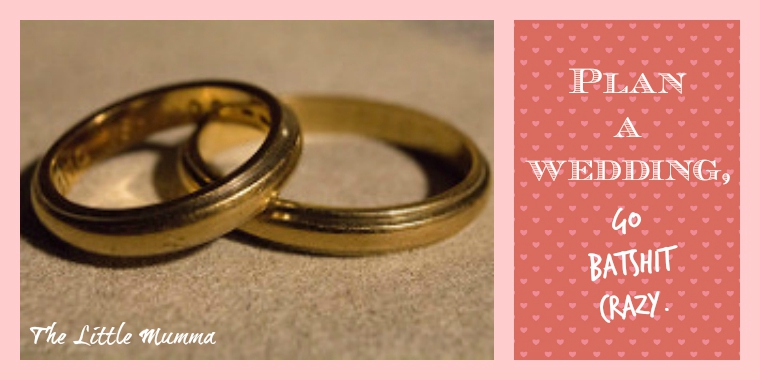 The day my mum paid the deposit on my wedding dress, I did a stupid thing. I went home and looked at wedding dresses online. Directly after deciding on ‘the one,’ I tortured myself with all the other possibilities I didn’t go with. I reasoned with myself about why those other gowns wouldn’t work despite how much I might love them, I unfollowed my favourite wedding label on Instagram and then I shut down my computer and walked away. I tried not to think too much about wedding dresses as I waited for mine to be created.

Three months later, the call finally came. My dress was ready. When did I want to come and try it on? I stalled, this week was busy, I wanted to bring my bridesmaids to see it, maybe I’d come in next week. But secretly, I was terrified. The dress I had chosen was a custom design, the structure of one gown with the fabric of another and other alterations, too. So essentially, I had never seen this dress and never tried it on. What if what I thought I wanted didn’t turn out to be what I wanted at all?

I avoided that dress for more than a week because of a nagging feeling that told me I was not going to like it.

Finally, I gathered up my courage and faced down my fears, an excited bridesmaid in tow.

As I stepped into the gown, I knew. As I stepped out from behind the change room curtain, I knew. And as I stood there on the little box they make you stand on, to a chorus of ooohs and ahhhs, I tried my best not to cry.

I hated my dress.

I stood frozen as my bridesmaid took photos and marvelled at how tiny my waist looked and how flattering it was on my bum. I plastered a smile across my face.

The dress itself was beautiful and exactly what I had asked for, but I could not for the life of me remember why I had chosen it. It was classic. It was elegant. It was safe. And it was as boring as hell.

It just wasn’t me.

Back in the car with my bridesmaid, I confessed. She conceded the dress currently lacked ‘pop’ but that it would be easy to embellish and make it something I could truly love. She assured me it was very flattering on my body despite my suspicion that it made me look like a rugby player. In short, she talked me down from the ledge and if that doesn’t make her an ideal bridesmaid, then I don’t know what does.

When I got home, I told Bren. And god love that man, he told me I should just buy another dress. I told him the one I thought I really loved could only be tried on in Queensland. “Then fly up for the day!” he told me. He just wanted me to be happy.

I think because he was so willing to let me do whatever it took to get the dress I loved, I realised I didn’t need to be so extreme. With a bit of thought and a whole lot of Pinterest surfing, I could come up with a workable plan to pimp my dress. A few days later, I went back to my dressmaker to discuss my ideas and with the help of another incredible friend who asked all the pertinent questions that I would not have thought of, we had a solution. And it only cost me a couple extra hundy.

And so the wedding dress crisis of 2015 has been averted.

But seriously, I am not going to miss this shit. Planning a wedding is HARD. And if you have a history of anxiety and general batshit craziness, then planning a wedding will break you. Several times over.

After Dressgate, I spent several days under a fog of despair. I woke in the morning with a tightness across my chest. It was generally no later than 5:30am but I would have to get out of bed to stop myself from thinking. I’d turn on lights and the radio to reduce the isolation I was feeling but it wasn’t until the kids woke up that I was able to really shake the darkness.

Then last week, there was a hiccup with our wedding funds and the anxiety was so intense that I felt the only way to make it stop was just to cancel the whole thing.

And that’s the thing about mental illness. It is scarily good at sneaking in through the smallest cracks, no matter how well you may have been travelling previously. And though I am tempted to protect myself by avoiding situations which make me vulnerable, what kind of life is that? Someday my kids might ask why we never got married and I would have to tell them it was because I feared it would make me too anxious. And the lesson would be that I avoided doing things I wanted to do because of the fear of what ‘might’ happen.

In this case, it DID happen. In just the last month, I have faced down some arguably worst case scenarios when it comes to organising a wedding and lived to tell the story. Things are okay and I am okay and we’re going to get married because it’s important to us and also, we really need a party.

And in case I had any worries about the guy I’m marrying, there’s this. I left this piece open on my laptop while I was working on it and unbeknownst to me, Bren typed the following message about my dress:

This guy is so awesome, I can't even believing it, too.