Am I crushing my kid’s creative soul? 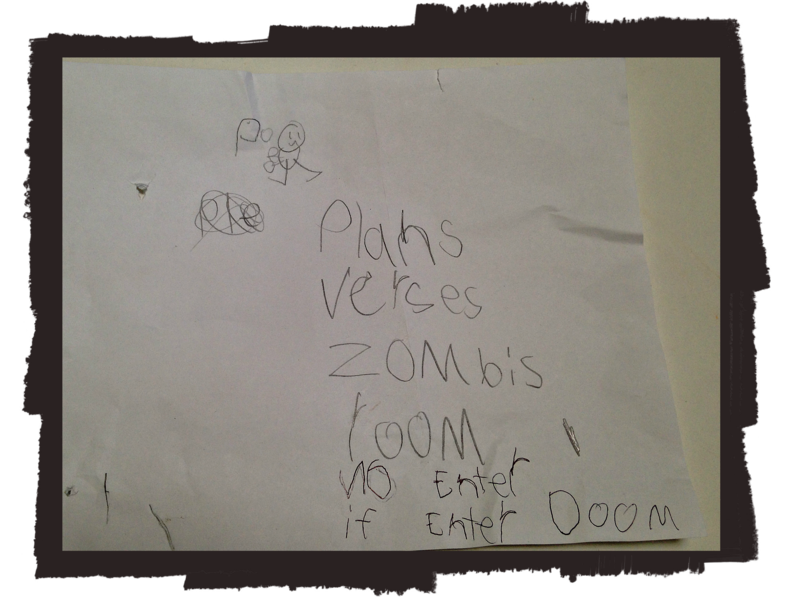 For the longest time, I thought Luca couldn’t draw. While his female kindergarten contemporaries were creating colourful and detailed masterpieces of their families standing in fields of flowers, Luca was hard pressed to scratch out a stick figure.

I later learned the major issue was his fine motor skills and as they developed, he began to draw for fun a whole lot more. By school, he was creating elaborate scenes from his favourite game, Plants vs Zombies.

The drawing itself wasn’t particularly sophisticated but they were incredibly detailed pictures, entire pages filled with zombies and peashooters and sunflowers in the midst of battle.

I thought they were super clever until his school friend drew him a Transformers picture. Bumblebee, Optimus Prime and some other guy, easily recognisable (if you know who all the guys are) and coloured inside the lines.

I found myself encouraging Luca to use colourful textas even though his preference was to draw with pen. When I asked him to colour things in, he scribbled furiously on top of what he had drawn, not even trying to stay within the lines. Made my eye twitch.

Luca’s zombie pictures could not have been more creative or more HIM but I was passive aggressively attempting to change the way he did them. And in the process, probably eroding his confidence.

He draws a peashooter. Next he draws the peas being fired at the zombies. “Pschew! Pschew!” he says as he forms each circle. His imagination is in overdrive as he draws the picture in his mind. He is completely engrossed. He’s probably sticking his tongue out. It’s a beautiful thing to behold.

And then later, he’ll talk me through the picture and though the piece of paper he puts before me is a chaos of blue pen lines, his description of what is going on within those lines is vivid with colour and life.

Of course, art is one thing. Its subjective nature means there is space for individuality. It’s unlikely that Luca will go on to have a career in fine arts, but that doesn’t exclude him from the process of creating.

But within the framework of a school education, the pressure of doing things in a particular way becomes more rigid. And though there are many excellent reasons for learning how to complete a task following the directions you have been given, what aspects of individuality must be traded or ultimately lost?

Out in the real world, within a real employment situation, most of us will be called upon to perform a job in a certain way. Achieving this goal will mean forgoing flexibility or creativity. Most of us, at least at one time in our lives, will have a job like that. And those jobs are good for us. Discipline and focus are important, even when what we’re doing may not be personally fulfilling or even enjoyable. Sometimes we just have to get a job done. There is value in learning this.

I will be demonstrating this lesson early on when I teach the kids how to clean the toilet.

But while I want my kids to grow to be people who are reliable and hard-working even when they don’t LOVE the task they’ve been given, I would hate for them to end up in careers in which their individual talents and creativity are never utilised – unless they can fulfil those desires sufficiently outside of their working life. A balance is key and what I think we ‘grown-ups’ are all searching for.

But in school, I’ve been worried my kid isn’t doing it right. And envying kids who are doing it righter than mine. While some kids in his class have neat and even handwriting, Luca’s is still crazy – some letters big, some letters small. He’ll bring home school work where words have been transformed into creatures, letters have eyes and jigger jagger sharp teeth. It’s fucking cute but does it mean he became distracted from the main task? I look on disapprovingly, seeing his work through the teacher’s eyes – a mess. When I point out that his work is hard to read because he’s drawn all over it, he is confused. “But it’s funny, Mum,” he’ll say, chuckling at the genius of his own work. And he’s seven years old. If you can’t turn your letters into creatures when you’re seven, when can you?

I was always told my writing was too big. I envied the small, tight writing of other students. I tried to copy it. But I later read that big, loopy writing, writing like mine, is an indication of a creative and extroverted personality and suddenly, I loved my writing. I realised it was a true expression of who I was and I owned it proudly.

I’ve been getting uptight about Luca’s school work and in doing so, I’m sending him the message that he’s doing it wrong. But what I want to say is that I think he has the most hilarious imagination and I never want him to lose it. But he still needs to get his work done. Sometimes there will be room for personal expression and sometimes there won’t. And that’s okay. That’s the world.

When the time comes for him to sign his first official document, I’m confident he won’t do so in letters that dramatically increase in size and then exclaim to the closest person, “Look! It’s a giant A! Arrggghhhhhhh!”

Luca WILL grow up. Because we all do. But growing out of our wild imaginations is about the saddest thing that can happen to a person, and a too strict adherence to what’s ‘correct’ is a surefire way to ensure that little death.

So I’m working on my reaction when Luca colours outside the lines. Maybe colouring outside lines is a sign of mind that can think outside of them, too. And my own perfectionist streak has been more of a hindrance than anything else because perfection is a fallacy and the quest for it is a very disappointing road to travel.

And some day my kid will stop drawing jigger jagger teeth on his letters. Some day his work will look a lot like everyone else’s.

Why am I in such a hurry for that?