Not winning at motherhood….or am I?

Now I know you might be thinking, Angie, do you even lift? And the answer is, if you must know, I have suspended my gym membership for two months because I can't afford to get to the gym only once a week – financially, it's expensive, but even more costly is the 6 other days of the week I punish myself for not being at the goddamn gym.

I am feeling like I should have been born a bear. Everything is harder in winter and sitting the whole thing out snoozing in a cave seems like the best solution. But seeing as how the kids can't even sleep past 6:30 most mornings, it might be tricky to have them in the cave with me. Actually, I recall falling asleep on Luca's toddler bed one afternoon years ago and when I awoke, I was wearing a bright, yellow construction hat and had 37 picture books stacked directly against my face. If that was the work of a 2-year-old, I think it would be dangerous to be asleep in a cave with all three of my kids.

Anyway, the point I'm trying to make is I don't feel like being a mum right now. It just doesn't sit right with me. It's not them, it's me. Well, it's a bit them but mostly me, and I don't know how to break it to them. When they ask for simple things like a drink of water, my brain tells me they have asked me for a pint of blood. Squeezed from a stone. Which is possibly my heart.

"Okay, bedtime!" I singsong. But it's only 4:00 pm and they ignore me. Unless they want a drink of water. And they always want a frickin glass of water, man.

The point is I have a black heart and I'm not fit to mother a Cabbage Patch Kid. Actually, that's not true, I've been good to Lorola Trina and when Ziggy jams her face in-between his bed and the wall, I always rescue her.

This isn't about Lorola either. Or how I should have changed her name to Tiffany or Denise. But when someone gives you a name, even if he is a sick bastard who tattooed his name on your arse and sold you in a box, you have to keep it. Your name is your name. Unless your name is Mandy Rogers in which case, Portia de Rossi will work much better in Hollywood.

The point is that Luca was meant to get in the shower tonight and he was dragging his feet as he so often does and I was just about to go apoplectic on his arse but instead I went to look for him without saying a word.

I found him in the lounge room, lying on the couch. I thought he was being emo about something and was about to resume apoplexy when I realised that curled up within his little body was another little body. He and Harlow were hugging it out on the couch. I just stood leaning against the doorframe, dying inside.

Sometimes you think you can't take another step without collapsing and then something cracks you wide open and refills everything that was empty.

I wish I could show you an image but I didn't take one because I just had to be there and see it with my own two eyes.

It appears I am raising loving little people who love one another.

I was so busy filling the Cons column today, it was nice to make an addition to the Pros. 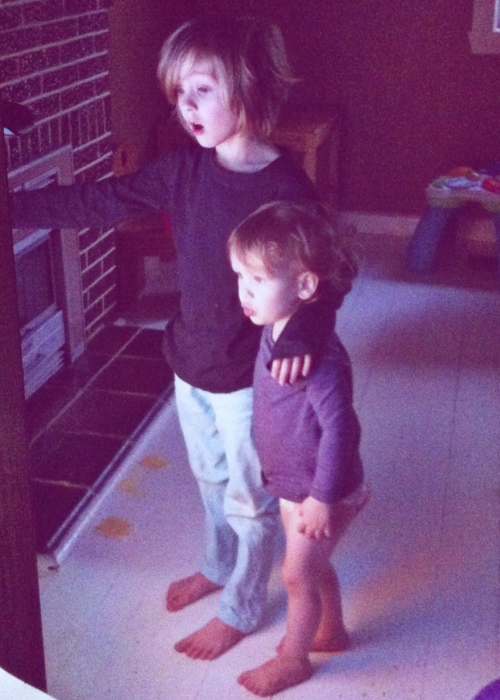