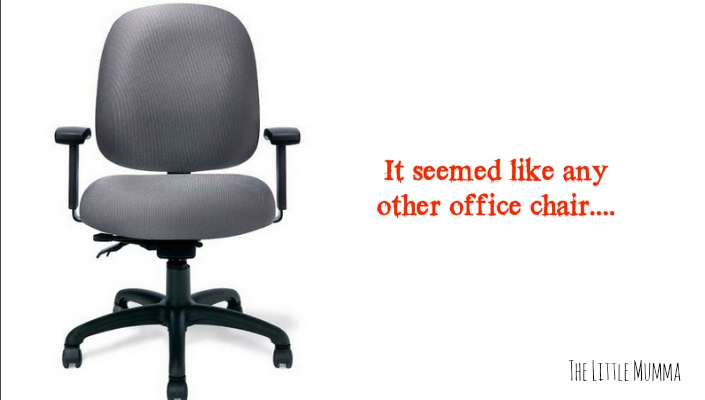 I noticed immediately that someone had switched my chair. When I sat on it, it felt strange and sort of flat the way an office chair gets over time when too many bums have sat on it – like the cushioning is all but gone. I hate that kind of chair and my regular chair didn’t feel like that.

Being a part-timer at the call centre, it was a challenge to keep my work station in order since other people were likely to sit at it on my days off. It was also a challenge because I was a 20-something part-timer, what did I care about work stations? But a good chair adjusted to one’s specifications was a crucial part of the job. A good chair was everything. Returning to work to find someone has swapped your chair is like the worst thing that can happen. At a call centre.

So straight out the gate, I had issues with the chair.

But beyond the obvious comfort issues of this imposter chair, there was a smell at my work station. A really, really bad smell.

It would come in wafts and then gradually dissipate. I checked the bin, I smelt the desk surface. I could not locate the origin of the stink. The nature of my job required that I get up from time to time to speak with a supervisor or obtain paperwork and it was on my return from those little jaunts around the office that I finally realised. Each time I sat back down on the imposter office chair, the terrible smell hit me.

Naturally, my first thought was that it was me. I was the source of the stink.  I hurried to the bathroom and tried to smell my own butt. This was insanely difficult and gave me a newfound respect for animals that can freely lick their own privates. I was grateful to determine that the smell did not appear to be coming from me but it was certainly on my pants. Though I cannot claim to have been the most domestic 22-year-old, I was fastidious about clean clothes and I knew without a doubt that these pants had not smelt like this when I left the house that morning.

I hurried back to my work station, casually lowered my nose to the seat of the office chair and immediately reeled back in horror. On its surface, the fabric of the chair was without blemish, no visible stains, nothing to give away the horrors within. But there were horrors. This chair smelt like arse. Pure arse.

Now the smell of arse should not be confused with smells the arse can make. It's not so much the smell of something that comes out of a butthole as the smell of the butthole itself. The smell of arse is something entirely unique, no doubt made up of elements of bodily functions but with an added olfactory layer of deplorable hygiene.  It’s just a dirty, dirty smell and I had been sitting on a chair that was scented with an au de parfum strength. Au de anus.

And now the scent was deeply embedded in the fabric of my pants.

I did what anyone in my situation would have done. I switched chairs with an unsuspecting colleague and then I emptied a can of Impulse onto the back of my pants. I just sprayed and sprayed and sprayed. I sprayed until I could spray no more.

Then I got on with my day as best I could.

Normally, I would have headed straight home after work and given those pants a thorough scrubbing and soaking. Or possibly lit them on fire. But unfortunately I had a networking event on in the city and needed to head straight there after work.

These events were less successful in a networking sense but ultra- successful in a catching up with acting friends sense so there I was, sitting at a booth with a bunch of lovely people, probably on my second glass of bubbles and therefore, absolutely on fire in that loud, drunky way that I have always assumed is adorable but is possibly eye-gougingly annoying but champagne, weeeeeeeeeeee!

Someone in the next booth gave me a tap, tap on the shoulder and I turned around to see who it was. As it turns out, it was another friend sitting with his director friend and naturally, I wanted to network with that guy. I was sitting in between two other people at my booth and so in order to chat to the people in the next booth, I had to turn my back to our table, kneel on the seat and lean over the backrest of my booth to peer into the other. If you’re following my description, you’ll understand that this put my butt at roughly face level with the people sitting either side of me.

To reiterate, this put MY ARSE PANTS at FACE LEVEL with the PEOPLE BESIDE ME.

Worse still, one of the actor friends sitting beside me was Kat Stewart. Yes, that Kat Stewart. Billie Proudman, Roberta Williams, major Australian TV star who was wildly talented even back then when nobody knew her name.   Even then, I knew she was going to be somebody and so had a major girl crush on her. To think that she was face level with my arse pants as I chatted animatedly (drunkenly) with the people over the next booth, waving my offending butt around like a fool mortifies me to this day. Add in the humiliation of this encounter, you can understand why I hope I never see Kat Stewart again. Except on my television screen being the goddess she is.

Of course, I have no idea whether she could smell my pants that fateful night. Maybe the Impulse was successfully masking the arse smell but then the scent of Impulse is reasonably offensive, too. I can only imagine that Kat Stewart left that event judging me in one way or another. Months later, we had a back and forth text session about meeting for lunch and it never eventuated. Naturally, I blame the arse pants.

I don’t know what ever became of the arse chair. Or how it came to smell like arse in the first place. Thankfully, I never encountered it again. But the memory is burned into my nasal passages forever more. And possibly in Kat Stewart's, too.