That One Time With Kat Stewart

**Note: this post was written back in 2010 but for some reason, the link to the original post is broken so I'm republishing it here so I can link to it in another post. You can tell it's old because I use phrases like "That's just how The Little Mumma rolls." Five years have passed and phrases may have changed, but rereading this now fills me with equal if not more embarrassment than it did the first time around. Enjoy.

Let’s get totally random and talk about my day last Saturday. Grand Final Day. A day that involved zero AFL, a lovely amount of MTC theatre and way, waaaaay too much Kat Stewart.

You know Kat Stewart. That fabulous Australian actor? If the name doesn’t ring a bell, this should;

So a bit of background – Kat and I did acting classes together in 2001. After that, we caught up for dinner. After that, we emailed back and forth with intentions to meet up for coffee. We never did, time passed and when I thought about dropping her a line again, I had lost her details. 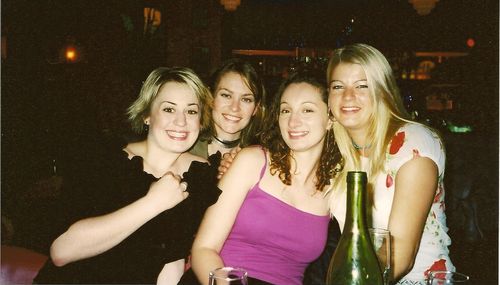 The Little Mumma goes to dinner with Kat Stewart! See? See! That's her, second from the left. I'm not in it because I was taking the photo. Duh! Also pictured are fellow classmates, my dearest Tor, Rosa, and Melissa King – who is now a tv superstar, too. Hey, that's just how The Little Mumma rolls…… 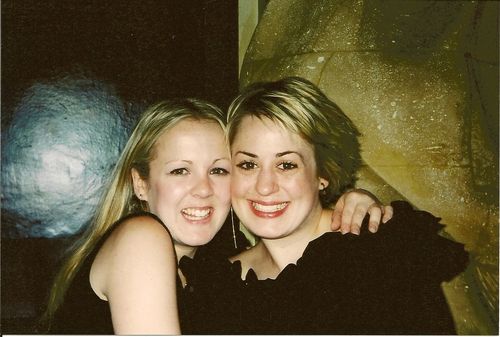 Okay, I sense your mistrust. Here's a pic of me and Tor from the same night – and you can tell it's the same night on account of Tor's hair and outfit. See? See!

More background – even then, it was obvious to everyone in our class that Kat was exceptional. That if anyone was going to ‘make it’, it was her. For that reason, every week without fail, I chose her to be my reader during scene work. She was a few years older than me and I found her to be incredibly poised as well as talented. And if I’m being really truthful, I probably had a bit of a girly crush on her. The acting class we did together was the beginning point to me taking my career seriously and so was a formative moment in my history. It made an impression on me. And so did Kat.

Am I sounding a bit like a stalker? Well, keep reading. It gets worse. Much, much worse.

Interval. I am sitting with my good friend, Saucy. We are chatting about how we were liking the play (we were) and how we were enjoying being away from the kids (we really, really were) when I saw Kat Stewart coming towards me. I must have made a little squeak of recognition because beside me, Saucy was saying, “Yes, it is” in what I assumed was her also recognizing Kat aka Roberta Williams, everyone’s favourite character portrayal in recent Aussie TV history. I say assumed because we didn’t discuss this any further. We couldn’t discuss it further on account of I had positively leapt out of my chair to get at Kat. I pounced. I came close to landing on top of her (“You were fast!” Saucy would later accede when I quizzed her on the extent of my humiliation).

Below is a transcript of what followed. Please note that after each sentence of dialogue that was actually spoken, I have helpfully bracketed what I think may have actually been going on in the speaker's mind.

Me: (frothing at mouth) Hi Kat!

Me: (oh fuck, she doesn’t know who I am!) (Panicking) I’m Angie. Do you remember we did that class together?

Kat: (Who the fuck is this person?) Oooooh, YES! Angie! How are you?

Me: Oh great.  (She doesn’t fucking remember me. I want to die.) Anyway, I just wanted to tell you that I followed your career traje..trajectory and even during those classes we always knew you’d go on to do amazing things.

Kat: Oh, thank you. That’s so nice. Gosh, how long ago were those classes anyway?

Me: Well, I’m thirty-three so I guess it’s been, like, ten years? (Oh Christ, Angie, you haven’t spoken to her in nearly TEN years. What are you DOING? I’m think I’m going to vomit.)

Kat: (like the gracious saint that she is) You know what I always remember about that class? Remember we had to go around in a circle and say what we thought everyone would be cast as just based on their look? I’ve never forgotten I got ‘cocaine dealing nun’! (Laughs)

Me: (also laughing) Hahaha, yeah! Well, I suppose you’ve kind of lived up to that in a way! (Just stop talking. Just don’t say any more words, Angie)

Me: Yeah. And I just always meant to contact you but I lost your number (Oh fuck, stalker alert! Words, Angie! Don’t say them!)

Looking around in a panic, I notice a very familiar face coming out of the ladies bathroom.

Girl and Kat exclaim at eachother.

Kat: (To girl) Good to see you. (Turns to me) And you two know eachother?

Me: (Shit, shit, shit! I don’t know this girl at all. I only know her face because she is DIDGE FROM NEIGHBOURS! OH FUUUUUCK!) No, no….it’s just a fan thing (What the fuck? What am I talking about? Fan thing? Craaap!).

Kat: We did a class together. (Apparently)

Kat: (Pulls face like, “We’re getting old!”) Oh wow! I guess I should get around to that soon!

Kat: Yes. Yeah. So I suppose I’m half way there!

Me: Yep. (Wracking brains for something to say) (Tell her how last time you spoke she was dating L*** and lived in K**. No! Don’t say that! She wouldn’t know you from a bar of soap and you can quote her life back to her? Move away stalker)

Me: Well, it was great to run into you. (I’m so sorry. Please forget this ever happened)

Kat: Yeah. Take care! (Quick, take down the main points of her features just in case you have to pick her out of a police line-up)

Me: Okay… Bye! (I bet she’s taking down the main points of my features just in case she has to pick me out of a police line-up)

I sit back down and turn to Saucy, “Excuse me for a moment. I just need to GO AND KILL MYSELF!”

Kat Stewart and I knew eachother briefly some nine years ago. At the time, I would have described her as a friend. Not a close one. But a friend. And in recent times, when people had talked about her, I mentioned I had known her…and maybe still referred to her as a friend. The key points are these; I did think she would remember me and I didn’t realise so much time had passed.

Funny how fame changes things though. If I ran into someone I went to school with even twenty-five years ago, I reckon I could go up and say hello. They may or may not recall me and it could be awkward but I wouldn’t feel like a loser. But because Kat has enjoyed so much success as an actor in the time since I have known her, unless she clearly remembers me, I am going to come off looking like a rabid fan or worse, a wanna-be. I totally became the, “Hey, remember me? My mum and your mum used to go to the same hairdressers? We should hang out!” Oh god.

In the aftermath, people have been kind. B and my mum, Betty, have assured me it was probably not nearly as bad as I’m recalling it. And I allowed myself to be comforted by that. Until today, when my dear friend Tor (yes, the very same Tor from the above photo), on hearing the story, said, and I quote;

And with best friends like my Tor, who needs Kat Stewart!