Harlow is 3 and I made a reasonably awesome Frozen cake! 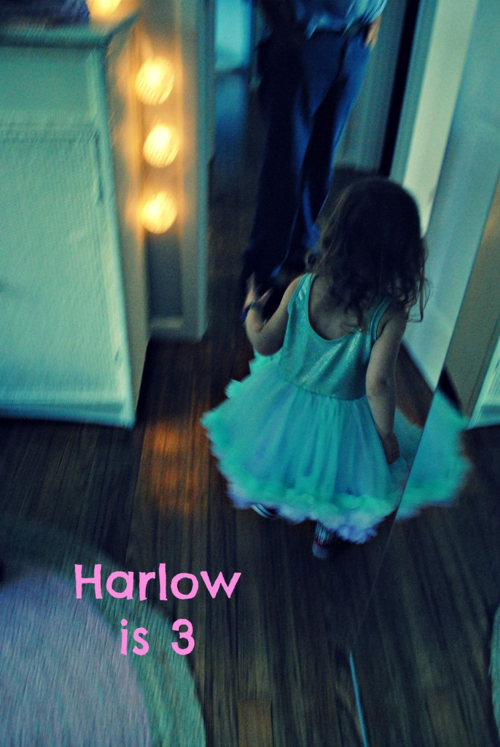 Anyone who follows along on my Facebook page will know that I promised to share this post over a week ago. But then everyone – and I mean all five of us – have been struck down with varying degrees of winter colds. It has been, in a word, balls. This time of year – great for colourful foilage, absolutely shitful for immune systems.

But let's go back to a time before the sickness, a time of disbelief that my baby is not really a baby any more and even further disbelief that I made a multi-layered birthday cake without panic or despair.

Shall we cut to the chase and admire my handiwork? 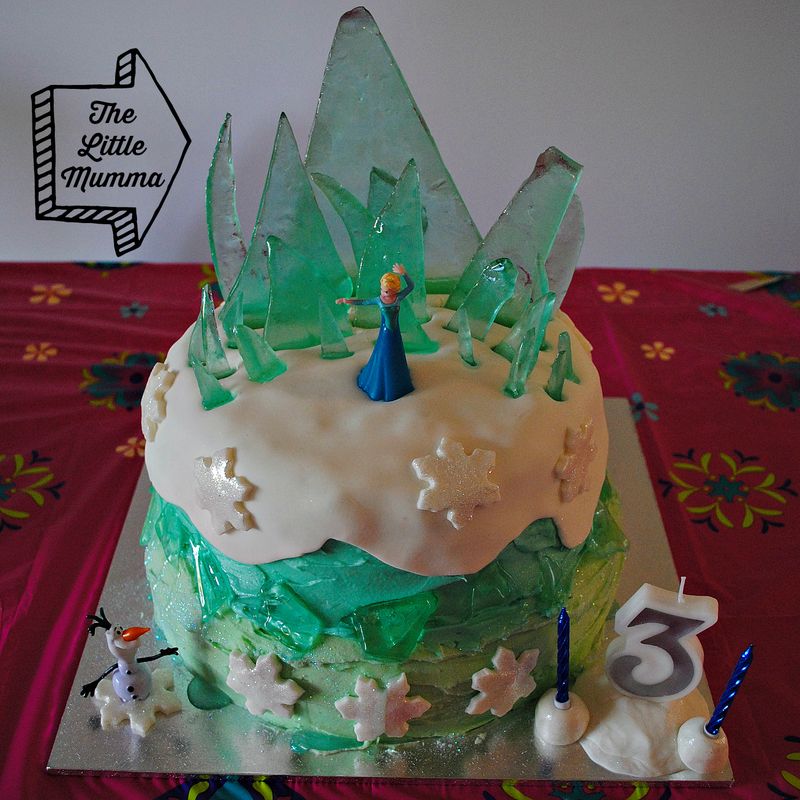 Okay, so I'm not going to start my "Angie's Awesome (and reasonably edible) Cakes" business from home, but I think it's fair that we all pause for a moment to be impressed. Because this thing has three cakes in it – one of them egg-free, a layer of chocolate ganache, buttercream icing in two shades of the Frozen palette, a snow layer of white fondant, fondant snow flakes, two types of edible glitter and the piece de resistance, the hard candy ice shards which, to be honest, are not safe for children being that they are sharp like glass and could absolutely put an eye out if the birthday girl slipped while blowing out the candles. They sure do look good though, right?

But no matter how fancy it looks, the true test of cake excellence has to be in the eating. 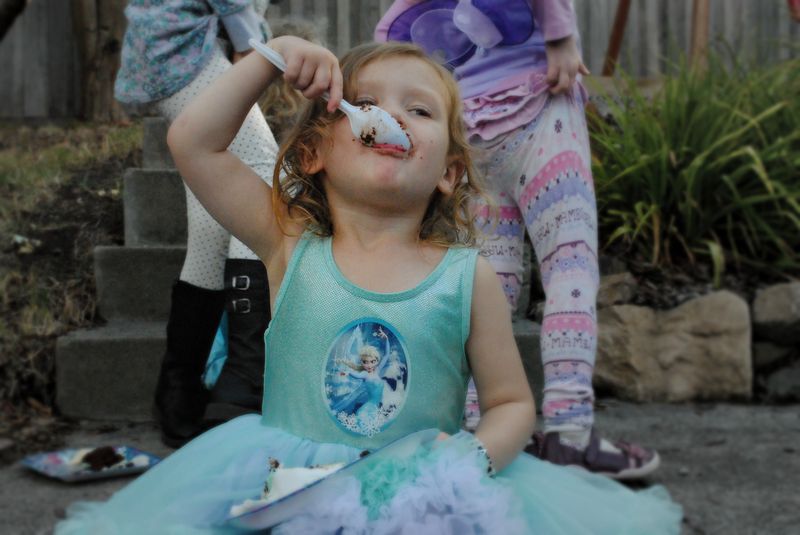 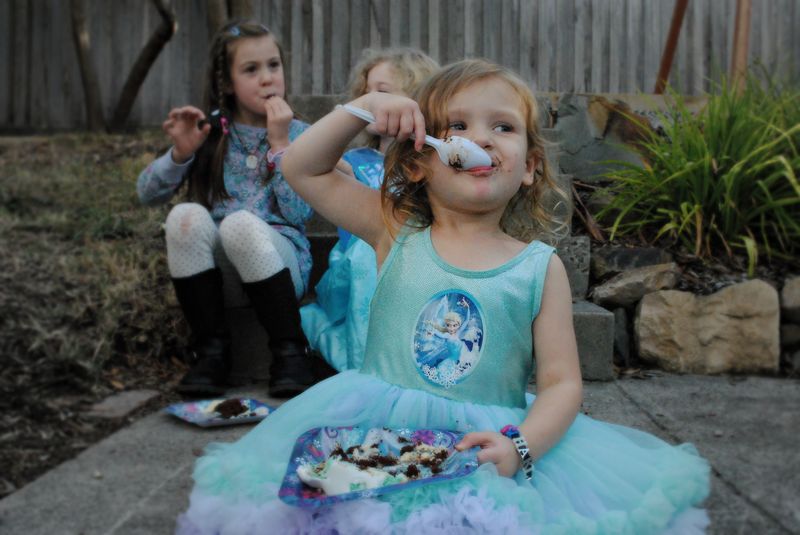 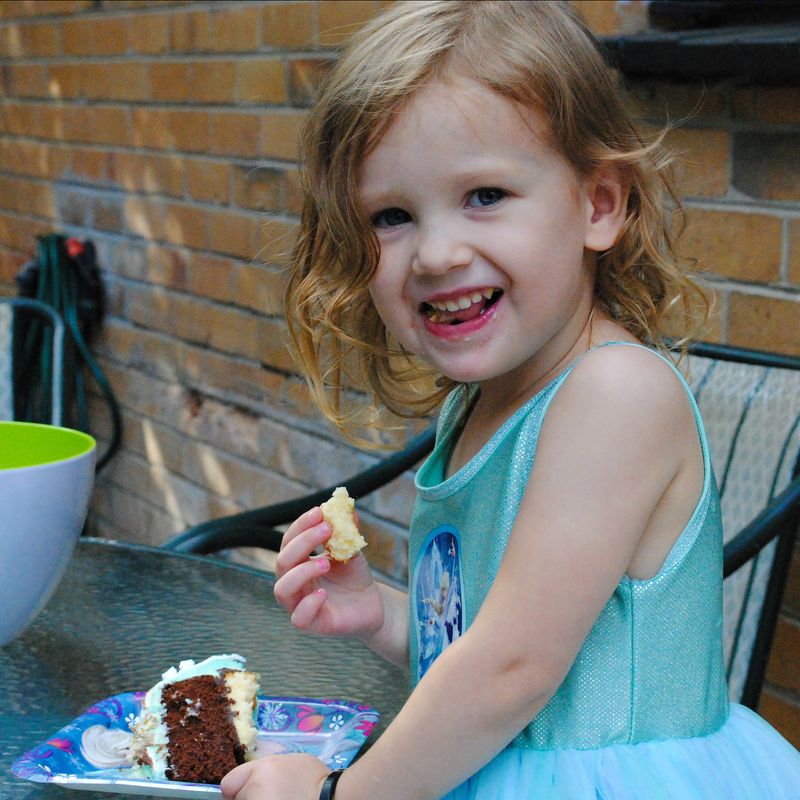 Thank you to my absolute peach of a photographer friend, Stevie, for capturing the compelling evidence.

If you're interested in making a cake like mine, here are my terribly inexpert tips and the links I found uber-useful.

Here is my original inspiration for Harlow's cake. I thought the ice shards looked AMAZING! You'll see that they link to their hard candy recipe – I followed this exactly except for all the talk about needing a Pyrex jug to pour with. This is only necessary when you want to set the candy in moulds. For the ice shards, you're simply pouring into a foil lined baking tray so straight from the saucepan is fine – you don't need the precision of the jug spout. Also, I didn't bother with a flavoured oil. I don't think it needs it. Apparently, they tasted great – and why wouldn't they? It's sugar that looks like pretty glass!

* The recipe calls for Corn Syrup which may be difficult to find in Australia. I found Glucose Syrup in Coles but check that it is corn-derived before buying it. Apparently, not all glucose is made from corn.

* Do use a candy thermometer. I read of people having to make the candy again and again before they got the right consistency – the major issue being the candy never setting hard and glass-like. I got it first go – unheard of for me – by following the above recipe. Heating the sugar to the exact temp is crucial and you can't do that without a thermometer. They're not expensive – here's one I found for under $4. But they do get really effing hot as my friend Sally and I found out the hard way. Use an oven mitt, friends!

* Make two batches. Even if you nail the consistency first go, the trouble can begin when you try to break it up into 'shards.' It's hard to get nice, long pieces. Make sure you don't make the candy too thick – definitely no more than half a centimetre or it will be too hard to break but obviously no thinner or it will shatter too easily. I only made one batch and I got enough pieces to make it work but it would have been ace to have a spare sheet to work with to see if I could nail another nice, big pieces. I ended up with loads of smaller pieces which I decided to decorate the sides of the cake with. Ice shards for everyone!

* Put the ice shards on the cake at the last minute. I stuck them in the night before and by the next afternoon, they had started to ever so slightly melt. Where originally the pieces had nice clean edges and points, they were now slightly rounded. From an OH&S point of view, this was probably preferable given that the cake was meant for a very small child, but I was disappointed that the shards no longer looked like prison- quality shivs. Also, they had started to lean instead of standing up nice and straight. So prepare the shards beforehand but keep them in the fridge until just before you want to present the cake.

* I used only a single drop of blue food colouring and this was perfect. It really did look like glass. Also, I put it in at the very end of cooking once the correct temperature had been reached.

* Shard splinters are a thing. I got one, no shit. So it might be an idea to file down really sharp edges.

I have finally learnt that cakes do not need to be baked at midnight the night before the party. Baking ahead of time and chucking them in the freezer until you need them has two distinct benefits. The first, you're not baking at midnight, and the second, frozen cakes are MUCH easier to ice. I made one from-scratch butter cake and two packet cakes I already had. I generally use a packet mix cake with No Egg as a substitute because of Luca's egg allergy. Of course, packet mix cakes are never as good but I use them because I find they adapt better to substituting eggs than a from scratch recipe. I am still searching for the perfect egg-free cake and will let you know when I find it.

So I made one layer of cake egg-free for Luca and then another quite dense chocolate cake (a Donna Hay packet mix which I think is really yummy) which I joined to the egg-free layer with chocolate ganache (egg-free cakes tend to be more fragile which is why I doubled the top layer). Then I made a double batch butter cake for the bottom layer. I used this recipe which was easily adapted to make in my Tefal Cuisine Companion. I made all three cakes in the CC and definitely noticed it made the whole process much simpler. Adapting recipes to suit the CC was intuitive and straightforward. I am not a confident baker. I am more of a 'batter on the ceiling, I'm losing my mind' kind of baker. For blood pressure reasons alone, the CC was a winner.

* Bake ahead of time and freeze. Seriously. This is the only way to stay sane.

* Smoosh some chocolate ganache between layers. Because CHOCOLATE GANACHE. The end.

* If you're making a cake with multiple layers, make sure each layer has a difference of at least a couple of inches, otherwise your cake will end up looking weirdly tall and awkward. Like mine.

* If you have kids with allergies coming to your party, think about catering for them where possible. I know, I know, it's a pain in the jaxsy, but it sucks to be the kid who always misses out.

So I did 2 batches of buttercream icing in the Cuisine Companion (try doubling this recipe) and the trickiest bit was getting the colour right. In the first batch, I put just a couple of drops of blue colouring in, and afterwards, I decided it was a bit too green. So I put one or two extra drops in the second batch and was happier with the colour. What I wanted to avoid was a really strong blue icing. I did the bottom layer with one batch and the top layers with the other so there are two tones of icing. I am saying it was all on purpose.

Over the very top layer, I used a sheet of white fondant which I'd used a pastry cutter to make swirly 'snowlike' edges with. I have always been deathly afraid of fondant but it was seriously easy. Using the leftover fondant, I made snowflakes with a snowflake shaped cookie cutter. I sprinkled them with a silvery glitter and stuck them at even(ish) intervals around the top of the cake. I had a different shade of glitter, a silvery blue, that I used on the blue icing. It was quite the bedazzled cake.

* Don't be heavy-handed with the food colouring or you'll end up with a very strong blue rather than a nice pastel. Add a drop at a time, mix thoroughly and then add another drop if required.

* Once you have finished icing the cake, pour water over any leftovers IMMEDIATELY. Failure to follow this step will result in you eating the leftover icing. Apart from the fact that this will ultimately mean you've just eaten a cup of sugary butter, your teeth will feel like they're on speed. No, I don't even know what that means either, but I stand by my statement 100%.

* Don't be scared of fondant. It's pretty straightforward. Check your supermarket BEFORE heading to a specialist cake shop to buy it or you'll spend three times as much as you need to. *insert duped face emoji here*

Moving house had well and truly thrown me all out of whack so I really did decide the week before Harlow's birthday to do a Frozen theme. I found cups, plates, napkins, a tablecloth and Happy Birthday sign at K-mart, and there are a bunch of printables to be found online. I was all set to print out these food labels to make cute cards saying things like "Hans Frozen Hearts" and then I realised, Harlow can't fucking read. Where possible, go with easy, that's my new motto. But definitely DO make the frozen hearts. They're strawberries dipped in melted white chocolate. ALL THE YES. They went so fast – Harlow hoovered about 37 of them single-handedly.

For more Frozen party inspiration, you can't go past Pinterest. I've created a board here and it's got loads of ideas for party food, games and more. If you love a DIY, take a look!

For further cooking inspiration, try another blog. For serious. I can't help you.