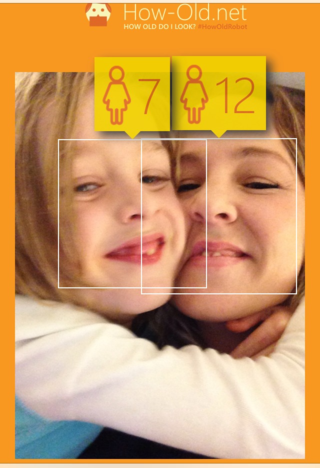 Maybe How Old knows me better than I know myself. #12yearsold4lyf

Harlow has this way of replacing the first consonant or two in some words with ‘fw’ – hence cream becomes fweam, promise becomes fwomise, Granma becomes Fwanma and so on. It’s obviously very cute and the day she stops doing it will be unimaginably sad, I am sure.

Yesterday we’re in the car after school waiting at the lights. There’s a big semi-trailer beside us.

Now in this situation, it was probably prudent to be the parent and hush the giggles coming from the back seat, but in my defence, I couldn’t hear any back seat giggles over my own guffawing.

Instead, I ask, “What’s it called again, Harlow?”

And then Ziggy says, “Say truck, Harlow!” Then Luca. I ask again. And we’re killing ourselves laughing until Harlow gets sick of our childish shit.

And in these moments when I am clearly a fourth child and definitely not the grown up, I tell myself it’s okay because I’m the fun mum and these are the moments we’ll all remember. Bren is far more disapproving, thinks I’m teaching the kids bad habits. But if we raise three kids who DON’T laugh when someone mispronounces a word in a way that makes it sound like fuck then I’m sorry, but I will have failed. God sakes, isn’t there enough seriousness in this fwucking world?

Maybe sometimes I go too far. Like the time Luca admonished me for air-drumming in the car. “Mum! You have to have at least one hand on the steering wheel! This isn’t safe!”

I told him to stop killing my vibe, man. I wanted to tell him how I used to roll a cigarette while driving stick shift back in the day. But I didn’t.

Because I’m the parent.