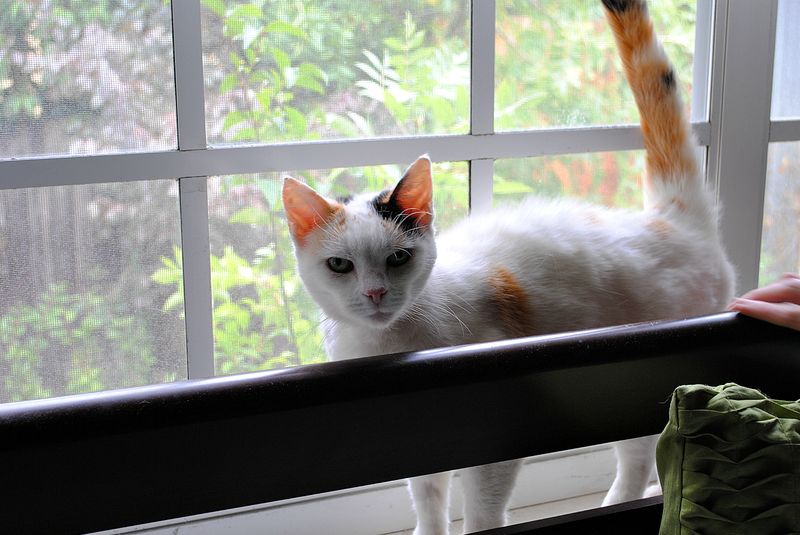 Last Sunday, I sat in my bedroom with this beautiful girl and I cried and cried. I patted her and she dribbled on me and I cried some more.

And then I put her in the carrier and drove her to a new home twenty minutes away.

LuLu has gone to live with another family, a family who will adore her and give her all the love and attention that she craves. And deserves.

LuLu deserves to be treated like the baby of the family, the way she was in this family before children came along.

Fourteen years ago, we adopted LuLu. She was about 5 months old and had been returned to the vet from which she was purchased because someone was allergic to her. She was the most beautiful snowy white kitten with an amazing tortoiseshell tail, and even through the bars of a cage, she was a total smooch. I'd had my heart set on a tiny kitten, but I had to save this little girl's life.

Her previous owners had given her the name Emerald but that wasn't right. And so she became LuLu. At the same time, we decided to adopt another rescue cat, this time a little ball of white and ginger fluff we called Zeb. They became inseparable.

I was around 25 at the time and those maternal longings were starting to surface so you can imagine how thoroughly spoilt these kitties were. Early on, LuLu developed a skin condition that made her scratch at her neck so viciously that it left a bald patch. The vet sent us home with instructions to shower her and apply a lotion each night. If you're wondering how in hell you shower a cat, I was wondering the very same thing. It was…..tense. She was still only little and reasonably easy to hold so the carnage was minimal, but it was a relief when the treatment was complete. Until then, I would wrap her up in a towel after her shower and cradle her on the couch like a little baby. She lay willingly in my arms, surrendering to the point of purring, and I found those moments spent sitting with her to be so touching. I was amazed that this little creature trusted me so completely. As a child, I tried to replicate a similar situation with my cat, Cleo, and I still have the fine, white scar above my lip to prove it.

But LuLu has never scratched or bitten. Zeb either. Is it because they spent their former years treated like mini-humans, kept inside and fawned over constantly? I don't know. But when people say cats are aloof and not affectionate and loyal like dogs, my goodness, they're wrong.

So LuLu had been a beloved pet. And then I had a baby. Suddenly, her fur was on my precious baby clothes and it made me insane. Where I had previously refused to let them go outside because it could be dangerous, now I was forever shooing them out the door. The once cherished fur babies didn't just become second fiddle, they became an inconvenience. By the time I had three kids, my days were so completely full with the demands of others that when a cat cried to be fed or to come in or out, I was irritated beyond reason. I don't have time for YOU, cat.

And so here it is. The cold, hard truth; I have been waiting for my cats to die.

I have carried that guilt for a number of years now. And all the while, my cats are healthy and sprightly and showing absolutely no signs of dying. After years of being brushed aside, they'd still curl around my legs and sleep on my bed, desperate to be close to me. And all I could do is be annoyed at the fur they left behind.

Added to this, LuLu and Zeb, once best friends, seemed to fall out. LuLu would hiss any time Zeb approached her.

So I reached out to a friend, a friend I knew was a cat person and whose kids loved cats, too. I wrote an email full of shame and guilt, offering my beautiful, 14-year-old cat to her family if they should want her and apologising for doing so because what kind of monster gives away a family pet? Yes, it makes finding rental properties more difficult when you have two cats and we are currently looking to move, but I can't use this as an excuse for doing what I did.

I told my friend, I said, "Mel, I think I know how my birth mother felt." And we laughed because really, it's a long bow to draw. But the similarities are there. The crushing guilt that comes with relinquishing a part of your family but a belief that they could have a better life than the one they'd have with you.

It's not a selfless act. No. I can't claim that. But it is not an entirely selfish one either. LuLu is the most affectionate cat and for half of her life, we treated her like she was our child. And then it just stopped and I can't imagine how confusing this must have been for her and Zeb. She deserves to be cuddled and patted and loved. She deserves so much better than our family.

Mel decided her family would take LuLu. I was so relieved, but then I found myself dragging my feet a little when it came time to organise a date to deliver her to her new home.

When it was time to say goodbye, I called the kids into the bedroom and they gave LuLu a little pat and then held up their hands to show me the fur. "I'm going to wash this off!" said Luca. And in that moment, I knew I had made the right decision. My kids are not attached to our pets because they never saw us demonstrate an attachment to them either.

So I put LuLu in her carrier and we drove for twenty minutes to her new home. I was greeted by two sweet and ecstatic faces who had been up since dawn waiting for the new arrival, and a family on the whole who seemed genuinely thrilled at the idea of welcoming our sweet LuLu into their family. My heart felt a little lighter knowing that she would be adored. I am so grateful to Mel for this.

And so it is that LuLu has a new family. I am still a mess of contradictory emotions and I'm kind of glad. I was worried I had become cold-hearted, but giving up LuLu reminded me of the time when I had loved her like a child. For fourteen years, she has been mine.

As for Zeb, he is suddenly an only child and appears to be taking it in his stride. And in some weird way, I have been more inclined to pat him and spend time with him now that he is the only pet I have to care for.

It's been a strange and emotional time. Pets are absolutely for life. Let my story be a warning to anyone who would get a pet on a whim. I am hopeful my decision has been the right one, but it was incredibly difficult to make.

So goodbye, my LuLu. You were the most loving pet. You drove me nuts. You were my very first baby. I will miss you. I'll see you soon.