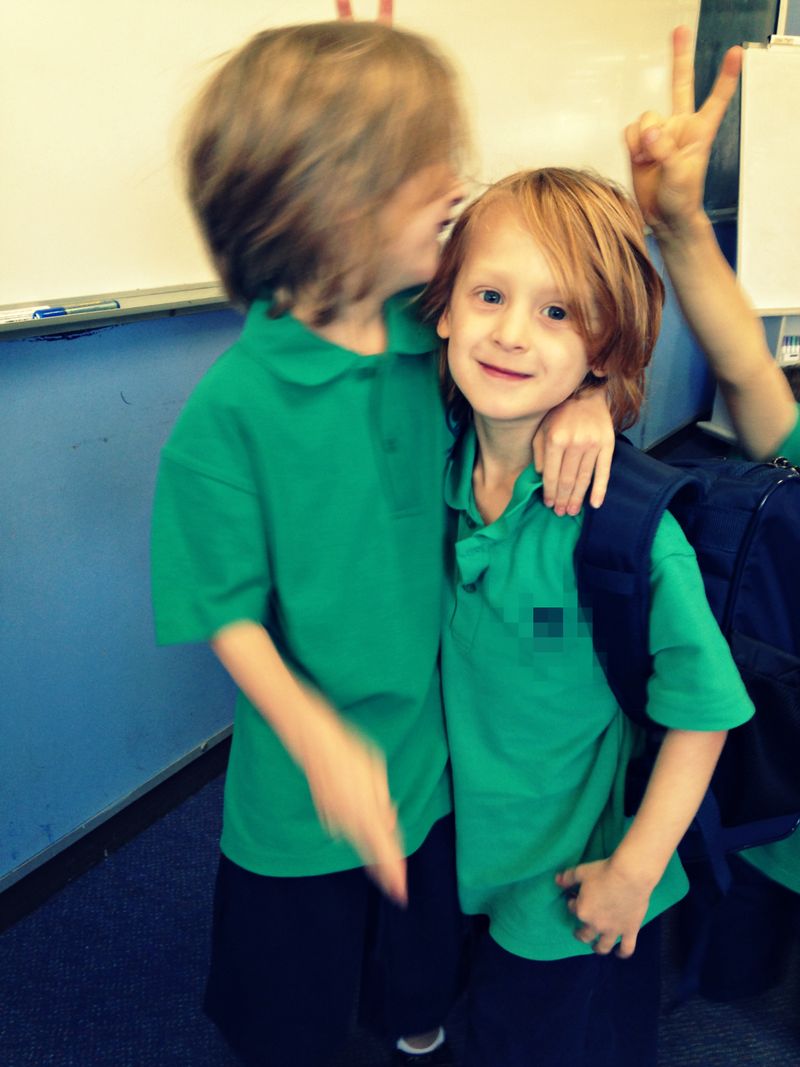 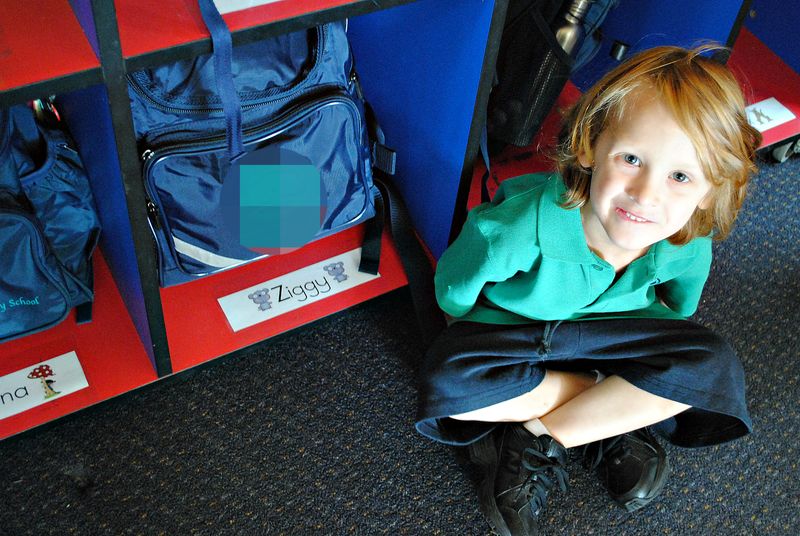 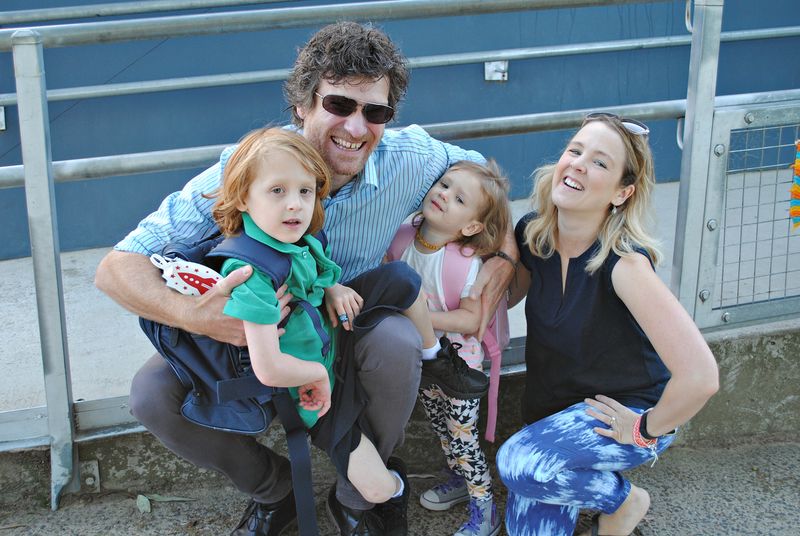 Oh, I know, I know, this is a (semi-professional) blog and not a personal scrapbook, but how could I not share photos of my kid on his first day of Prep?

Ziggy has begun school (the year before Grade 1, sometimes known as Kindergarten in other places – but not here in Victoria because we call 4-year-old preschool Kindergarten. Too confusing. Brain exploding.) and I am pleased to report he handled it like a pro.

It's very normal for kids to be apprehensive about starting their school careers, but Ziggy has been guns blazing ready. Having an older brother has always inspired him to want to piss with the big boys. Of course, he has moments of self-doubt and fear, normal human behaviour in the face of change, but wanting to keep up with Luca has been a big factor in helping Zig push past his fears. It's awesome in practise and kind of bittersweet in hindsight because he seemed little for such a short time.

So he approached his first day of school with genuine excitement. Without even a hint of tears, even hidden somewhere beneath the outward enthusiasm, my eyes stayed completely dry, too. Yes, it's a huge milestone, but Zig is truly joyful about school and so I am joyful for him. And crazed-lunatic proud.

And also, stupidly excited about only having one kid at home all day. Only one drop-off and pick-up time. Come on. You work hard at this parenting gig for five years, it's okay to admit that parting is NOT such sweet sorrow. Parting is good. For everyone involved.

And actually, Zig has Wednesdays off at the moment while they conduct individual testing and last Wednesday, he was BORED out of his brains. This kid wants to be at school but he also needs to be.

So Zig has enjoyed a smooth transition into school life, and I have been able to take it in my stride because I've been here before. Two years as a school mum has taught me a few things. I thought I might share a few tips. 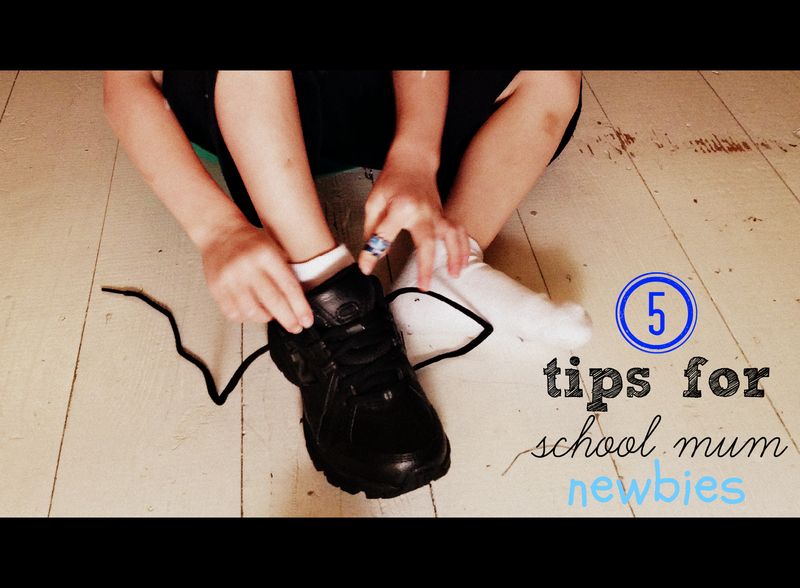 1. DON'T BOMBARD YOUR KID WITH QUESTIONS AFTER SCHOOL

"So how was school today? What did you do?" It's a natural question to want to ask when your little person is beginning their school adventure. I was DESPERATE for details when Luca started Prep. I was so excited for him and assumed he would be just as excited to share aspects of his day. I was bitterly disappointed when I was met with monosyllabic answers like, "Good" and "Can't remember." Seriously? I was shattered. What I didn't realise is that giving me a detailed answer was almost impossible for him to do.

Cognitively, our little people have just taken a hammering. Their brains are working overtime to keep up with the pace of a full day of school, learning new rules, routines and expectations – and then they have to learn actual academic stuff! It's a lot, and in those early days (and even months), they will need some quiet time to enable their brains to process everything they have learnt.

So now, on the car ride home, I'll ask a simple question like, "Did you have a good day?" which allows them to give a yes or no answer. If they want to elaborate, they can. But if not, I let it be.

Interestingly, Zig has been quite effusive in sharing the day's events with me. I think it's his personality. Luca, now in Grade 2, is still largely monosyllabic. I asked him how his first keyboard lesson went. He did respond but when I pressed for further details he exclaimed, "I can't remember, Mum! It was before lunch!" Which means he has his father's memory. Great.

2. DON'T BE AFRAID TO ASK THE TEACHER QUESTIONS

If your kid isn't telling you about their day, that's normal. But if you have concerns about how it's going, the teacher may be able to help fill in the gaps. If they're not aware of any issues, they can keep an eye out for you. Building up a relationship of open communication with my kids' teachers has been so important. Most teachers (if not all) will welcome you sharing concerns. They have 19+ other kids in that class and it's not humanly possible for them to be across every aspect of your child's day, but making them aware of a potential issue early gives them the best chance to help remedy it.

Luca's Prep teacher really helped allay fears I had in that first year. She was so patient with me and always put things in perspective. Seeing my child through her eyes gave me a greater understanding of him which was a beautiful gift.

When kids start school, it exhausts them. On every level, they're being challenged. So if they're a little tired and emotional at the end of the day, try to give them a pass.

When Luca started Prep, he was so exhausted at the end of the day that he would occasionally have epic meltdowns before bed. Even as a toddler, Luca was not prone to tantrums so this behaviour threw us. Apropos of seemingly nothing, he would fly into a tearful rage that he couldn't seem to control. I quickly worked out that arguing back was the very worst thing I could do, and so I would grab him and hold on tight until he calmed down. He needed support, not confrontation.

I spoke to his teacher about his behaviour at school. Was he emotional and combative in the classroom? Her answer was brilliant. She told me that no, his behaviour in the classroom was excellent and that maybe the effort of this was so great that by the time he got home, he could no longer hold it together. It made so much sense. As adults in the workplace, we toe the line all day long and then we come home and drink too much to blow off some steam. Without the benefit of alcohol, Luca is left to manage any way he can. Poor kid.

So if your kid comes home from school a little ratty, give them some space. And a snack. Hangry is a real thing. Small grievances that would normally roll off might really get under their skin – and we're all like that when we're tired. Home should be a safe place to land – we all display our most undesirable traits here after having to behave in public all day. So in this initial few months, cut your little mate a bit of slack because chances are, they're trying their best to adjust to massive change.

4. VOLUNTEER AS A PARENT HELPER

If you can block out a morning once a week/fortnight/month – hell, even once a term – to help out in the classroom for an hour or so, do it! It's an invaluable chance to see what goes on in class and to watch your child in action. Most times, you'll be helping with the readers and it's a great way to get to know the other kids in the class.

But a word of warning, do not go in to compare. There may be kids who read below your child's standard, and those who read well above it. Some kids will be naturally quiet and hard-working, others will be more prone to distraction. Every kid in that class is different and the only one who is any of your concern is your own. Be proud of who they are and applaud the progress they make, in their own time.

Comparison is the thief of joy. Don't forget that shit.

5. TALK TO OTHER PARENTS

I can now say that some of my dearest friends are people I met through school (and pre-school). At least 10 people on my wedding guest list are those I've met in the last four years. Dear friends, I tell you. People, without whom, this journey would have been much less fun. You don't have to volunteer for every school council or committee, but getting to know other parents does help create a community. I like communities.

Attitude is everything. If you go in expecting bitchy cliques, that will be your experience. But be open to meeting new people. You may not meet your soul sister, but having someone to chat to at school pick-up is nice. Give it a chance!

Entering the schooling years is a monumental moment in the life of a family. Keep calm and try to enjoy it!