How I Am Staying Sane During the School Holidays

I love school holidays because there is no pressing need to have everyone up and out of the house before 8:30am.

I loathe school holidays because nobody gets up and out of the house. They stay home. With me.

Mums who cherish extra time with their kids over the holidays? Not me.

It could be because my house is old and small, and being cooped up with three small humans with surprisingly big voices that demand things all day is my one-way ticket to hell. Or maybe my kids are more annoying than the average annoying kid. Or, and I suspect this is it, I'm just a shithouse mum who had lofty ideals about motherhood and now those ideals are the smouldering ruins of my dreams.

But hey, we're a week into the holidays and I have not gone completely insane. The answer has been getting out of the house. This is not a revelation, I know. But leaving the house is not always easy, particularly with three kids. Just organising water bottles for everyone can feel like a monumental task. Or maybe that's just me. Like I said, I do think I might be pretty shithouse at this job.

This past week, however, we had a bunch of pre-arranged activities AND we've made a few spontaneous outings and my mental health has been all the better for it. Taking three kids anywhere is still not necessarily something I would describe as fun but it has kept them busy and me less shouty which is a happy result for all.

Here's what we've been up to: 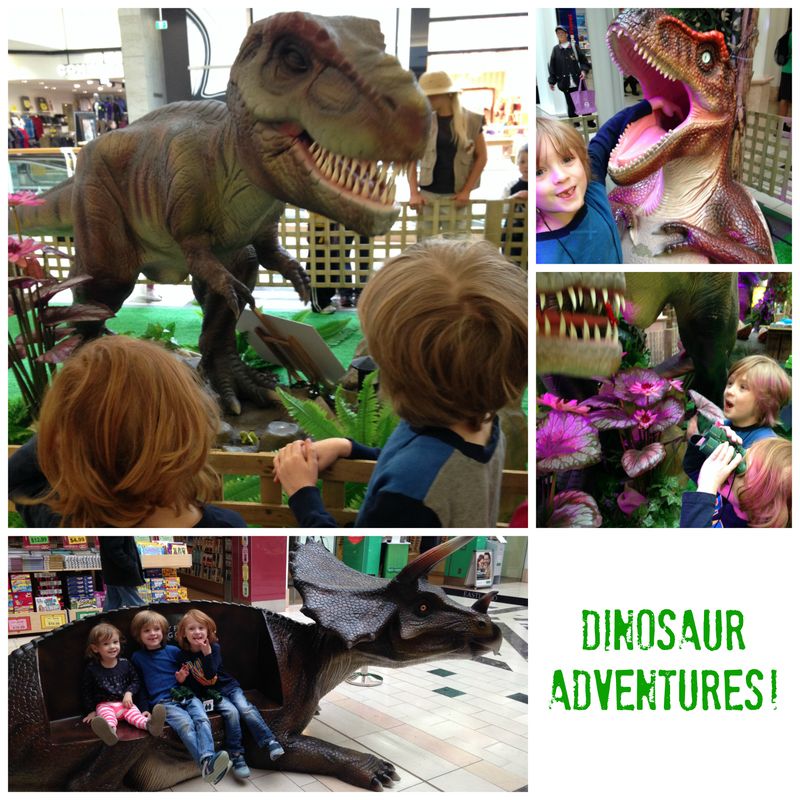 Last weekend we headed along to Eastland Shopping Centre in Ringwood (exactly nowhere near where we live but hey, who doesn't love driving in the car with kids?) to check out the Dinosaur Adventures Exhibition running until October 12. Featuring giant animatronic dinosaurs that move and roar, the boys loved it, but Harlow, who is going through a noise sensitivity phase, was having none of it. I think Bren was secretly thrilled because it meant he could use removing Harlow from the frightening dinosaurs as a ploy to go and get a coffee. Once upon a time I would have asked him to get me a can of Coke while he was at it but no. That's all over now.

There are dinosaurs scattered throughout the centre and we were led on a walk to discover them all and Luca in particular was right up the front listening to interesting facts about each one. After this, we returned to our meeting point where the kids could all don paleontologist gear and do a fossil dig. Sadly, it was at this point that I did a little dig of my own in Ziggy's hair and discovered a new fact: he had lice. I immediately cut our Dinosaur Adventure short, and the kids were very disappointed but they should have thought about that before they rolled around with hillbillies and caught nits.

Anyway, a big thumbs up for this free exhibition (note: fossil digging starts from $5 and souvenier photos are $12) – if you live on the east side and have dinosaur-mad kids, head along. Bren said the coffee was good. I can't comment on the Coke (saaaaad faaaaaace). 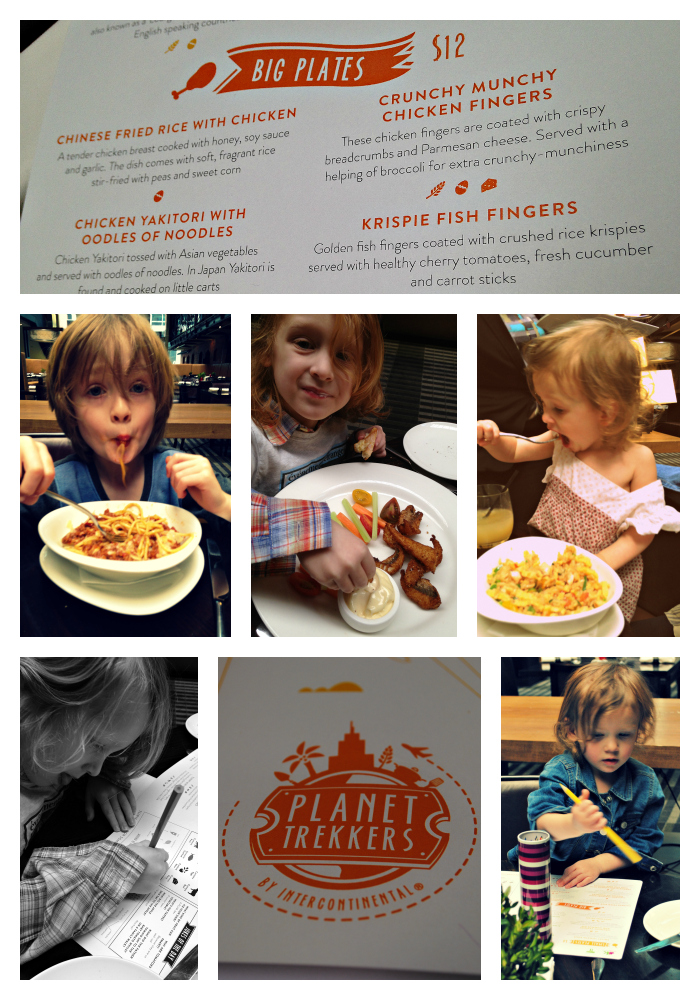 Going out to eat with kids is always a bit love/hate for me. I LOVE to eat. I HATE to be interrupted when I'm eating. Kids are one big interruption so you do the math.

When we were invited to try out the brand new kids' menu at InterContinental in the city, I thought, FOOD. YES. And then I thought KIDS. NO. But then I remembered that there are people who go out with their kids a lot and maybe practise makes perfect so away we went for lunch at Alluvial, one of the restaurants at InterContinental.

The new menu has been developed by award-winning chef Theo Randall in consultation with Annabel Karmel who is basically the guru of kid nutrition so I was expecting big things. But kids don't care about awards or nutrition so I was nervous going in.

The kids ordered Spaghetti Bolognese with Hide and Seek Vegies, Krispie Fish Fingers and Chinese Fried Rice with Chicken and I can't believe I'm really writing this but everyone loved their food. Luca said the spaghetti was so awesome that he wanted to come back and eat it every day. This was fabulous but also annoying because kids are supposed to love their mum's bolognese above all others and does loyalty mean nothing in this world any more?

Zig's fish fingers were made from actual fish and the crumbs weren't bright orange – he loved them. Harlow actually ate the chicken with her fried rice because it was chopped up and mixed through – I made a note to always, always do this at home. I knew about hiding veggies but I never thought about hiding chicken. Duh.

Bren and I actually ate our own meals in relative peace as the kids drew and did activities on their menus. Only towards the end of our meal, after at least an hour had passed, did we hand over the phone to keep them entertained.

This is a five star hotel so we expected the service to be good but it was impeccable. Nothing was an issue and even though our table looked like a disaster site pretty much from the moment we sat down at it, no-one looked on disapprovingly. That was nice – because kids are annoying and messy and not always welcome at restaurants like Alluvial. And the kids meals were 12 bucks each which I thought was amazing given the size and quality of the food.

I really enjoyed going somewhere that wasn't specifically 'for kids' but that was so family friendly. Bren even managed to wrangle himself a whiskey tasting so he left thinking it had been the best lunch of all time. And the building itself is so gorgeous that as soon as we walked in the doors, I said to Bren, "Let's come back here again but without the kids."

Heading into the city for lunch at a beautiful restaurant with the kids – I know it seems like a crazy idea but try it. It was so bloody civilised – and we all need a bit of that. 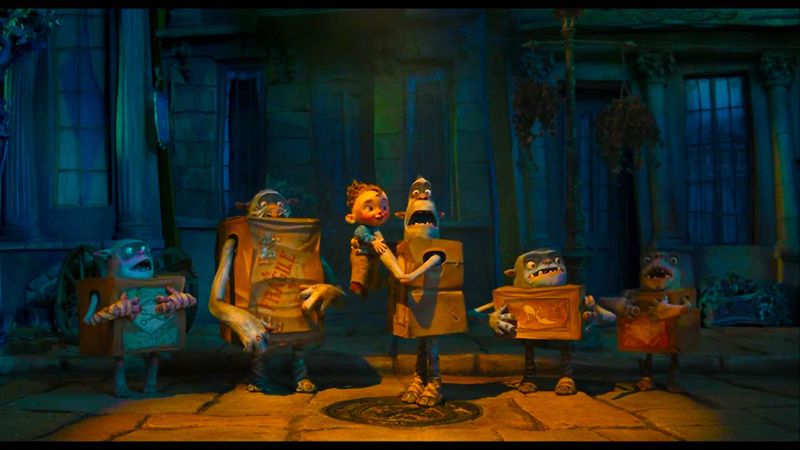 Now I actually love going to the movies with my kids, I really do. Even Harlow has been once (to The Lego Movie) and been great. But it's exxy, right? It sure is. However, on this occasion, the tickets were comped by a local real estate agency via my son's school. Lesson: always read the weekly school newsletter. Or be friends with someone who reads it and then tells you about the stuff you should know (thanks, Gin).

But there are other ways to secure cheaper tickets – for instance, my mobile company offers $10 tickets online or depending on how many kids you have and how often you go, you could buy a booklet of 1o tickets which works out cheaper. And smuggle in snacks. Yeah, yeah, I know you're not supposed to, but if cinemas don't want people to break the rules then they shouldn't charge $38 for a small bucket of popcorn. Amiright?

So The BoxTrolls. The boys loved it, but Harlow, what with her current noise sensitivity, screamed before anything even began playing on the screen. I spent the majority of the movie with my hands over her ears which made it really difficult to eat the popcorn – a blessing in disguise, my arse does believe. I missed a chunk of the movie dealing with Harlow but what I did see I thought was sort of dark and very British and if the boys had not liked it, I wouldn't have been surprised. Maybe it's a personal thing though because I am generally not a huge fan of stop-motion animation. Like I said, the boys were into it, a friend's 6-year-old girl found bits of it scary, and I thought much of the dialogue would be lost on small kids. If your kids enjoyed Wallace and Gromit or The Pirates! Band of Misfits, then they will probably get a kick out of The BoxTrolls, too.

The Park – it's shit but it's free 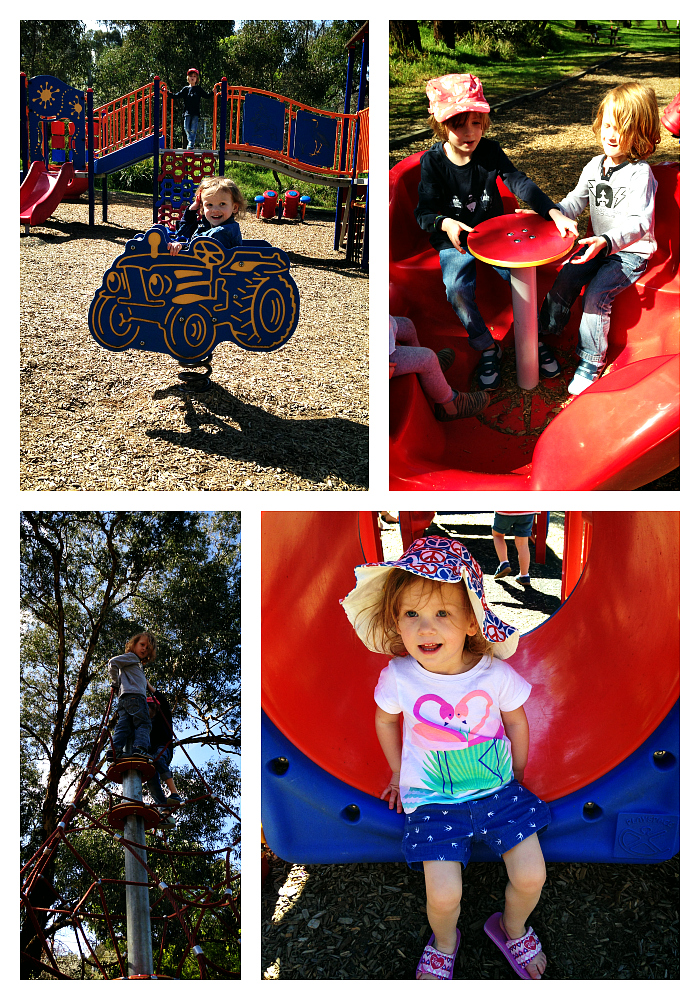 Kids love it. Parents hate it. I don't need to explain the park to you. But perhaps you'll appreciate my dos and don'ts.

So that's it. A week of stuff to do for kids – some budget-friendly, some not as much. If I could choose my perfect school holiday activity, it would be sitting at the swim-up bar of a tropical resort enjoying the suspiciously warm water around me while the smalls are occupied at a Kid's Club ALL DAY LONG. But sitting in tropical wee water drinking pina coladas is not in the budget right now so we make do. And we drink wine. I hope you're making do, too.