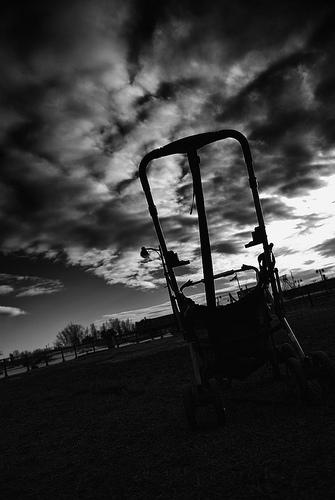 I can’t help but notice him as he boards the already crowded 112 tram in the city. Someone gives him a hand hoisting the pram up the stairs. They place it down just at the top, directly in the doorway. There is nowhere else for him to go. I stand in the opposite doorway. The tram is jam-packed.

He is dressed in Adidas trackies and a singlet, unremarkable in some ways but in another, hallmarks of a certain class stereotype. His body is wiry, his hair cropped right to his scalp. He is young, early twenties maybe. He has that hollow-cheeked, strung out look of a junkie. I guess speed. Some kind of amphetamine.

And he has a pram. With a baby in it.

I can not take my eyes off him.

From the moment he boards the tram, his body is in motion. He does not stop. He seems to be hunting for something. He looks in the baby bag that is slung over the handle of the pram, unzipping and rezipping the many pockets, digging around the bottom of the bag frantically. He moves to the basket beneath the pram, searching, searching.

What is he looking for? I suspect it is drugs. A little bag, a tiny piece of folded foil perhaps.

Finally, he straightens. He has found what he has been looking for.

The pram has a muslin cloth draped over the front, the way people do to shield baby from the sun. It is late afternoon, the sun has all but set but he is busy pinning the cloth so that it won’t slip off.

The tram stops to take on more passengers. The man shifts the pram each time to allow people past. I am watching him. Can’t stop watching him.

Who is he? What is his story? Is the baby his child?

The tram stops once again. He moves the pram slightly and a wheel falls off. Panicked, he grabs the baby out of the pram, lifts her up and holds her out. To me.

“Could you take her for a minute, please?” he asks, pushing the infant into my arms.

I take her. Of course I take her. I hold her, awkwardly. She regards me with suspicion and begins to wail. I jiggle her a little on my hip, like I have seen on TV. She doesn’t care for me or my jiggling.

The man fumbles with the wheel. People are offering to help. Watching him, I suspect he has some kind of learning disability. When he speaks, it confirms that he is perhaps a little slow.

Finally the wheel is fixed.

He takes the baby from me. Returns her to the pram. Messes around positioning and repinning the muslin cloth. As though his life depends on it, he works on that cloth.

I can’t take my eyes off him.

Who is he? What is his story? Why does he have a little baby?

As we travel further from the city, the crowds slowly disperse. The man lifts the baby from the pram and sits in a newly vacant seat. He is talking to her, making faces. Bringing her little face to his to give her a kiss. She giggles delightedly. Whoever this guy is, the baby clearly adores him.

He is not normal. Everything I am observing tells me his is part of an underclass. Under-educated, under-employed, conditions where abuse and drug addiction can run rife. And yet, here he is with this baby, perhaps only six months old, perhaps his daughter, and he appears to take the job of caring for her and loving her very seriously.

I don’t know this man’s story. I can’t help but worry about his future and the future of this baby. But he loves this little girl, this much is clear. For this reason alone, he is possibly a better parent than many better resourced people might be to their own children. But watching him is like watching a kid caring for an infant. Overly cautious, clumsy, affectionate, but without the necessary skills to respond appropriately in the case of an emergency.

It must be more than fifteen years ago now, but with sparkling clarity, I see him clambering down the tram steps and disappearing into the dusky light of a Fitzroy North street, taking that precious baby in the broken pram with him.