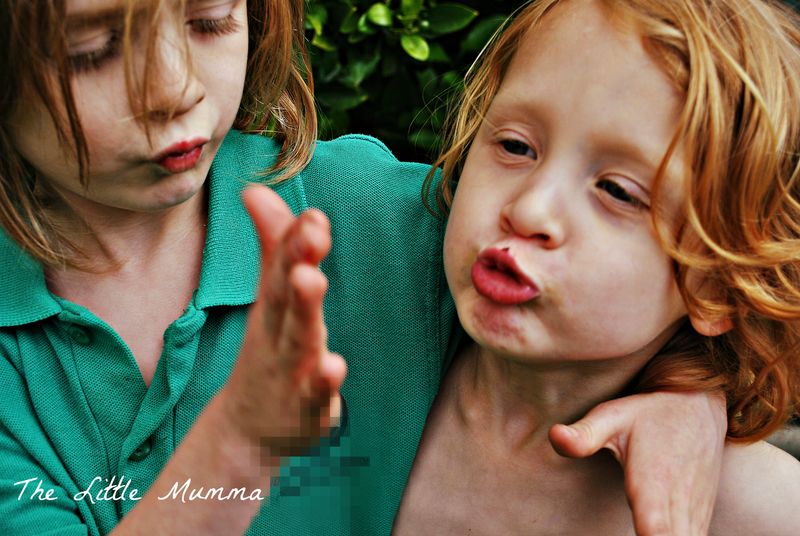 If you must know, I was tooling around on my phone when I should have been watching them. So from that perspective, it is probably my fault.

I’m the mother. No doubt future therapy will reveal it was all my fault.

But in my defence, I never could have predicted my children would almost shave their faces off in the bath.

We’ve established that I was tooling around on my phone. And the boys were in the bath. Bren was reading bedtime stories to Harlow.

I could hear the boys giggling. In hindsight, I guess you could describe the laughter as conspiratorial. The level of their mirth should have pricked up my ears. But Instagram.

So they’re laughing and giggling and splashing until the crying begins. There was no preceding crash or bump to indicate that something had gone awry. Except the crying. Zig’s crying is epic at the best of times, and as I approached the bathroom, I could tell he was hurt. I could tell that he was on the brink of a complete breakdown. And I knew that my reaction to whatever I was about to see was going to be the tipping point.

Lesson; my poker face SUCKS. I may have also uttered, “Oh, God!” but to be fair, my child was sitting in the bath with a mouth full of blood where you’d expect teeth to be. Zig seeing me seeing him was all it took to unleash full hysterics.

“What happened?” I asked but he was in no position to answer.

“What do you mean you don’t know? Did you bump into each other?”

“I don’t…yes, yes, I think we did,” was the reply and if the scene had been a couple of notches below utter chaos, I might have considered this response dubious. But there was no time for lie detecting because Ziggy was a couple of notches above utter hysteria.

In that tiny bathroom, bedlam. I was so confused I didn’t know where to begin. Bren arrived for back-up.

“Do you want to brush your teeth?” I asked helplessly but Ziggy recoiled in horror, a fresh round of wails echoing off the walls.

“Am I bleeding, too?” asked Luca, touching his lip worriedly.

“No, Luca, you’re fine. You’re not bl… Hang on, yes, you are!” I stared with disbelief at the tiny circle of blood forming on his top lip.

“Urrrggghhhhh, urrrgggghhhh. I. Don’t. Like. It!” Ziggy continued as Bren hauled his soaking body from the bath.

“Calm down, Luca!” I instructed. “Yours isn’t that bad. It’s just a tiny bit of blood. Now why don’t you brush your teeth?”

“Noooooo! Noooooo!” he cried and I fished him out and wrapped a towel around him.

Eventually, we managed to get them both into their pyjamas and after much reassurance that I would be gentle, I wiped away most of the blood from around Zig’s mouth but it was still impossible to tell where the bleeding was coming from. His teeth were streaked red but it was a relief to know they were still there.

Calm was mostly restored, Bren went back to putting Harlow down and we read our stories.

When it was time for lights out, I lay next to Zig. It was quiet. Just the sound of breathing.

And then a little voice came tentatively from the darkness,

“Well….ohhh….I think I have to tell you something.”

“I think I have to tell you the truth about what happened.”

I wracked my brain. “What white thing?”

“You know that white thing? I don’t know how to describe it but it came down into the bath and we were playing with it and I think that’s how we got hurt.”

“Oh, hang on. I know the white thing you’re thinking of. That’s a thing I use to get rough skin off your feet. Did you rub that on your lip?”

“That thing is sharp, guys! It’s like using a grater on your skin!”

“But we didn’t know!” Ziggy interjected.

“I know. You’re not in trouble, honey. I just can’t believe it – that must have really hurt!”

“Yeah, well, at first I didn’t think it hurt but then after it did, “Luca said.

“Okay, well, this is why I ask you not to play with things that don’t belong to you, okay?”

“But what is that thing called,” Luca asked.

We lay there in silence for a while.

And then I began to laugh hysterically.

Luca and I laughed hysterically for a while but only one of us understood why what I had said was funny.

And then I stopped laughing abruptly and gave the boys a stranger danger chat.

“Now if someone asks you to take your pants off, what would you say?” I began.

Clearly, I was traumatised and over-tired. But clearly, it was a conversation we needed to have because Ziggy confidently replied, “Yes!”

When they were finally asleep, I went into the bathroom to find the offending foot file but it was nowhere to be found. Then I spied my razor that was sort of white but mostly green and I wondered. Could they have been playing with my razor?

In the morning, I showed Luca the razor.

“Was this the thing you played with last night?”

And I prepared breakfast for two boys with very premature shaving nicks on their top lips and gave thanks they hadn’t performed an accidental self-circumcision.

And thank you to everyone who entered the Glasshouse Pamper Pack giveaway. The lucky random winner is

bubble936 said…
Because it relieves my kids from pain and discomfort & gives me mental peace that i am doing the right thing.

Please email me thelittlemumma[at]gmail[dot]com with your postal details. Thank you!