This morning I woke feeling as though I was hung over. Even before my eyes opened, the stiffness in my neck told me I was not in my own bed. Squinting through bleary eyes, I saw her, sleeping like a perfect angel on her Daddy's chest, him still in an almost upright position to accommodate her little body.

At just after 2:30 this morning, she woke crying. My go-to soothing methods (boob, boob and more boob) only served to escalate the crying. I cuddled and I patted. She was having none of it. So then I got up, took her into the lounge room and turned on the television. Pre-recorded Peppa Pig episodes for the win.

But the winning only lasted about forty-five minutes after which she resumed the crying. I called in reinforcements. Bren did some pacing and patting. It worked until it stopped working. Administering Panadol was akin to branding her with a hot iron. At 3:30am, she threw herself into my arms in defeat and then she threw up. We braced ourselves for the onslaught but it never came. All it took was one little mucousy vom. Finally, she accepted a breastfeed and promptly passed out. Until I had the bright idea of moving her into bed with me at which point she woke and began to cry in earnest again.

And that is how we found ourselves waking on the couch this morning, exhausted and sore while the baby slumbered as though on a bed of clouds.

It was a rough night.

But I knew that in a house not far from mine, a mother was opening her eyes to the kind of day no mother ever should. When Sally woke this morning, I wonder if the feeling was an immediate and solid weight in her belly, across her chest. I wonder if she wanted to pull the covers all the way up and over her eyes so that the brightness of dawn could not reach her.

Today is the day that Hope was born. Five years ago, Sally's firstborn daughter came into this world, perfect, beautiful, but with no breath in her tiny lungs to utter that cherished first cry. 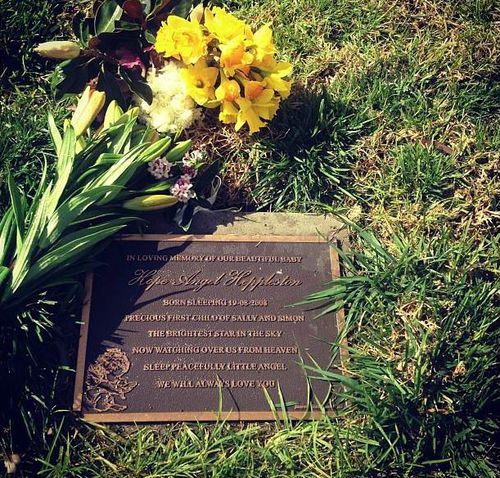 Today I remember Hope Angel Heppleston. And I think of Sally and Simon and the daughter they should be celebrating.

Even as I type this, Harlow has begun to cry again. Tonight may yet be as rough as the last. But she is here. My daughter is here, crying and screaming and possibly vomiting, and I know, I know, my friend would give anything for the chance to be sleepless with her eldest daughter tonight.

Please check out Fairy Tales for Hope, the beautiful illustrated prints by Tonia Composto created in memory of Hope. Every print sold raises funds for Stillbirth Foundation Australia. I have Beauty and the Beast framed in Harlow's nursery.