Yoga AND Xanax: a fine balance 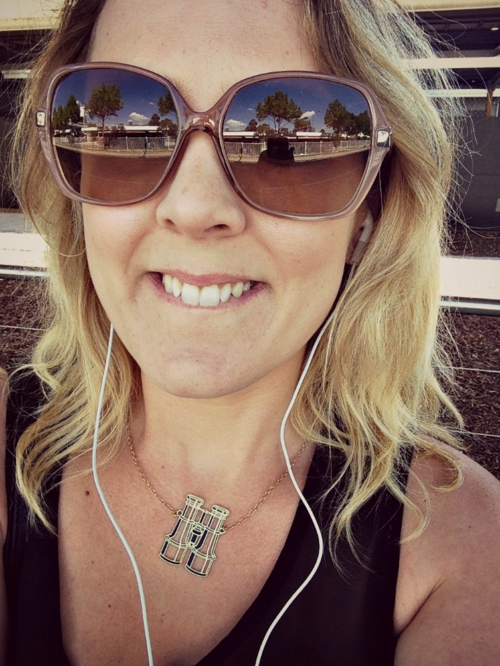 If you follow me on social media, you’ll know I just returned from a solo overnight trip to Sydney. Via a complex spider’s web of reasons that are far too convoluted to explain here, hotel rooms and in particular, hotel rooms in Sydney, are a huge panic trigger for me. When I was invited to a blogging event in Sydney with the offer to fly me there and put me up for the night, I was a mess of conflicting emotions. On the one hand, what an amazing opportunity, I can’t wait to go, and on the other, I definitely can’t go because what if I have a panic attack?

And that’s the insidious nature of anxiety. Fearing a panic attack is often the catalyst for having another. Example: very unexpectedly, I had a panic attack at my first child, Luca’s baptism. I then went on to have a panic attack at the baptisms of both Ziggy and Harlow. Literally years after Luca’s baptism, the fear of having another panic attack was still potent. Yes, there were similar triggers each time – my desire for everything to go perfectly meant I was already in an anxious state, but the tipping point was the precedent that had been set all those years before.

The last time, Harlow’s baptism in early 2013, I was lucky enough to have invited a chiropractor friend who treated me as a lay face down on my bed while guests milled about in my back yard waiting for the ceremony to begin. Whatever she did, it worked and I went on to have the most amazing day. I was so grateful.

But chiropractors do not fit comfortably in handbags and so that is why I took along a little packet of Xanax with me to Sydney.

The truth is I’m a bit of a lightweight when it comes to drugs – legally prescribed or otherwise. Past experience has indicated time and time again that my tolerance levels are low for most substances. So I was deathly afraid of Xanax for the longest time and even more reticent to ask my GP about it given its addictive nature. I have no desire to take Xanax but its power to shut down a panic attack made it impossible for me to ignore the difference it may be able to make in my life. So my GP prescribed me a blister pack of 10 tiny pills and after 14 months, only 4 are gone.

I am so afraid of using them. They are always a last resort. I don’t like how they make me feel afterwards but I can’t deny that they work quickly when nothing else is. The last time I took one, I let myself pace my lounge room for FIVE HOURS before I finally conceded that the breathing exercises and meditation apps were not working. With typical caution, I took half a pill but after 40 minutes had passed and I was still pacing, I rang Nurse On Call who advised me to take the other half. I was asleep within ten minutes.

The caution I exercise in taking medications is not a bad thing. I think it makes sense to ask questions and read up on stuff, but when I think about those five hours spent wearing figure eight grooves into the floorboards of my lounge room, I wonder whether my caution caused me to suffer for longer than was necessary. I tried the breathing exercises, I downloaded three apps searching for a comforting voice to talk me through a meditation and while those things did work temporarily, my panic was so intense that it kept resurfacing, from midnight until 5am. I have a busy life with three small children to care for and I NEED to sleep. In hindsight, I realise that when the panic began and identifying that it was most likely going to escalate given the circumstances (late at night, had consumed wine earlier in the evening), the best plan would have been to take the Xanax, shut the panic down and get some sleep.

Managing anxiety is a delicate balance. Taking Xanax at the first hint of anxiety would not be wise for me – or necessary. Flying to Sydney and attending the event, I was able to use breathing techniques to refocus myself and stay calm, but I knew that later that night, alone in my hotel room, if panic kicked in, the odds would be stacked against me and taking a Xanax right away would be sensible. As it turned out, the panic never came. Having the Xanax there in case of an emergency and giving myself permission to take it in the event of that emergency acted as a kind of buffer to the panic. Carrying this medication on me has an almost placebo effect. It becomes an insurance policy against the worst case scenario. In a way, this little blister pack of medication has the potential to expand the possibilities of my life without me ever having to break through the foil. I am grateful for that.

I am also grateful for yoga. It centres me and challenges me. It increases my awareness, within and without. It makes me feel better. I am grateful for my osteopath who cradles my head in her hands and though her movements are sometimes imperceptible, I know she is working some kind of magic on my skull. And I am grateful for my anti-depressants.

In the beginning, people would ask me, “Oh, you’re taking Zoloft? When do you think you’ll get off them?” And I wondered, do they ask the epileptic this same question? What about the guy with the heart transplant? What’s he doing to get off those anti-rejection drugs? Has the Type 1 diabetic thought about yoga instead of insulin?

Fresh air and long walks, wholesome foods and yoga, less stimulants and more antioxidants. Getting back to ALL THINGS NATURAL. I get it. And I strive for it. But in the process of highlighting the benefits of living more naturally and seeking alternative therapies where applicable, does western medicine have to become the devil? Relying 100% upon pharmaceuticals to treat our every ailment is folly. But swinging 100% back the other way makes little sense either.

Around the time Luca turned one, he had a cold which seemed to hang around. He’d make a slight recovery before being struck down again. I assumed it was just a common cold and wanting only the best for my baby, I avoided taking him to the GP for antibiotics. Finally, after more than a month of ill health, I took Luca to the doctor who prescribed a strong antibiotic. Within a week, Luca was well again. And it was only once he had fully recovered that I realised just how sick he had been. It was as though his little personality came back and I had not noticed how dulled it had been. In my quest to protect his little body from a potential toxin, I let him suffer for weeks and weeks.

We’re so worried about being swindled by modern medicine and yet we all rush out to stock up on coconut oil after reading one article we found on Facebook. Our logic is, I fear, a little wacky. Our quest for healthier living is leaving some of us vulnerable and suffering needlessly.

I'm concerned about the young man I know who has his whole life ahead of him but whose crippling anxiety is making him a prisoner in his own home. Who would deny him the option of pharmaceuticals if they could help him break free from agoraphobia? Are there well-meaning people telling him in their round-about way that he just needs to toughen up?

I am concerned for my fellow mums who are suffering from post-natal depression and other mental illnesses, trying valiantly to survive on kale and fresh air alone. Sometimes that is not enough. And if that is true for you, then I am telling you it’s okay to find a GP or counsellor you trust to talk through your options. ALL of them. Even the ones that come in a blister pack.

I do yoga AND I take pharmaceuticals daily. I eat kale salads AND deep fried potato. I enjoy both. I can’t drink coconut water though. I tried. It tastes like ass. But I am finding my own balance. At this point in time, prescription drugs are part of that balance. They may well be forever. And if not for society's thinly veiled contempt for this dependence, I could probably take them without any residual guilt. I could hush that nagging voice that says if only I ate more quinoa and snapped out of it, I could quit these terrible drugs for good.  I could simply take my pill once a day and be grateful for the way it helps me live my life without debilitating sadness. And then I'd go do some downward dogs and eat a superfood. For good balance.