On The Road: tips for travelling with kids

Christmas 2013. We were driving from Melbourne to Sydney. 10+ hours in the vehicle. With three children.

How hard could it be?

Well, we assumed it would be quite hard and so we took what we thought were excellent precautionary measures. We planned ahead and felt confident this preparation would save us a world of hurt. 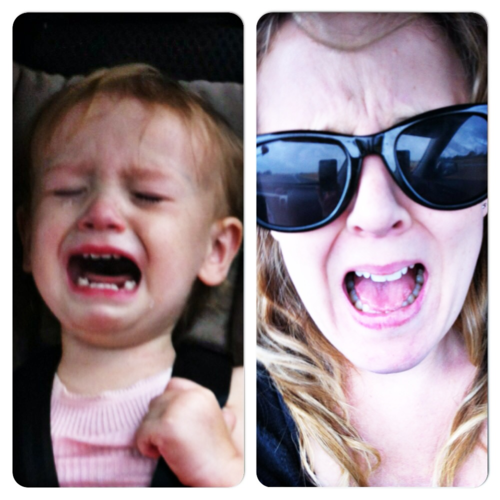 This was only 2 hours into the trip.

Turns out we had a lot to learn.

Europcar Australia recently conducted a survey about the best ways to keep kids entertained on long car trips, and they asked Aussie bloggers to participate. In fact, they asked me, but I was still too traumatised from Christmas to be able to give a reasoned response.

Here are the results of the survey, all collated in one easy to read infographic. Oh, the genius of this modern age!

So some fairly obvious ideas (give them a screen and some food) and also some excellent reminders – chill the eff out, parentals, they’re kids and you have to expect that they’re going to be antsy on long trips. That’s just the way it goes, baby.

Having walked through the fire, I feel qualified to share a few of my own tips. Please enjoy.

DON’T BRING THEM. Yes, I know, this isn’t actually helpful, and I don’t want to be negative, but I just feel on some level, kids ruin everything. But if you’re absolutely stuck hauling them around the country then consider that…

2.    Leaving Under Cover of Darkness is Not Necessarily the Answer

I know what you’re thinking because I thought it, too. Hit the road at 4am so the kids will sleep for at least the first three hours of the trip. No. This does not work. Even for the baby. Because waking small children in the middle of the night to go on holidays feels like one thing to them; ADVENTURE. And kids who anticipate adventure behave like they’ve been mainlining red cordial – which means you’re basically strapping a speeding kid into a very confined space and expecting them to just sit there. And like any intense high, there must follow an intense coming down and this will occur roughly 25 minutes into the 10 hour trip when they realise that no, we aren’t there yet and won’t be any time soon. And I need to pee.

Of course, there are still benefits to leaving early – traffic being the main one – but I’d just hate you to be all delusional about what a genius idea you’ve had only to be shattered in less than half an hour. And also, don’t pack the night before. Pack much, much earlier and then get yourself to bed. At 8pm. Seriously. I packed until midnight, got up at 3am, kids flipped out after only a 20th of the trip had transpired, and I was so utterly decimated by sleep deprivation that I ended up not sharing the driving at all because I was concerned I might steer us right off the edge of the Hume Highway. So basically into a paddock. 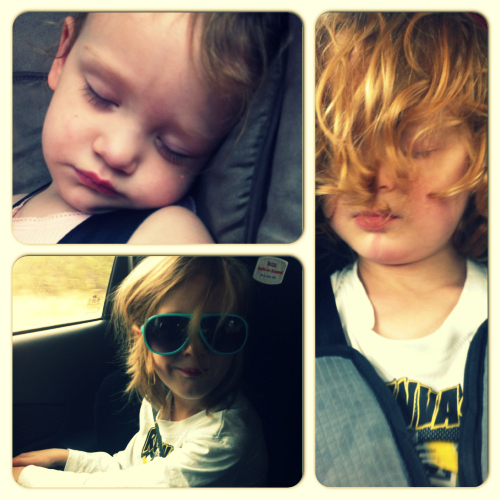 Possibly my most favourite part of the whole ten hours

3.    Get Your Kids Really Hooked on TV BEFORE You Go

When we roadtripped in December, Harlow was about 18 months old and largely disinterested in watching TV. Prior to the trip, I quietly wore this as a badge of parenting excellence – despite the fact that I actively put her in front of the television each day in a bid to escape her dimple-fisted clutches. For whatever reason, she was not interested. Good for her.

But when she began to cry so early on in the trip, I turned desperately to the screen as a possible antidote to her despair. Not only was she not interested in the portable screen set up for her personal use, but she seemed aggrieved that we were subjecting her to this lively entertainment in the first place.

The boys watched pretty much all the DVDs they brought along and were happy to do so and when they weren’t doing that, they listened to music or played games on various devices. Aged 4 and 6 and deeply in love with tech in all its forms, Luca and Zig were not particularly problematic. The baby was punishing. I fully expected her to sleep for 70% of the trip and she just didn’t. I then thought she might stare aimlessly out the window but she was not satisfied doing that either. She hated the TV being on. We were stuck. She cried constantly, her arms outstretched for me. It was awful. My instinct was to have her in the front with me, but if Britney Spears taught me anything, it’s that children must not sit on your lap when you’re driving. Sigh. So many rules. So the only real solution to the endlessly crying baby is…

Yes, every two hours seems like a solid plan. However, it really depends on how bad things are in the car. Bren cannot bear to hear Harlow cry and so he was itching to stop every time she did but had we done that, we’d probably just be getting into Sydney now. At times, we just had to let her go. I put my neck out turning backwards to try and hold her hand and let her know I wasn’t ignoring her. It was not fun.

In addition to being prepared to stop often, it’s a good idea to think about the quality of the stop. So if you can find a park with play equipment, there’s nothing like a swing and a spot of fort climbing to expel some of that cooped up energy. In short, don’t hurry them out of the car to pee and then hurry them back in again. Yes, you want to make good time – I know. But kids don’t give a shit and they can make your life HELL if you don’t give them a bit of a breather from the monotony of the open road.

5.    Make Sure All Devices are Fully Charged and you have Back-up Power

When I was thirteen, my family went on a trip to the US. The first thing I did when I sat down in my plane seat is rewind a cassette on my Walkman (yes, a cassette). While waiting for the tape to rewind, I took out a book to read and promptly forgot about listening to music.

Now those of you who are familiar with the old Walkman might recall that some models required the user to press stop when the tape had finished rewinding otherwise the unit would remain in a suspended state of attempted rewind and thereby, drain your batteries very quickly. I rendered the (only) batteries completely dead as our plane flew somewhere over the oceans between Melbourne and Los Angeles. It was a bummer not least of all because in my carry on luggage I had packed 15 cassettes that I was DEFINITELY going to listen to during the trip.

My point is simple; if you bring devices, make sure you can power them for the duration. The only thing worse than providing no in-car entertainment for the children is providing it unusable. 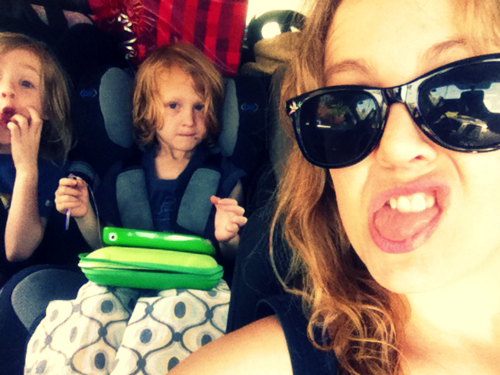 I call this one "Look at all the fun we're having!"

And finally, a bonus tip, just remember to breathe. Right down into your belly; really get that oxygen into you. Snack your faces off, have at least one family sing-a-long, and in the midst of the exhaustion and chaos, try, try, try to have some fun. Some day they'll grow up and be too busy to even call you on Christmas Day. Kids!