How My Home Has Changed Since Having Kids: a tale of Pokemon cards and despair 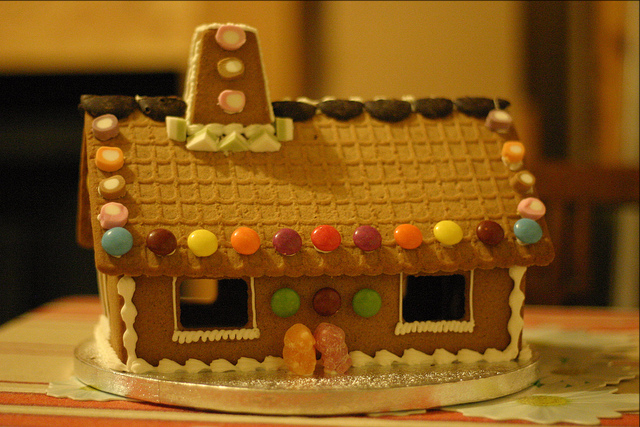 I have never been a huge fan of cleaning. In fact, is anyone? I can’t imagine a person declaring, “I am a huge fan of cleaning!” That would just be so odd. But as I walk around my present-day home, I cast my mind back to a time when I lived in a house with just one other person and I think about how times have changed. Though I concede that the house of yesteryear was never showroom immaculate, it had a general orderliness about it. Storage space may have been lacking but most things had a natural home. Spending a Saturday morning cleaning did leave me with a warm afterglow of satisfaction. I recall being disappointed at how quickly the shower grout needed to be cleaned again but mostly, the rewards of cleaning could be felt for days, if not entire weeks.

And then we had children.

But it’s so much more than the accumulation of things. Room by room, cupboard by cupboard, the children have infiltrated our space in ways we could never have imagined. Allow me to meander through my home and list them. 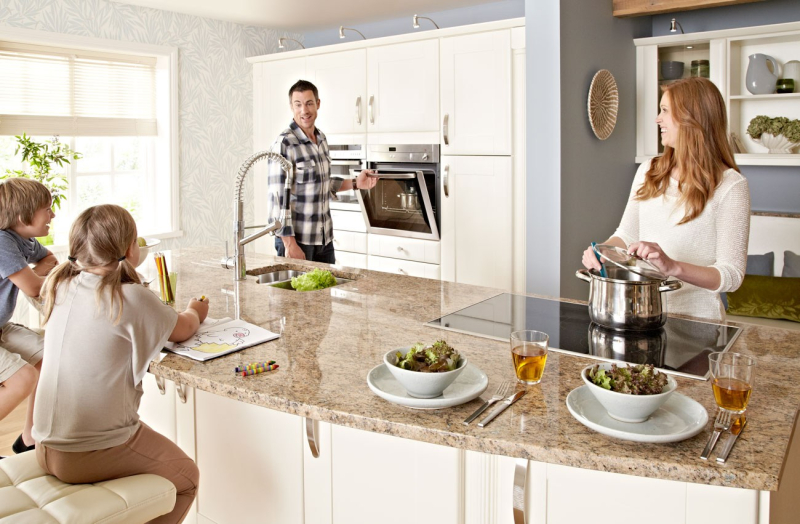 This photo is deeply unrealistic and not just because the parents are sitting down to a bowl of Mesclun leaves and a glass of their own urine.

Still the home of pots and pans and sharp utensils but now also featuring a fridge door plastered with school awards and birthday party invitations – and on top of the fridge, a collection of dust-covered toys that have been confiscated by Daddy at some point and then promptly forgotten about. I take no responsibility for this clutter because a/ I didn’t put those toys there and b/ I’m not tall enough to notice them once they’re there.

HOT TIP: Don’t pull out the fridge unless you want to find every small, rolling toy in the house with a beautiful coat of dust bunny fur. And 3 manky grapes. Proceed with caution. 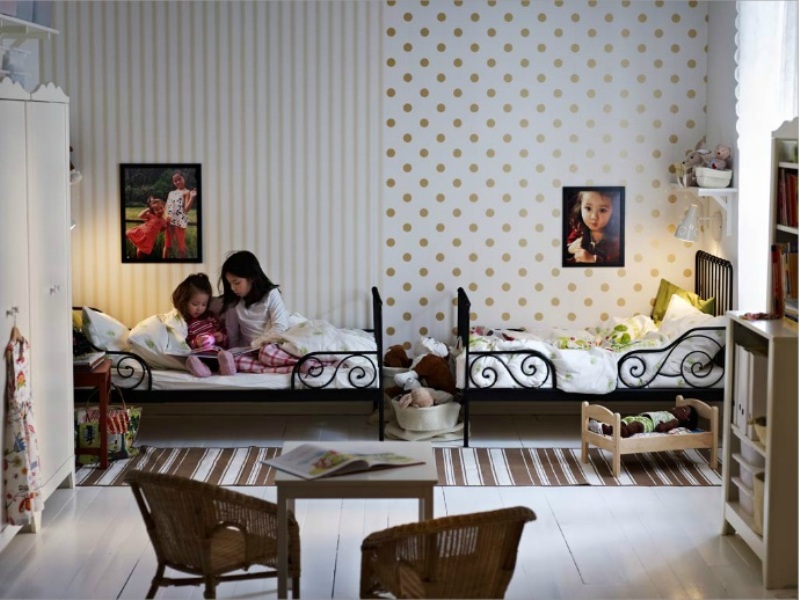 All children are hoarders. Everything has significance and deep meaning to them. NO, you can’t throw out those rocks from the garden. They’re very special garden rocks! NO, you can’t throw out that string that was meant to be inside the waistband of a pair of shorts but isn’t anymore because the temptation to pull it out was just too strong. That’s my most favourite shorts string ever! NO, you can’t give away that toy I haven’t played with in five years. I am totally going to play with that toy all the time now! Starting tomorrow.

Other notable inclusions: a Pokémon display folder full of Pokémon cards PLUS 3000 more Pokémon cards that don’t fit in the folder and also, are not the best cards but NO, you can’t give them to Goodwill, what are you, insane???

HOT TIP: Girls are messier than boys. There may be exceptions to the rule but in this house, a room shared by 2 primary school-aged boys manages to stay tidier than a room with 1 kindergarten-aged girl. The multiple wardrobe changes mean the floorboards are never visible. Also, doll accessories are the actual worst. 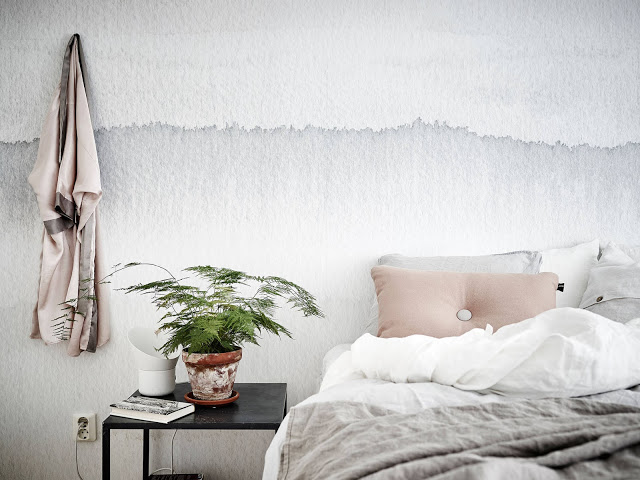 I love the minimalist approach to this bedroom – the minimal (zero) children is especially excellent. But where's the chair for the 'not clean, not dirty' clothes?

There’s a stack of books on the bedside table that you’re 100% too exhausted to read each evening. A ratty old t-shirt that feels like a second skin and kind of smells like one, too. One child’s hairbrush, a basket of clean washing that’s been there for 2 weeks and a wardrobe full of hidden birthday presents that you won’t be able to find the night before said birthday. A dinosaur toy that you’ve never seen before, at least one Pokémon card, the school permission slip you were looking everywhere for two weeks ago, and one single, solitary piece of Lego that you’ll find with the bottom of your foot as you stumble to the bathroom at midnight. This is how your children will learn to swear, absorbing your nocturnal cursing in their sleep. It’s not your fault.

HOT TIP: When you hide in your bedroom to eat a chocolate bar, don’t stuff the wrapper under your pillow. The next morning when you’re making your bed, the wrapper will come fluttering out and someone will judge you – probably yourself. 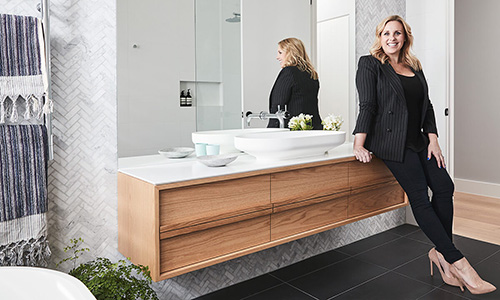 Hello! I'm happy bathroom lady. I have no children and if the shit Angie says is true, I never want any!

Once upon a time, we had two neatly folded bath towels and one hand towel sitting prettily on the rail. Now there are four towels on the rail, several more thrown over doors and very possibly a couple on the floor. The hand towel is still there but it is smeared with white toothpaste. There is also toothpaste in the sink, toothpaste on the floor and inexplicably, toothpaste on the ceiling. My eldest child is nine and let’s face it, runty for his age so how, I say, HOW did this happen? You’ll drive yourself mad trying to work it out.

Other notable inclusions: 8 toothbrushes and 3 open toothpaste tubes for a family of five. And Pokémon cards.

HOT TIP: Buy shares in handwash. You won’t believe how quickly you’ll go through the stuff. But also give thanks that someone is washing their hands. 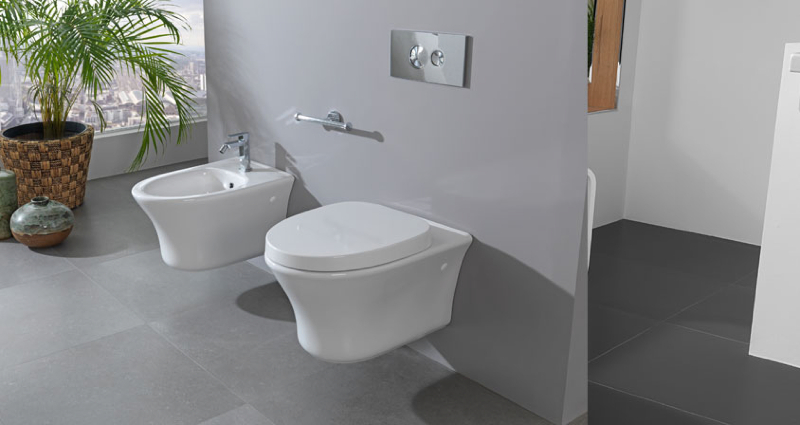 I was going to put a picture of the Trainspotting toilet here but instead, I prefer to gaze lovingly at this hovering dunny and its little bum basin twin.

You know how toothpaste gets everywhere in the bathroom and you can’t understand it? Well, the toilet….actually, I’m going to leave you to fill in the blanks. Things can get crazy in toilets with small children. My kids are now 9, 7 and 5 so things are mostly okay in there these days but there are times I’ve felt I was staring into the face of hell. I don’t miss it.

HOT TIP: Get yourself an ensuite. Seriously. 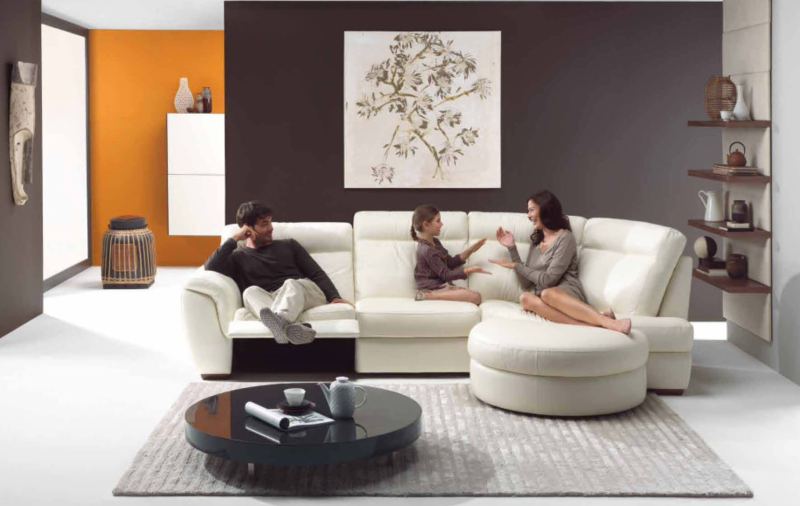 It's uncanny how much this picture doesn't represent my real life in any way, shape or form

That couch you bought as newlyweds is still here but you’re definitely rethinking that cream suede now, aren’t you? And all those throw cushions, you’re rethinking those, too – and not because the chevron moment seems to have passed but because children take the name “throw cushion” very literally and you find yourself placing 35 cushions back on the couch multiple times a day. And though your children will swear to you that they already looked there, everything that is lost WILL be found under the couch. Or the fridge. And just like the fridge, you’ll find things you will never be able to unsee like a hairy, half-eaten apple. You’re beautiful flat screen TV is also still here but it’s covered in smeary fingerprints. Doesn’t matter though – you never watch it anymore because the channel is always set to a kid’s show. Instead, you hide in your bedroom watching Netflix on your phone like any self-respecting adult would.

Other notable inclusions: every pair of shoes your daughter owns (and most of her hairbands), discarded cups of water, 73 DVDs that have not been placed back in their covers, a tennis racquet, 2 lightsabres PLUS a toast crust that’s been stuffed in the cutlery drawer of your gorgeous mid-century buffet. Oh, and Pokémon cards. Always Pokémon cards.

HOT TIP: This is no longer your space. The animals are officially running the zoo. The sooner you let go, the better. Get yourself a parent retreat. If this is a pantry, so be it – take your phone and a bottle of wine in with you and you have everything you need.