I started the year with two words I hoped would guide me: FOCUS and CONSISTENCY. It is now the 15th of February and the only thing I have consistently focused on is hiding from the children….so I can watch Gossip Girl eps…. and eat salt and vinegar chips.

If most people approach the new year by leaping straight into achieving goals and dreams, then I’m still back in 2016, kickin’ it old school. But the thing about New Year’s Resolutions is that nothing really changes except the date. And a brand new year, as much as it might psychologically represent a clean slate, is really just the same shit when you’ve got kids and bills and ALL THE STUFF. Also, we bring ourselves into the new year with all the same bad habits in tow. So much more needs to change than the last two digits of the year. 2017 Angie is just like 2016 Angie. And though I think both Angies are rad in their own special way, neither of them is very focused right now. Opening up a fresh new calendar did not help so I suppose it’s up to me to dig a little deeper. 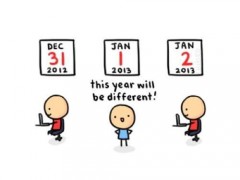 Why have I failed to launch thus far? Well, having three small children in tow for the entire month of January was probably part of it. I should also admit to the number of champagnes I drank over that period – they definitely hampered my FOCUS but I feel I drank them with CONSISTENCY.

Also, I don’t really know what I’m doing with my life anymore. I’m trying to focus on freelance writing but I could be submitting more. I want to blog more and though I have 1000 things I want to tell you, I haven’t published a single word here since early December. But my focus on the blog is not clear either so that doesn’t help. And then there’s the novel which I was totally going to write last year and which – *spoiler* – I did not write last year. I suspect I want to do too many things at once and I need to calm myself down and just FOCUS on one thing at a time. Of course, I don’t mean only blog or only freelance or only write the novel because in order to survive as a writer, you need to be able to juggle as many different writing streams as possible. But I tend to think about all of them at once, become horribly overwhelmed and ultimately, start none of them. So I simply need to start one thing. And often once that flow kicks in, the other writing is easier, too.

This is possibly more than you wanted to know about writing but there it is. I think you could probably apply the feels I’m having to anything that feels stuck in your life. Things you super, really, truly want to do and yet day after day, you find yourself not doing them. WHY? I want to do this thing so why am I doing everything but this thing? Maybe it’s time to go back to the therapist for a spot of head shrinking because I am obviously crazy in the coconut.

Also, I’ve been drinking Coke again. I know. I’m disappointed in me, too. But I have been religiously attending my workout classes at Cinch so I am not a complete and utter failure at life. Thank god for Cinch, Nikki and my beautiful training buddies without whom I would surely be foetal right now. If nothing else, my approach to exercise is proof that I am capable of FOCUS and CONSISTENCY. I just need to find a way to apply that to other areas of my life. And it’s weird because sitting down to write is WAAAAAY easier and more fun than the triceps massacre I endured in class today.

So hello from hell, happy 2017 and thank you, as always, for sticking around while I bounce from crisis to crisis. Someday I hope I can make you guys proud by actually doing something of note with my writing. Until then, and even if that day never comes, know that the small act of you reading my words here is the hugest of big deals to me. THANK YOU.