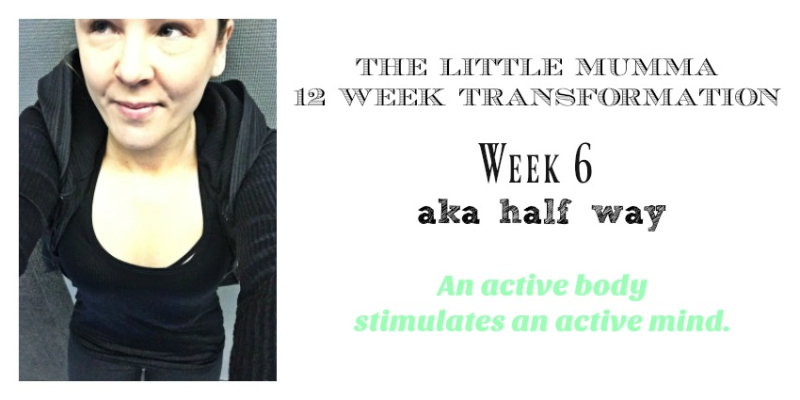 I’m late posting about last week because I started an online course in creative writing. Though I am still feeling a bit tired and a lot time poor, it seemed like now was the perfect time to begin. And I know exactly why.

A while back, before I started this 12 Week Transformation, I took a class at the gym. I think it was Body Balance which for those who aren’t familiar is a yoga/pilates/tai chi kind of hybrid. It’s awesome and so good for stretching out your body as well as strengthening it. So I’m doing this class and I’m hovering in star pose or something like it and my poor, stiff body is in that inbetween state of wondering why I’m torturing it at the same time as it is thanking me for finally, finally moving. And as my muscles slowly released into the stretch, something released within my mind. Though the practise does require a more silent mind, I couldn’t help but enjoy the flood of thoughts. Suddenly and joyfully, I felt a rush of creative inspiration come over me.

When I am sedentary, so too is my creativity.

This is not the first time I have experienced this creative release while exercising and I don’t think it’s a coincidence. When my body is jammed up with tension and stress, I’ve discovered how blocked I feel in other areas of my life. When I am sedentary, so too is my creativity. Nothing is flowing.

I listen to a podcast, “So You Want to Be a Writer” and they suggest that if the writing isn’t coming, to get up and do something physical. Maybe it’s walking the dog, maybe it’s hanging out the washing, but the mere act of moving seems to have a knock on affect in the brain, shaking loose whatever was blocking you. Thoughts and ideas flow more easily.

And it’s not just useful for creativity but for mental clarity in general. An active body seems to stimulate an active mind. When you consider the cocktail of feelgood hormones that exercise releases along with the fact that an elevated heart rate pumps a whole lot more oxygen to the brain, it makes sense that we feel so much more switched on and plugged into whatever we’re doing following a workout.

As someone who also has a long history of depression and anxiety, I cannot stress how crucial exercise is to keeping me mentally balanced. I am lighter, happier in general, my mood swings all but disappear (quitting Coke is also a huge factor here) and I feel much better equipped to face the normal challenges in life that previously threw me for a loop. Exercising regularly helps me to cope better in all areas of my life. I am calmer and better able to reason. I can “mum” with a degree of patience that felt impossible before.

Full disclosure, exercise was not THE cure for my mental health issues. When I was first diagnosed in my early twenties, I was regularly exercising and though it helped, it was not enough. And for many people it won’t be. Some people need anti-depressants. I am one of those people. But I can absolutely say that while exercise alone was not enough to balance my moods, neither is medication. The best solution for me is a combination of both. I take one pill a day and I exercise at least four times a week. Both play a vital role in keeping my head in check. Oh, and and limiting sugar. Too much sugar makes Angie go cray cray.

Like my trainer Nikki says, “Aesthetics is only ONE of the reasons people should train,” and though society will tell you it’s the most important reason, trust me, it’s not. I’ve had three kids and I’m almost 40. Chances are Sports Illustrated aren’t going to be calling about my cover shoot any time soon – and too bad for them because I am a fucking warrior goddess. Exercise strengthens my body and it also strengthens my mind. And what better defence against the pitfalls of advancing age? I am staying sharp. I want to realise my full potential. Whether I look good in a bikini is a secondary concern. But for the record, Bren tells me I’m a stone cold fox.

We had some friends over for dinner. I drank wine and perhaps ate a little more slow-cooked lamb than was strictly necessary (baaaaaa!), and in the morning, I felt reasonably shocking. A bit seedy, a lot sleepy. Once upon a time, the only solution would have been a can of Coke and a day spent lying around eating ALL THE CARBS. Instead, I got up and went to the gym. I ran on the treadmill for 18 minutes before my Body Balance class began.

WHO EVEN AM I?

This is the half way mark and naturally I am quietly disappointed that I haven’t lost 15 kilos and gained a 6 pack. Never mind that these were never my goals in the first place. But when you give up Coke and start working out like a demon, you secretly expect to become Gisele. Nope, still not Gisele.

But there is no denying I have transformed my life. 7 weeks ago, I was slamming down three Cokes a day, snacking on fast food and lying around feeling half dead. Less than 2 months ago, this was my reality. Today I ate a kale salad for lunch – and goddamn it, I LIKED IT. I am exercising 4 times a week without fail. I have reprogrammed my way of being. And that is exactly what I set out to do.

I’ve lost one measly kilo but my body has changed. Is changing. Will continue to change. Slow and steady. I’ll keep tweaking things as I go but what I’m doing right now is sustainable in the long term. And that has to be the best recipe for lifelong success.

And about that photo….

So the photo at the top is of me lying on my yoga mat waiting for my Body Balance class to begin. If you look closely, you'll notice I have a weird growth on my torso. What is it? At first, I thought it must be my ribs – they are unusually large  - but my ribcage has two sides and only one is sticking out which seems anatomically impossible. Is it some weird pocket of fat? A hernia? A third boob? 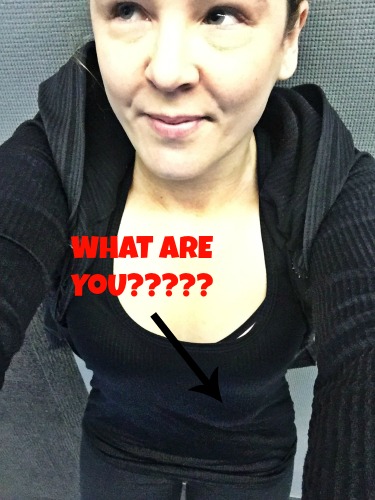 I stared at this picture for the longest time trying to work it out and in the end, I concluded that it's a tissue that I've stuffed in the waistband of my pants. I think. Perhaps we'll never truly know. But it's seriously bumming me out because this mystery lump has totally ruined that sleek bodyline I had carefully crafted with the magical combination of lying down and gravity.

A WORD ABOUT THE CINCH PROMOTION

Thank you to everyone who enquired about the 8 Week Training Transformation specials at Cinch. The response was overwhelming and all places have now been filled. But if you missed out this time, don’t fret. We’ll be running another 8 Week special beginning November 1. Keep an eye out for details in October.

Here is some further reading on the effects of exercise on the brain.