This winter was, in a word, bullshit. It was cold outside and I felt cold inside, and if that sounds overly dramatic, well, DEAL WITH IT, because I don't like to be cold – literally or figuratively. And this winter I was numb with both.

It was around this time I discovered some strong women who have been around forever but for whatever reason, I was only now appreciating. I saw them with fresh eyes, eyes that desperately needed to see smart, talented women sitting comfortably in their power. Harnessing that power. Not apologising for that power. It was THRILLING.

In many ways, I suppose I present to the world as reasonably fearless. I say things that many people wouldn't. I tell the truth even when it's not pretty. But I censor myself plenty. My self-deprecation is sometimes an apology in disguise – like I'm sorry for having this forthright opinion and I'm no expert so sorry for even speaking. There are topics I feel strongly about that are relevant to motherhood that I steer clear of because I worry about causing too much of a stir or losing readers – even though I know I could make my argument without being deliberately offensive or divisive.

On many levels, I am still afraid.

The most recent example is the post about training for my wedding: on the one hand, I was concerned about offending women who will, at their lightest, never weigh what I weigh at my heaviest. On the other hand, I worried that people would look at my body post-training and think, Geez, she mustn't have worked very hard because her body ain't that good. All the second guessing in the world. But was it necessary? I was simply telling my story. This is a story I am qualified to tell. It's my fucking story! But still, I hesitate.

So let me present some women who have been rocking my world of late and inspiring me with their fearlessness. 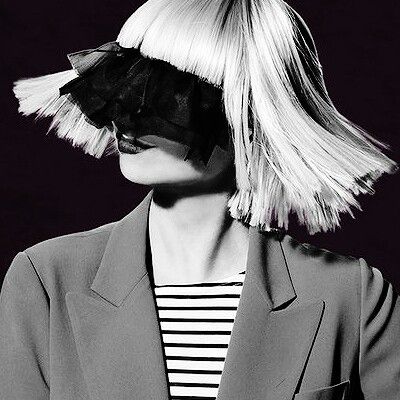 I think I was the last person in the world to hear Sia's last album, 1000 Forms of Fear. I was completely oblivious while it stormed to the top of the charts. I knew of Sia, had loved her previous indie releases, but when she broke through to the mainstream, I had no idea. I finally noticed Chandelier, really listened to the lyrics and they struck me to the core. I understood that girl so much – a sideshow in a champagne glass. And then the loneliness of the comedown. At various stages of my life, this has been my story. Chasing happiness glass by glass, I can always match up those occasions with a particularly low period of my life. Nothing is a better antidote to sadness than loud music and a fuzzed out brain. It looks fun from the outside, I know, because people love that Angie. She is such a good time. But the recovery is brutal.

And the rest of the album has a similar resonance. It's full of brave songs with beautifully raw lyrics and Sia's beautifully raw voice. She is so incredibly talented. But then there's the whole hiding her face thing. She says, "“I don’t want to be critiqued about the way that I look on the internet." And who can blame her? People are cruel and crueller still in this online world. And though hiding her face is a gimmick in itself, the success of her music is not reliant on her image – and in particular, her sexiness – which is a huge feat especially for a female artist who typically must trade on her attractiveness in order to be really successful. 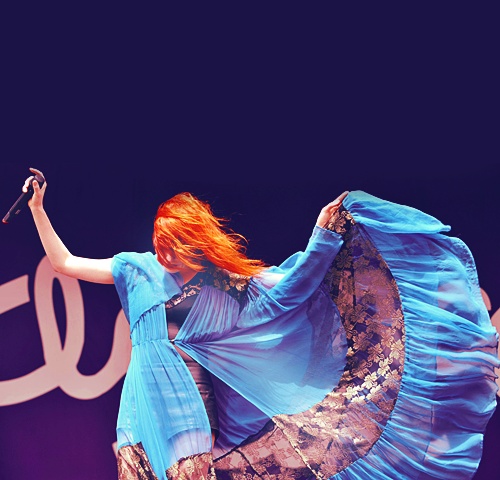 Confession: I actively disliked Florence for the longest time. She annoyed me, her music annoyed me. It smacked of pretension. But then Triple J started playing her latest album and I heard something different, something new. And now I think Flo is the sexiest goddess in all the land. But she's sexy in the least obvious way. Her voice is soaring, theatrical. She cloaks herself in flowing bohemia and dances like a hippy who's been converted to Jesus. She is not conventionally beautiful. But my god, is she beautiful.

Florence is so powerful and commanding on stage that to hear her soft and sweet speaking voice off stage is really weird. I expected her to be ballsier, but instead she's very polite and very British. But clearly, she is fearless where it counts. Perhaps she doesn't much like talking about herself, but she is supremely confident in her abilities as a musician. I love that. Power doesn't have to be related to extroversion or a huge personality. 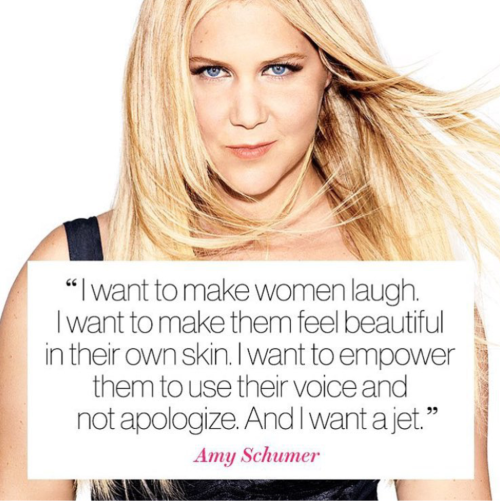 But isn't it fabulous when a smart and hilarious woman is in your face about it? Deliberately and unapologetically. Amy's personality is deeply polarising for many people and for those who do find her offensive, I wonder how much ingrained standards about what a woman should behave like are shaping their opinion – probably without them even knowing it. Amy is the anti-lady and we all need to get on our knees and thank her endlessly for taking that bullet for us. Because who really wants to be lady? What even is a lady? From my experience, a lady doesn't say fuck, she can have monogamous sex but she should never talk about it, she can't get drunk and she should never be too loud, too opinionated, too sexy or too smart. A lady is pleasant, inoffensive and largely inconsequential.

Amy is a woman – complex and nuanced and human. And if that shrivels a man's nuts or makes other women uncomfortable, then so be it. She is so gutsy and so real and SO FUNNY. It's sexy as hell. Amy makes me want to speak my truth – without a tagged on apology. Thank you, Amy. 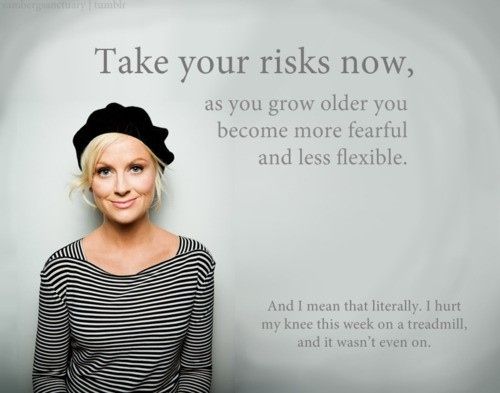 Let's all stop and marvel at Amy Poehler's career. Firstly, there's this idea that women aren't funny, and certainly not as funny as men. And then there's the reality of the type of woman who's allowed to be on our screens – she needs to be beautiful if she expects to be a leading lady. By conventional standards, Amy does not cut it. But anyone who has seen Parks and Recreation will know that she OWNS that position.

Actually, you CAN be a lead even if you're quirky and funny, but you also need a penis. Think Adam Sandler or Seth Rogen. But it's hard to be truly hilarious if you're trying to remain beautiful at all times. Comedy requires fearlessness like nothing else. You can't be afraid to look like an idiot, to throw yourself into a scene physically. But as women, we tend to be more concerned with looking silly/ridiculous/unattractive. This is what makes actors like Amy so inspiring. I'm also reminded of Julia Louis-Dreyfus, Rebel Wilson, Leslie Mann, Tina Fey, Melissa McCarthy – actually the list could go on. That makes me happy. More and more actresses are making bold choices and breaking down expectations. They have to push harder to get where they're going, they have to be smarter and thicker skinned. I didn't and I wasn't. But there's no time like the present. 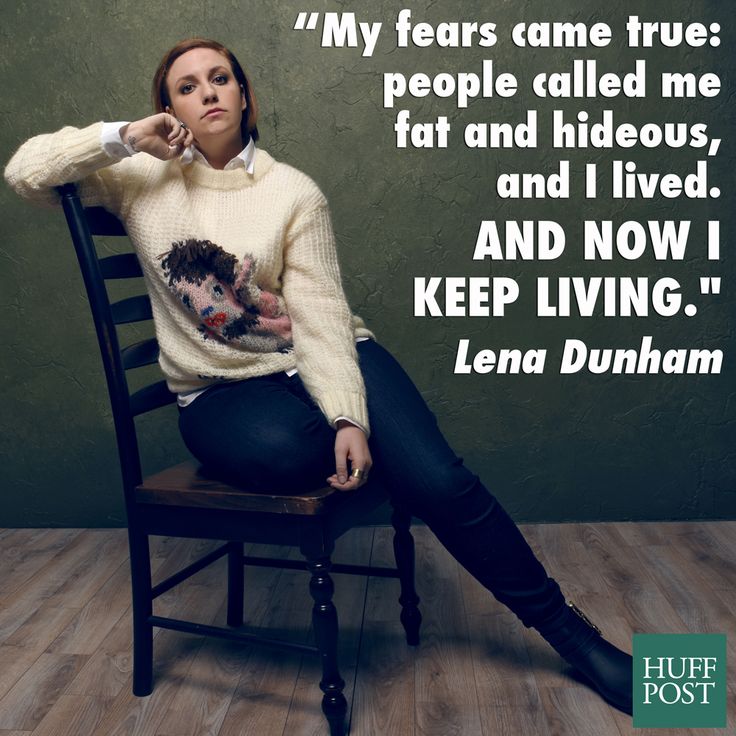 I hated the first few episodes of Girls. Who are these unattractive people? Who gave this weird girl a show? And the answer is, she gave herself a show. By virtue of her insane talent. And now I am so in love with Lena and every unconventional thing about her.

But initially, that unconventionality was jarring. We are so conditioned to seeing beautiful people being beautiful on our television that it actually offends us to see anything closely resembling reality. When a girl like Lena Dunham can have her own tv show (and it be astonishingly successful), this is a very good sign for us as a society. We need to see Lena and the kind of actors Lena hires to be on her show. Quirks abound and faces that are not fit for Hollywood quickly become beloved because the characters have such heart. We NEED this. Alternative voices and alternative faces are actually our voices and our faces. In fact, they're not alternative at all.

Lena makes me ache for younger me. If only I had known how to harness my talents and shake off external expectations. I spent my twenties trying to fix the things that weren't right about me instead of focusing on what had been right all along. We are all enough just as we are, but it takes courage and steely determination to break through the barriers that would have us believe we're just not pretty/smart/skinny enough. Oh, man, I ache for the girl I was. I hope Harlow can be less like me and more like Lena, bending the world to suit her and never, ever the other way around.

This is obviously not a complete list. Any strong women rocking your world? Who do you admire the guts out of?

And some vintage Little Mumma: a timely post for me to revisit, Crossroads tells me that I am as fearful today as I was in my twenties. I am unsure of my worth – definitely when it comes to acting, but also as a writer. I suppose I need to decide I am good enough sooner rather than later – every day that passes with self-doubt is an opportunity squandered and a message sent to three impressionable little minds that it's okay to just let life pass you by.