I Am Not A Food Blogger: Tefal Cuisine Companion 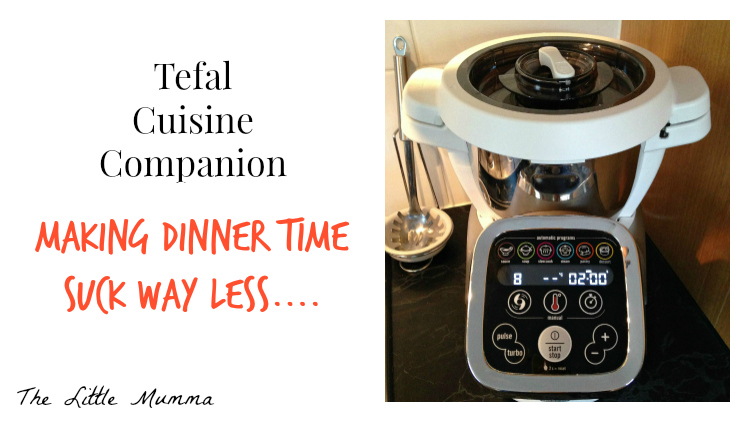 One time, I was attempting to make my own Mexican seasoning because the packet ones are so full of shit. I threw in a little spice here and added a little herb there, and all was going well until I forgot that the lid on the salt grinder was broken. It turns out that when you’re seasoning taco mince, 30 grams of rock salt is too much. Very too much. And I know this because I actually served that taco mince. As a meal. To my family. Who I'm supposed to love. Bren, deeply loyal and deeply hungry, suffered his way through, declaring it, “not so bad” and then drinking seven litres of water. The kids had toasties.

So I don’t blog about food.

I like food. I think I can even recall a time when I enjoyed cooking it. But every day I must prepare the evening meal for a bunch of ingrates. Oh, I love them. Even the ginger one. But one loses one’s will to lovingly prepare foodstuffs when the recipients of said foodstuffs pull faces and cry when the answer to, “What’s for dinner, Mum?” is anything other than sausages or take-away pizza. “That’s okay,” they’ll console me when I tell them the pizza will be homemade, but I see the way the light in their eyes has died.

I am no expert. But that’s okay, I’m not a person that blogs about food.

Why did none of this occur to me as I flew to Sydney for the launch of the new Tefal Cuisine Companion? Why did this not occur to me as they plied me with real champagne and fresh guac and corn chips? Why did alarm bells not sound when I recognised none of the other bloggers at the event because they were all food bloggers and I don’t read food blogs because I don’t blog about food?

I don’t have to tell you I was on the verge of a vomit/faint combo when our host said, “And now, let’s head to our workstations so we can all cook something in our Cuisine Companions!” I can’t understate just how much I was shitting myself. I was scared.

Thankfully, the Cuisine Companion was easy to use and the ingredients were already measured out for me. If there had been a camera, I could have recorded my own cooking show. In no time, I had whipped up a cheese cake – something I’ve never actually made before. It was so easy. And when it came time to eat it, that was easy, too.

All the cheesecakes are belong to me.

Life with three fussy kids has sucked the joy out of cooking for me. That’s just a straight up fact. I know it’s not true for everyone but it’s absolutely true for me. What I want to do is make good food quickly and easily.

Then I want the kids to eat it. But as far as I know, there’s no appliance for that.

The Tefal Cuisine Companion has changed up the way I cook – and it’s taken the place of other appliances like my slow cooker. I loved using my slow cooker because it meant that when dinner time came around, all I had to do was serve it up. The downfall for me was disorganisation – if I didn’t get the slow cooker going early enough – normally before lunch – then some things wouldn’t cook for long enough. What I like about the Tefal is that I can control the temperature and speed up the cooking process a bit if needed. This is particularly handy with Bolognese Sauce.

Tried and true favourites in the Cuisine Companion include risotto, chicken soup, pizza dough, choc chip cookies and of course, Bolognese sauce. The machine comes with an extensive cookbook but with the exception of the pizza dough, I haven’t needed to follow the recipes in order to use the Cuisine Companion effectively. Mostly I have adapted my own version of meals and this is an intuitive process that I actually enjoy. I can throw in different ingredients, substitute others, cook for longer or on a higher heat to make food the way I like it. But for those who are less confident, the included recipes make preparing food very straightforward.

Some people complain that appliances like the Cuisine Companion take the joy out of cooking – normally someone who likes to constantly fiddle, stirring and seasoning and whatnot. But for the rest of us, the fact that we can set and forget is a huge part of the appeal. I just don’t have time to stand and stir a risotto. In fact, the insanity of that time post-school and pre-bed is my least favourite of the day, the time I am most shouty, the time I am at risk of saying, “Feck it, we’re getting take-away.” I don’t want to get take-away. I rarely enjoy take-away when I buy it. I definitely don’t want the kids eating take-away too regularly. And cooking at home is so much cheaper. Anything that inspires me to cook at home and that makes doing so easier is worthwhile for this family.

I am not a food blogger. But motherhood is all about the food. So here I am. It’s weird territory. An awkward fit. I have no expert comment to make on food. But I am an expert on the difficulties of cooking good food for a family each day. The Tefal Cuisine Companion is helping me be better at this whole food caper. Pretty happy with that.