5 Things I Hate About Motherhood …. and a bunch more that I really love 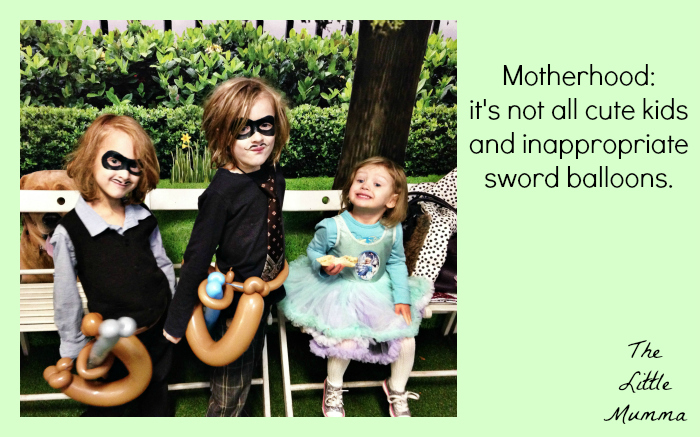 While Bren was away for work, I sent a text to a friend, “Doing this gig alone has given me time to reflect on just how much I don’t enjoy motherhood.”

I sent it with an intended element of mirth but I sat with my statement for a little while, tossing it around in my head, to figure out just how truly it resonated. 11 days of solo parenting was skewing the results but on some level, I had to admit that there is so much of motherhood I don’t enjoy.

It’s the petty bullshit that breaks me down. The squabbling and arguments shred my nerves. The constant trail of toys and kid paraphernalia irritates me. A uniform worn once and returned home far too grubby to wear again makes me insane.

But fuck, the kids are young and presumably they’re going to be annoying for a good while longer yet. That’s a long time for me to bitch and moan about it. The future seems bleak.

To get it out of my system, I made a Top 5 list of things I don’t enjoy about motherhood.

Nothing makes me crazier than hearing the kids fight. It’s the pitch of their voices, the intermittent screaming and the inevitable crying. I find it almost impossible to block it out and let them sort it out for themselves. And when I do, nine times out of ten they’ll drag me into it anyway. I have no patience for refereeing who had the red car first. He’s teasing and she’s copying and I’m hiding because I CAN’T TAKE THIS SHIT ANYMORE.

It’s the age old parenting problem. Saying no and sticking to your guns unleashes a torrent of whiney fuck. Is there any wonder my kids get ‘treats’ most days?

School lunches. Dinners that everyone will eat. Multiple course breakfasts when I’ve barely had a chance to stuff down two spoonfuls of yoghurt myself. And then the snacks. All the fucking snacks. I used to quite enjoy cooking. USED TO.

Taking one kid somewhere? Great. Enjoyable even. Even two is okay. But wrangling three kids, trying to keep an eye on each of them, buckling them into the car, getting them out again, steering them safely across roads – I find all of it stressful. Even the simple act of walking somewhere together is fraught with difficulty because no-one can walk at the same pace. Luca must rush ahead and Harlow must dawdle and who knows what the fuck Zig’s doing. He’s the middle kid and no-one pays attention to them.

Wet kids, hairwashing aversions and my own flagging energy make the night-time routine tricky. Then there are arguments about which books to read, who will sit next to Mum and I can’t see the pictures! Freedom is so close, I can taste it, but though I can barely keep my own eyes open, the kids just simply cannot get to sleep because it’s too bright/ too dark/ too scary / Ziggy is breathing in an annoying way, Muuuuuuuuum!

Last week I took Luca to his swimming lesson and afterwards while he was in the change room getting dressed, I watched one of the other mums drying her son’s hair under the hand-dryer. He sat quietly as she slowly ran her fingers through his short hair, gently tousling it dry. I was mesmerised by this tender moment, both of them almost trance-like. I wondered when was the last time I had a moment with one of the kids that wasn’t marred by stress or rush.

So it made sense to sit and really think about the things I do love about motherhood. Because I do love it. So I started writing down moments and they’re so nice to reflect on.

I am trying so hard to lean in at the moment and sometimes this means working against an incredible urge to lean way, way out instead.

When all else fails, looking at photos of my kids helps. I am biologically compelled to be madly in love with their sweet faces – especially when they’re smiling back at me from a screen. Silently.