For Andrew and Myuran: I will always stand for mercy 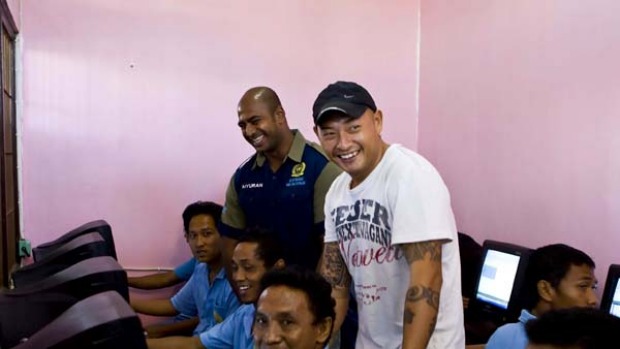 I am against capital punishment. Entirely.

Sometimes my beliefs are challenged, dramatically moreso since becoming a mother. I think of the evil that is perpetrated against children around the world and concede that I would gladly pull the trigger myself if anyone hurt my child. But capital punishment is far too black and white an outcome in a wildly grey justice system.

It's very easy to talk about right versus wrong, and in those simple terms, people often feel justified in their beliefs. But we are all mere human beings, flawed, capable of missteps and stupidity. The law must take in to account the human being behind the crime if justice is to be truly achieved. And in a world where recidivism is high (and almost expected), shouldn't we celebrate when a correctional facility has actually succeeded in 'correcting' an inmate?

In these past few days, when social media was set alight with the armchair authorities on good and evil, I have heard every wild theory on Andrew Chan and Myuran Sukumaran, but there are numerous accounts on record of people who actually spent time with these young men, came to know them. Every single one of those accounts told of two changed men. Not only had they been rehabilitated, but they actively sought to help other inmates towards the path to redemption. They were making the most of the limited opportunities available to them in Kerobokan Prison, a place that has driven many an inmate mad. In the face of hopelessness, Andrew and Myuran rose up. I find that incredibly inspiring.

And reading the social media vitriol spewed forth with such righteousness and self-satisfaction, I wonder who among these people could say their lives have contributed half as much as Andrew and Myuran have managed in their ten years of incarceration. On the issue of drugs, oh yes, these unofficially appointed arbiters know right from wrong! But what have they actually done to earn this sacred seat of sanctimony?

The argument that seems to be put forth with most righteous conviction is that drugs ruin lives and that our tears should be saved for the families who have lost children to overdose, not for the men who attempted to profit by trafficking them. I suppose their logic follows that executing Andrew and Myuran has two immediate benefits – one, that's two less drug dealers in the world and two, it will be a powerful deterrent for anyone thinking about smuggling drugs in the future. It's deeply naive to suppose that removing two very insignificant players would halt the trafficking of drugs in any real way. And sadly, despite the grave risks, there will continue to be desperate and disenfranchised people seduced by the promise of a better life in exchange for one little job.

Lack of supply is not what kills demand and it never will be. Human beings, by our very nature, seek out ways to feel something other than the mundane existence of our every day. We all do it – and predominantly with substances that chemically alter our brains. Hello, 5pm on the dot glass of sav blanc! I find it hilarious that habitual drinkers distance themselves with such disdain from the stereotypical junkie. The legality of the substance is so much less important than understanding what drives us to seek out that substance. We want to feel higher or more mellow, calmer or happier. We want to feel anything but what we're actually feeling. That a person's drug of choice happens to be legal does not grant them superiority. In fact, more lives are ruined by alcohol than any other drug.

And while I'm thinking about hypocrisy, how many of those baying for blood have ever used a prohibited drug themselves? How many have used a prohibited drug IN BALI? Because the weekend consumer drives demand just as much as the addict – likely more. And many of us, at some point in our lives, will feed that demand. Drug dealers exist only because as a society, we are ravenous for a way to dull the pain.

And in that utopian world where heroin and its dealers have been completely eradicated, resourceful humans would find an alternative.  Obscenely wealthy rappers are ODing on sizzurp – that's a mix of codeine-based prescription cough syrup, soft drink and, often, Jolly Ranchers candy – and yet some people still believe the answer to the drug scourge is executing small fish drug dealers? In a world where such a thing as sizzurp even exists, we must concede that the problem is not the criminals who sell the drugs but the human condition which finds so many of us desperate to get away from our own minds.

I am not an apologist. Andrew Chan and Myuran Sukumaran committed a serious crime and they deserved to be punished for it. But I do believe it's important to acknowledge what their lives were like in the lead up to that fatally stupid mistake they made as young men. Not to excuse the behaviour but to better understand it. What compels a young person with seemingly their whole life ahead of them to gamble everything? It is short-sighted to suppose that greed is the only factor. And by identifying those factors, could we better identify those kids who are at risk? Get to them early, provide the necessary support at school and steer them in another direction?

Acknowledging who an inmate becomes after they have been incarcerated is also essential. Prisons are renowned for turning petty criminals into hardened ones. They are renowned for breaking spirits and often times, minds. And this makes the redemption of Andrew and Myuran all the more incredible. Within the walls of Kerobokan Prison, a notoriously corrupt hell on earth, they found a purpose. They became their best selves under the most trying of circumstances.

Appearing before a judicial review in 2010, the governor of Kerobokan prison, Bapak Siswanto, spoke of the men’s character and positive influence on other prisoners. “Instinctively my spirit says, can’t he be pardoned?”

I don't condone their crimes but I greatly admire their determination to transform what was left of their lives. They had become valuable members of their community. The world has gained nothing from their deaths. Their brutal end was senseless and shameful.

But those who cheered on the executions with a bucket of popcorn and a running dialogue of one strike, you're out callousness were right about one thing. The deaths of Andrew Chan and Myuran Sukumaran did send a powerful message. That to some, redemption is infinitely less important than retribution.

And what could be more desperately sad than that?

Rest peacefully, boys. If there is a heaven, I believe that is where you are.