Kid vs Car: Why I Need To Up My Road Safety Game 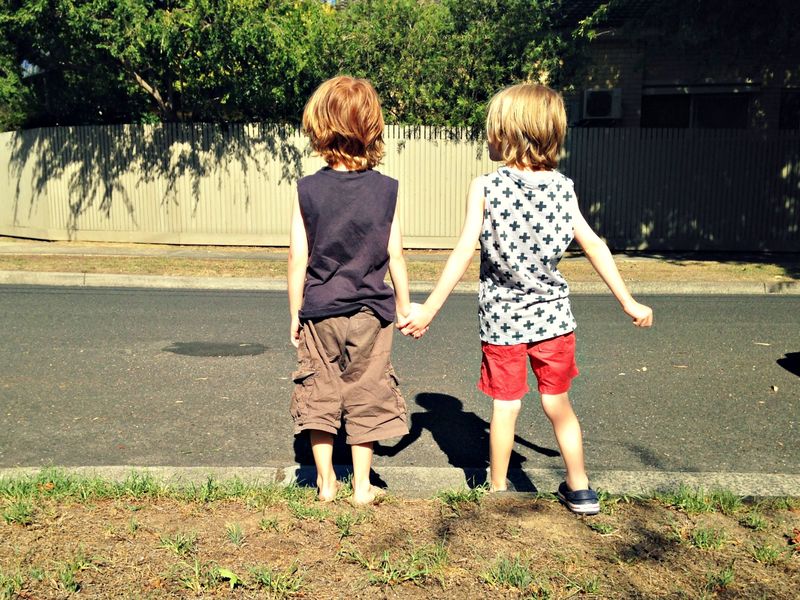 The memory is vivid in my mind. One little body versus one comparatively huge car. This story has a happy ending. I wonder if I could tell it if it did not.

It was school pick-up. I was ten, maybe eleven years old? I was sitting in the front passenger seat beside my mother who was slowly turning a corner and just beginning to accelerate. From nowhere, he ran – like a skittish animal. But there were no blinding headlights, no moment of disorientation. He just didn’t see us. BECAUSE HE DIDN’T LOOK.

In slow motion, his body rolled off the front of our car, as though he was made of rubber. We were travelling at a speed of no more than 30 km/h, perhaps less, and for this reason, it was as though we bumped him out of the way rather than struck him.

Grabbing him by the arm, the boy’s mother yanked him angrily off the road. “How many times have I told you? You don’t run on the road!” I was so surprised at her furious reaction. My own reaction was something closer to tears and all his mum could do was yell. I didn’t understand why she didn’t cuddle him. Wasn’t she glad he was okay?

But I’m a mum now and I get it. I think most mums get it. When your kid does something dangerous, fear is often masked by anger. Adrenaline is surging, your heart is pumping out of your chest and in some small, subconscious way, you’re thinking about how this behaviour reflects on you as a parent. More than anything though, you want the moment after a close call to be a chance to finally get a message through. “This is why we don’t run on the road! It’s dangerous!”

So now I’m thinking about that little boy and how the story could have ended so differently if we had been travelling any faster, and I’m wondering whether my children have better road sense than he did. Huh. I’m not so sure.

You’re probably familiar with the Early Learning  Association Australia’s Vic Roads-funded program, “Starting Out Safely.” No doubt you’d have seen the “ThingleToodle” TVC campaign on television and wondered, “What kind of name is ThingleToodle?” and also, “What even is that guy? A pig?”

Fair questions, both. Unfortunately, I don’t have the answers BUT I did learn that despite watching zero hours of children’s television personally, I can sing this jingle word for word.

Now Thingle Toodle, mysterious guy that he is, has five important lessons to impart. These are:

So initially, I read this list and thought; this is all no-brainer stuff. I do all of it without question. The kids ALWAYS wear helmets when they ride a bike, we use pedestrian crossings whenever possible and wearing a seatbelt is as second nature as breathing. I would never compromise the kids’ safety in this way. And in these things, yes, I am an excellent role model.

But I have realised that crossing the road with three children is such a stressful business that I often ignore best practise. Impatience sees me hurrying my kids across roads with the merest glance for oncoming traffic. It’s chaotic at best. In my defense, the logistics of trying to hold hands with two kids while carrying a third is like a mathematical equation with no solution but if it means the difference between my kids being safe on the road and not, then it seems like it’s worth my time to try and solve it.

Instead of rushing from point A to point B, I need to slow down and use the tools that ensure the development of good road sense in my kids. Stop, Look, Listen and Think is simple and effective but only if we take the time to practise it consistently. I find myself constantly reminding the boys not to run across the road but to no avail. It dawns on me that my words are ineffectual when they so sharply contrast with my actions which are almost always to hurry us across roads.

Monkey see, monkey do. Monkey don’t care so much for what other monkey say, y’know?

So if my road safety skills could use a little refresher, maybe I’m not alone. As a parent, it’s easy to begin with the best of intentions and then fail to notice the gradual way things begin to slide. In the moment, the objective is for everybody to get across the road as quickly as possible and live to tell the story. But the aim is to make sure our kids learn road safety to last them a lifetime. We won’t be there to hold their hands forever so cementing road sense early is crucial.

I looked at some statistics and they’re confronting. Every year, pedestrians die crossing our roads and children are especially vulnerable because they are smaller and their ability to sense danger is less developed. This is a wake-up call.

My kids are absolute sticklers for wearing seatbelts because I am. I never waver. We ALWAYS buckle up, every single time. They don’t have the same inbuilt discipline when it comes to crossing the road and I am responsible for that, too.

So my plan of attack going forward is to:

In summary, parenthood is hard and there are too many things to try and remember. But some things are more important than others. Keeping kids safe on our roads is one of them.