I have been missing in action. And I bet you're all feeling kind of the same. Stretched a little too far over far too many things. So many things to organise and do, obligations to keep, children to entertain.

If you have not been organised throughout the year, the festive season can really knock you for six. I am currently knocked for about 12. Whatever that means.

I was organised with presents and then I discovered a mother can be TOO organised with their children's Christmas gifts. Whatever was the best and most desperately required thing during the mid-year toy sales is unlikely to feature on the wish list written to Santa almost six months later. In which case, if you don't run out and choose at least one gift from that list, Santa is going to look like a schmuck. Why even write a list? Does Santa even read it? What a fat prick!

So yeah, when I bragged on Facebook that I was done with Christmas shopping in November, the universe provided the fall to follow my pride. Excellent.

But no mind, it's all sorted now, and the kids are luckier than they could ever truly appreciate given their very sheltered view of the world. I do my best to explain but until they walk through the slums of Calcutta, the refugee camps in Syria, they don't know. But I try to give them a sense of the privileges they enjoy because people who don't understand this end up being jerks with no social conscience. This is the time of year to have a social conscience.

I've been frayed at the edges and I need to tell you about it but the time, the time races by me. There has been anxiety and ill-advised headstands and plans to move and it all feels like EVERYTHING right now. So much stuff, filling my calendar, swirling in my brain and growing as piles of clutter at my feet.

But I love this time of year. I love Christmas and always have. It's chaotic but I love it.

I bought about ten presents to give to the various Christmas gift appeals and I would have bought more. It was hard to stop. Bren watches me come through the door with more plastic bags full of toys and just sighs. He would never stop me. He knows it makes me feel like I am doing something and I need to feel that. I want to be connected, even in this small way, to the people who have the least. I can't imagine how this time of year must devastate so many parents, unable to provide the gilded extravagance of Christmas we're sold via Hollywood and the almightly advertising machine.

Now I don't know about you, but I love a free printable and I wanted to share with you the CUTEST Santa tags I found. They're just CUTE. They feel crafty without requiring much more than a printer and a pair of scissors. My kind of craft. 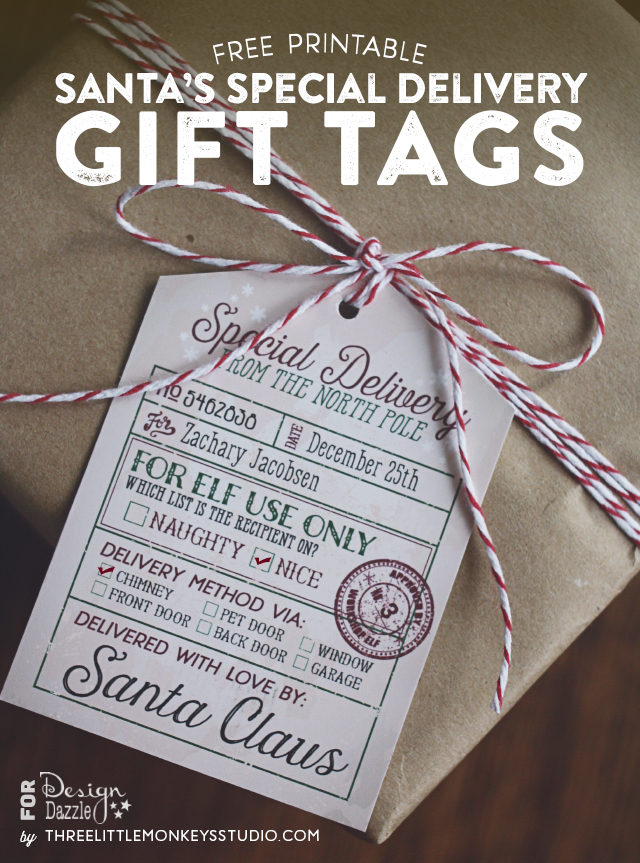 Do you love them? I love them. You can find them here. I happened to have some cardstock around so used that to print the tags and they turned out so well.

Sometimes cute Santa tags can pull you through. Don't under-estimate this shit.

Okay, that's it. I have more to say, I always have more to say but I have to go take my kids to see Christmas lights around the neighbourhood. There's one house in particular with fake snow and a giant inflated Santa. Who doesn't love that? Everyone loves that.

Merry Christmas, you guyzzz. I hope you find some magic in amongst the insanity.