It’s so typical of me that when I said yes to trialling the Tefal Actifry 2-in-1 that I missed the part where they said I had to follow a four week healthy eating challenge. In my head, I was just going to make chips with a fraction of the oil. Brilliant! I thought. Sign me up! I thought.

And then I got the program. Four weeks of carefully chosen meals and snacks developed by Nutrition Australia and including recipes especially for use with my brand new Actifry 2-in-1. Oh, sweet baby cheeses, what have I done? In my entire life, I have never dieted. Not once. I was terrified.

Of course I was. The way I fuelled my body was shambolic. Breakfast and dinner were okay – porridge pretty much every morning and the family meal at night which was always some variation of protein and vegies, but it was during the day when the kids were at school that the wheels really fell off for me. I had a terrible habit of not eating until I was absolutely ravenous at which point I craved something fast. I never felt like eating a homemade sandwich. I didn’t have the patience to prepare it. I almost always bought my lunch for this reason. Not only could we not afford for me to do this, but it meant that my food choices were far from perfect. I didn’t exist on drive-through meals but I am certain I was choosing foods that were too calorie dense to be eating with such regularity. Instead of a lean chicken and salad wrap at home, I’d be eating schnitzels.

And the rest of the time? I was existing on Coke and chocolate buds I’d sneak from the cupboard – but you can’t hide from yourself so I’m not sure why I bothered.

It was a small mercy that I had given up Coke just prior to beginning the 4 week plan. If I was still riding the blood sugar rollercoaster whilst trying to stick to a slightly calorie-reduced food plan, I would have crashed and burned very early on. I realised that Coke had been driving all of my unhealthy cravings. I realised that I had been given an amazing opportunity to overhaul my life and get myself back on track – for my health and for the health of my entire family. As much as I tried to shield them, there is no way my bad habits were not having a knock-on effect for the kids. And so now I needed the knock-on effect to be a positive one.

With a daily allowance of around 1500 calories, this plan was not about starvation, but I’ll admit, I spent the first few days feeling hungry. I think this is psychological more than anything. Measuring food and counting calories means you’re constantly thinking about food and thinking about food makes you want to eat food. FOOD! But I rediscovered the simple pleasure of things like an apple and feeling a bit hungry made it possible for me to really appreciate the food I did eat.

I made several adjustments to the plan according to what would suit my family and I. The plan included lots of fish, as diets often do, but I can’t bear ANY fish of ANY description and so usually made a chicken meal instead. I also replaced all the veal recipes for ethical reasons – I aim to make all my meat purchases as free range and humanely farmed as possible but the very nature of veal means this is not possible to do. Anyway, a personal decision but one that meant we ate a lot of chicken!

Here are a couple of the first meals I cooked in the Actifry. 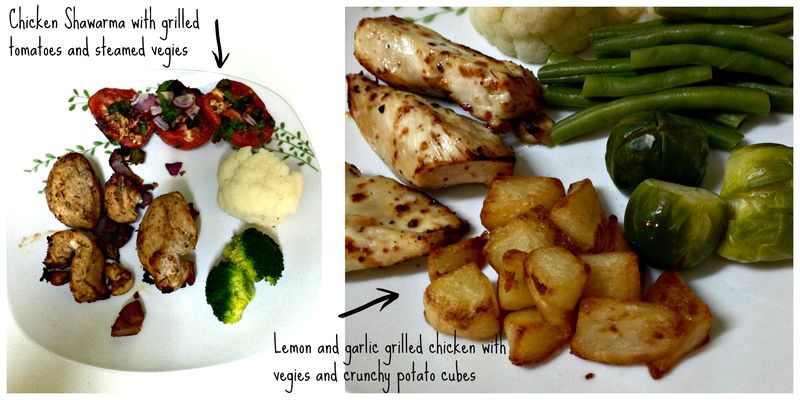 If they look pretty yummy, you’re right, they were! Especially those chips. I really could not fault those crunchy little cubes of heaven – except to say that I could have eaten three times as many. SO GOOD. And it’s hard to believe how much oil I didn’t need to get that golden crunch. Let’s just say that any time I cook potatoes in the oven, they require a complete drenching in oil in order to get the same kind of result. Spray oil in the oven doesn’t cut it, but half a tablespoon in the Actifry is all you need. It’s a miracle.

The eating plan was especially helpful in getting my head around serving sizes. Knowing exactly how much food I should be putting on my plate made a big difference. I now know the plate should be half covered in (ideally green) vegies and the other half split between protein and carbs. As summer approaches, this becomes even easier for me because I love salad like a sister. Yes, salad drowning in dressing is particularly delicious but a squeeze of lemon juice on spinach leaves is actually yummy, too.

The biggest breakthrough for me though was learning that every choice I make comes down to organisation, and having all my meals planned just made it so much easier to stick with it. Left to my own devices, I am at the mercy of hunger and boredom and bad habits ingrained over a lifetime. Being prepared makes it so much easier to choose well. It’s such a no-brainer. So if I want to eat a salad sandwich for lunch, I know that I need to grate the carrot and cut the tomato and store it in the fridge this way so that making the sandwich is quick and easy. Meal planning seems time-consuming initially but actually saves time and a whole lot of money. And calories!

The Actifry is now an essential element in our weekly family meals. In addition to still cooking some of the recipes included in the original eating plan, I’ve also adapted some other dinner favourites in a way that has dramatically reduced the amount of oil I use. For instance, Chow Mein, which normally requires quite a bit of oil for stir-frying, can now be cooked with 2mls of oil without losing any of its yumminess. However, those recipes whose flavours benefit from slower cooking over a lower heat probably won’t work as well in the Actifry – I learnt that the hard way with Bolognese sauce.

The speed with which things cook in the Actifry is a massive part of its charm – and the set and forget element is great in the busyness of pre-dinner madness. Convenience is a huge factor. The Actifry 2-in-1 lets you cook in the bowl underneath and the tray above simultaneously. So you might cook chips underneath for 40 minutes and set it to beep after 30 minutes at which point you’ll pop your fish in the top tray to cook for the remaining 10 minutes. If you’re a serial burner when cooking on a stove top, this timed feature will save you!

Meat in the top tray can be hit and miss. I wouldn’t cook a beautiful piece of steak in it as it could dry it out. What did work beautifully though were chicken strips in a teriyaki marinade. The marinade, which was quite thick, seemed to retain the tenderness of the meat really well.

But the big test of taking a 4 week healthy eating challenge and using my new Actifry: how do I feel? Guys, I feel great. Seriously. I lost 3 kilos and gained back some much needed energy. Eating for health and vitality seems like a drag – and there were moments it felt exactly that. But it’s worth reprogramming ourselves if we’ve lost our way. Real food cooked healthily that still tastes amazing? Is possible. And you will learn to crave it.

I look forward to further experimenting with the Actifry. And you know what? I want you to experiment with your very own Tefal Actifry, too!  Here’s how to win. 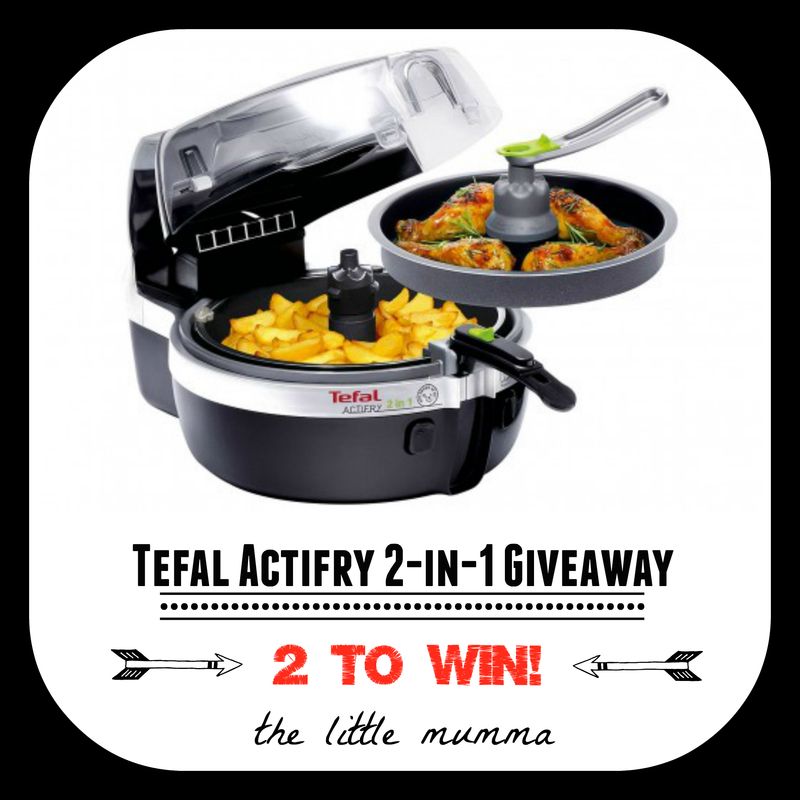 The Tefal ActiFry 2-in-1 is a new innovation in healthy cooking featuring a stirring arm and heat distribution cooking system that means you can cook with way less oil but still enjoy delicious food. You can pick one up from leading department stores and electrical specialists nationwide for $399.95 (visit tefal.com.au for more information).

Or you can enter to win one (I have 2 to give away) by doing this:

Definitely for hot chips! That is my true weakness & it looks like my little one has it too

I'm a Type 1 diabetic with a big family history of heart disease so I've long been careful about what I eat and the sort of foods I feed our children. The Actifry would get well used in this househod! I think the Actifry is really going to take off as so many people these days are aware of the things they need to do to reduce bad fats in their diet.

Thanks to everyone who entered. Some of you even wrote me little poems but this comp was randomly drawn so please don't think I didn't love all your answers. I'd give everyone an Actifry if I could!