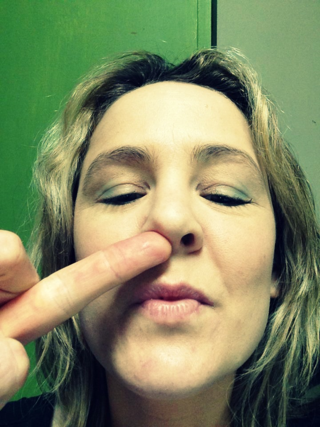 Bren photobombs me being selfie-involved

I remember once when I was about twenty-one, maybe twenty-two, I got an earache. I was living in inner Melbourne with two boys whose second favourite thing to do after smoking bongs was smoking bongs. One of them was the boyfriend who never told me he loved me, but that was okay because I never told him either. I was so hardcore.

Except then I got an earache and I was so beside myself, I had to call my mum, because she was so helpful the last time I had an earache…..when I was seven years old. She seemed a little surprised to receive my call at 11pm but I told her, "Mum, it hurts so bad and I don't know what to dooooo!" She told me to put a heatpad in the microwave and then rest my ear on it. I did what she said and eventually drifted off to sleep because mums are always right.

I have toughened up considerably since then. You have to. Even though every fibre of your being tells you to run home to curl up on your mum's couch, growing up means that when you're sick, the person who takes care of you is you. If you're lucky, you'll find a partner with an attentive bedside manner (in sickness and in health – ooooh, yeah!) who'll humour your need to be tucked into bed, even when your 38th birthday is sneaking up on you.

Brendon had to tuck me into bed last weekend. I got some kind of flu. Luca had the first and most vicious dose – his temp spiking and falling for a period of 7 days – and then everyone else followed suit, thankfully for shorter and less intense periods. If I had to name the person who got the second worst case, I would nominate myself. I think I was ripe for the picking, what with the 'hell's frozen over' scenario my body has been experiencing since giving up Coke and drastically cleaning up my diet. Of course, the long term benefits of these changes are obvious, but in the short term, I think my body felt it was under siege. I know my brain did (does). My immune system was a sitting duck. Poor little ducky. I promise I'll take better care of you now.

Anyway, I have untucked myself from bed, and I am feeling almost right again. Getting sick did sorely test my Coke abstinence – so desperate was I for a quick hit of energy – but I can report, with no small amount of disbelief, that I did not take so much as a sip.

But as time passes (and I guess I must be close to 3 weeks now – I don't know, getting sick has thrown everything out of whack), I am finding the challenge….harder. And….boring. I feel a bit lost. In the first week, I was enjoying drinking so much water and I had rediscovered the joys of a good cup of tea, but now I'm thinking what's next? There's a big, hollow spot left where I used to put Coke and nothing is filling it. I am so bored with mineral water, mineral water and lemon, hell, even mineral water and a dash of cordial when I'm feeling outrageous. None of it is Coke. And my mouth feels perpetually dry because it needs a couple of layers burnt off by an icy cold goddamn muthafucking Coke.

Here is my current feeling; Is this it? Is this what life will be like from here on in? Just very plain beverages drunk only for the purpose of hydration?

Yes, I know this all sounds like insanity. But Coke is it, my friends, and if you never thought so, then you can not understand. You're so sweet to care, but don't send me your factually incorrect links. Highway patrolmen DON'T keep Coke cans in their cars to clean blood off the road but who gives a fuck anyway? People suck down on ciggies they procure from a packet plastered with images of gangrene toes and brown-toothed mouths riddled with cancer. We do what we do in spite of knowing better.  I don't know why smokers don't use those silver ciggie cases instead? I know I would. Tobacco was never my first love.

But Coke is. Was. Is. But I had to quit that shit and it had very little to do with all the bad things I have ever read about Coke and everything to do with the fact that I knew it was time. I was ready to feel better.

So now I'm heading into that space (after a short detour with the fucking ebola virus, I swear) and I am feeling strangely empty. Is this the part where I am adjusting to my new reality? Making peace with it?

I have been wandering around the edges of my life trying to get a sure footing on something again. I haven't been able to write. Getting sick took me right out of the world and I'm trying to get reaquainted. Do you do that? After you've been unwell? Find that everything gets messy and the routines of your life, the exact same ones you were following as normal just days ago, suddenly feel foreign?

Anyway, everything is a bit of a mess. Figuratively. Literally. And there's a gaping hole where Coke used to be and I'm just wondering if it needs to be filled with something new or whether it might, over time, just close up by itself.