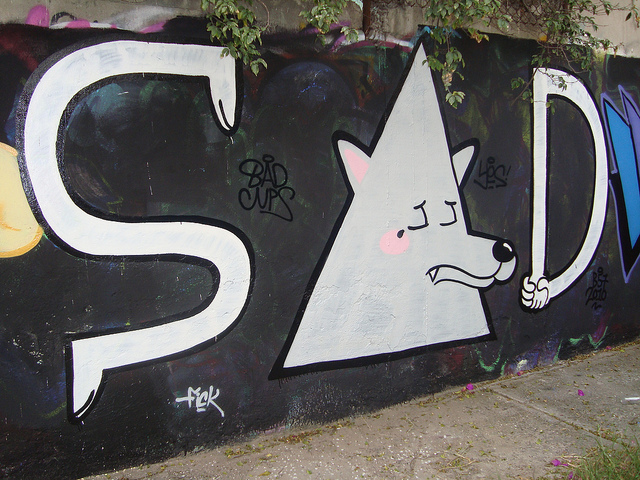 At my very worst, I would wish to fall. Walking down the stairs at work, I thought maybe if I just missed a step, tumbled to the bottom, I could rest a while. I was 24 years old and I was exhausted. I thought having an accident, perhaps breaking my leg, would mean I could go to hospital and just lie in a bed all day. Someone else could make the food; someone else could make the decisions. Someone might come and ask how I was feeling, take my pulse, their fingertips firm against my wrist. It wouldn’t matter if they were a bit officious. In fact, being ordered to rest by a stern health professional seemed ideal.

I thought about falling down stairs as a way of escaping the exhausting demands of living in the world.

I was so tired. Weary with decisions and expectations and grown-up things to do.

“No-one likes coming to work, Angie,” my boss told me when I mentioned I was finding it difficult to turn up and do what was expected of me.

He thought I was just immature. Lazy. He thought I needed to suck it up (is there a single worse expression?).

“Do you cry in the shower every morning before work?” I asked him.

He looked shocked. “Do you do that?”

“Yeah,” I said. And I put my headset back on and talked to rude, fucked up banking customers and sometimes I was just as rude and fucked up back. If I could go back, I’d probably apologise to a lot of them. Not all of them. But some.

My boss was right. Life is all about sucking it up and doing things you don’t want to. That’s what being a functioning adult is all about. So why was I so bad at it? I sucked at sucking it up. My boss was shocked that I was crying every morning but he had no idea really. It wasn’t just a couple of escaped tears mingling with the shower spray. It was me curled into a ball, far enough away from the showerhead that the water felt cold by the time it reached me, sobbing for no reason I could pinpoint. It was me wiping the fog from the bathroom mirror and not recognising the face that looked back at me. She had such frightened eyes.

She was so different to the girl everyone else saw. That girl was fun. And funny. My god, she went out of her way to make people laugh. She was loud and sweary and you always wanted her to come to after work drinks because you knew she’d do something inappropriate.

It’s not that this girl wasn’t real. It’s just that the frightened girl was inside her, too, and she didn’t know how to make her leave.

I didn’t know how to make her leave.

And still don't. Probably never will. But I have learned to live with her, to manage her. That is my reality.

I’m okay. Better than okay, really. Some days I am positively great.

But there was a time when I really, really wasn’t. Brendon saw the worst of me. There was a time I think he really would have liked to walk away. But he didn’t. I think partly because he was worried about what I would do if he did. How sad.

Sometimes I worry about these drugs I take, these drugs that brought me back to myself and evened my keel. But it’s only when my Facebook feed floods with hippy dippy shit written by people who have made a business of mistrusting modern medicine. I know, I know, that my low dose anti-depressant is the key to my survival in this world and ain’t no St John’s Wort going to touch the sides of my sadness. I don’t say people should blindly take drugs. I say people should not be afraid to take them if nothing else is working. This is my one life and I can’t waste a precious second of it on the misguided notion that nature can cure everything. I don’t believe that.

But when my doctor wondered whether I needed to up my dose during a particularly difficult point last year, I resisted because I knew there were other things I could do. I could get up and move. I could stop filling emptiness with food that was destroying me. I knew adjusting these things would improve my mental state. It’s a balance and different for everyone.

Some people can just go for a run. That would be nice. But it didn’t work for me. I was 24 years old and after a morning session at the gym, I would come home so exhausted that I’d need to nap. I remember it was the coldest winter that year and when I wasn’t sleeping, I would sit practically on top of the portable heater and still feel cold right inside my bones. I sat so close I burnt my arm on one of the rungs. The scar has all but faded now but for years afterwards, it would turn dark red in the cold weather. A guy in an acting class I once took made a comment about how ugly it looked.

People are weird and I wonder if they hear the words that are falling out of their mouths.

I hear mine and sometimes I can’t believe I’ve said them. There’s a perpetual sad just under the surface and I use humour to deflect. I try to be kind but sometimes my words have an unintentional edge. It’s an excellent indicator of how I’m travelling. Sometimes I’m a real jerk. My mum can tell you. So can Bren.

Some people are who they are no matter where they are or who they’re with. I admire it so much, but I’m not like that. I am interchangeable. I can be just exactly who I think you want me to be. Or who I want you to think I am. I don’t think I’m inauthentic. Just confused.

I tried to get off anti-depressants once. Not because I was travelling well, but because someone had wondered aloud when I was going to. Implication: you really shouldn’t be on them forever. So I tried. And as I drove into work, I found myself utterly bereft at a song on the radio.

Obviously, this song by Destiny’s Child was going to resonate with me. Middle class, Caucasian me in my bright yellow Hyundai Accent, driving to my call centre job at The Age. Obviously.

Pounding the steering wheel, tears streaming down my face, “I need a soldier!”

I remember the feeling of waking to the weight of an anvil on my chest, dreading the morning light. I will never forget that heaviness. But I have not felt it in a long while.

Thank god for that.

I can’t believe he is gone.