5 Terrific Ways to be Less of a C#nt 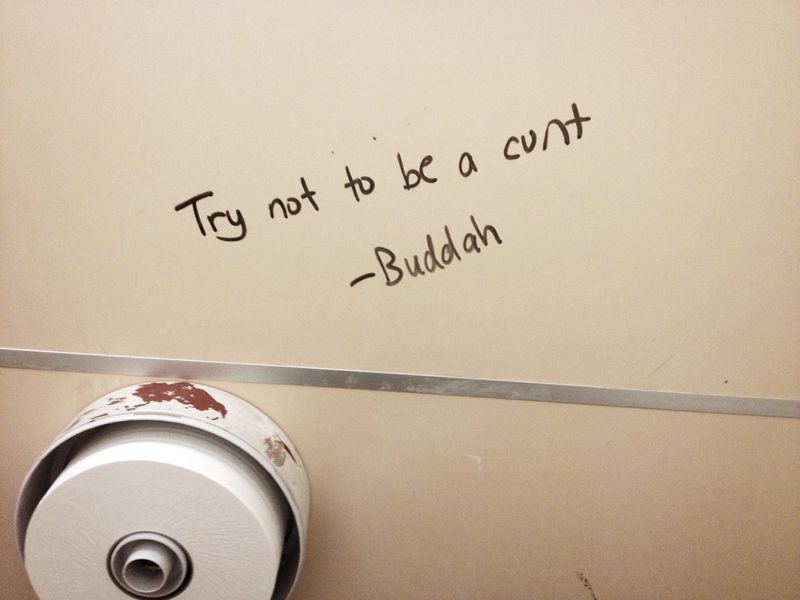 The first time I saw him, I admit, I did wonder if he was right in the head.

There he was, standing on the side of a busy road, a senior citizen with a strangely cherubic face, rosy-cheeked and beaming as he waved to every car that passed by as though the passengers within were his dearest friends. I mean, he was really waving. And frankly, I could not stop myself from waving back.

Every morning and every afternoon, come rain, hail or shine, he was there, clearly loving life and his job as a School Crossing Supervisor. If someone waved back, he almost exploded with joy. It was infectious.

I heard there had been complaints to council regarding him. People wanted him removed from the position. I wondered what kind of person would go out of their way to complain about someone whose only crime was being friendly.

Yes, my first thoughts about him had been Is he sane? closely followed by  Is he competent in supervising kids across the road? Obviously, the answer to both was yes, and I knew my original thoughts were borne of this awful mistrust we have of anyone who appears to be too happy. Simple joy is regarded suspiciously, and openly expressing that joy is bizarre outside of a socially acceptable context (generally a celebration or at the very least, in the company of at least one other person). But some of us are so uncomfortable with overt happiness that we’d rather have a poor guy lose his job than maybe, oh, I don’t know, wave back.

Crazy Happy Crossing Guy is still there, waving like a madman and radiating his crazy brand of joy, and that’s a win for humanity. No matter what else is going on in my day, seeing him always makes me smile. But meanwhile, there exists some serious c#ntery in this world, and I have taken the liberty of devising a five point plan to help avoid the pitfalls of being a C in our day to day lives.

If you don’t have your own Crossing Guy, this step simply means return kindness where you find it. Keeping our heads down and playing it cool might seem like the thing to do but actually, we’re not fifteen anymore and smoking a Dunhill Blue at the bus stop looks lame so let's all just GROW UP. It’s our connection to one another that makes this world a decent place to live in. Say hello, for fuck’s sake. Or at the very least, send someone a happy tweet. Fuck.

I know, more waving but seriously, would it kill you to acknowledge that someone has let you into traffic or stopped to allow you by in a narrow street? The road is a place for so many petty grievances – someone taking too long to park, someone executing a three-point turn in twenty-seven points, you know, piddling little moments that in the course of a day can amount to a serious need for frown line Botox. So many of us are nervous drivers. Many of us are in a hurry. Some of us are trying to drown out the sound of children in the back seat. When we smile or wave, we let each other off the hook. The smallest gesture can change the course of someone’s day. For instance, I once made a small middle finger gesture to an impatient man in a Commodore and he repaid this gesture by spitting through my car window. That’s just a little bonus piece of “What Not To Do” – you’re welcome.

So you always give the courtesy wave and society thanks you. But while we’re busy being INCREDIBLE HUMAN BEINGS, we must be careful not to fall into “righteous indignation” territory because righteous c#nts are some of the worst c#nts of all. When I let a person into traffic and they don’t wave, I have been known to screw up my face and snarl, “Would it kill you to smile, bitch?” I call these moments, “off message” and like a clumsy politician, I return to my speechwriter for extra coaching. In this case, I am the speechwriter. So I tell myself, “Whenever you want to call someone a bitch/idiot/dumbfuck, replace the insult with Sweet Pants.” You’d be surprised how this simple word swap will turn your frown upside down. Initially, you may still find yourself shaking a fist and screaming, “You’re fucking welcome, Sweet Paaaaaants!” but eventually the absurdity will defuse your road rage. If it doesn’t, you’re probably an irredeemable c#nt. Soz.

Okay, you didn’t drop that piece of rubbish. It’s not your Coke can (because it’s probably mine – shut up). Yes, it’s almost certain that KFC wrapper belongs to the fucker who throws it at the bin, misses by a mile and then walks away shrugging like, “I did what I could.” But if you’re heading to the bin and you pass other rubbish on your way, provided it’s not covered in shit, figuratively or actually, then pick it up, man! I am an extreme germaphobe and even typing this makes me think of hand sanitiser but I have come to realise that sitting around being angry at the litterers of the world is an exercise in futility. People who don’t give a fuck? Generally don’t give a fuck. But I do. I like my parks litter-free so when I’m there I’m going to roll up my sleeves like the fucking yard duty goody two shoes that I am. For the record, I also walk my trolley back to the trolley bay. Dame Angie.

The average train of thought runs these three words on repeat; Me. Need. Want. I don’t have a scientific study to back this up but after 37 years of knowing humans and also being one, I feel confident in making this assertion. It’s not our fault. It’s this damn world that keeps telling us we need to be more, get more, spend more, more more. When we have kids, the focus shifts from the self onto the family unit and what it needs more of. Needing or wanting stuff for the kids often feels altruistic in a way that wanting it for ourselves never does. But the truth is it’s more of the same; undertaking the majority of our actions for the sole benefit of ourselves or our immediate family.  We all want to do well and provide well for our tribe but let’s be less c#nty as we go about it. For me, doing something unexpected for someone else takes the focus off myself for just long enough to remember how good that actually feels. Ahhh, so much world to see when my head is not buried in my own bot bot! Maybe small things, sometimes big things but all things that don’t have a direct benefit to the person doing them actually kicks way more into the self bank than we realise. Doing good things for others feels good and fills up the empty in a way that pretty shoes don’t seem to. Buying shoes when I am feeling like a bad person just makes me a bad person with new shoes. Of course, I’ll keep buying pretty shoes for the scientific purpose of testing my theory, but I know that if I really need a shot of happy, transferring my focus onto helping someone else is the strongest dose available. There’s no c#nt in community…..sort of thing.

The quest to be less of a c#nt is one I implore everyone to undertake. Of course, it won't be easy. It's inevitable that we all have a little c#nt within. But we must try! This is especially important for those of us with kids. We can never forget that lurking behind the adorable faces of our progeny may lie the c#nts of tomorrow.