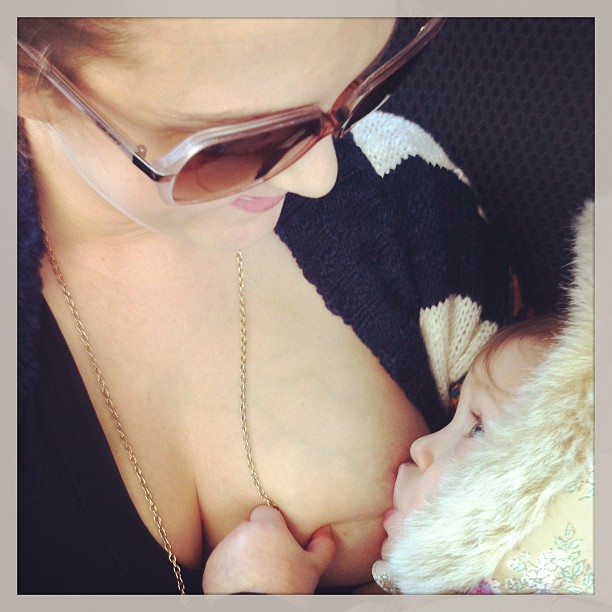 I must have amazing knockers.

I mean, I really must. A midwife did remark once that I have
lovely breasts for nursing a baby and they have served me and my growing babies
well but why oh why must it be so impossible to wean?

You would think, and I certainly hoped, that by my third child, I would have some small clue as to
how to bring the breastfeeding gig to a peaceful end. But I didn’t know then
and I don’t know now.

Harlow is still breastfeeding at 15 months….and she shows NO
signs of stopping.

In fact, Harlow is breastfeeding ALL NIGHT LONG. Every night, she
wakes for boob. Most nights, I bring her in with me after that first wake up
because I know that if I put her back in the cot, I will only have to get up
again when she wakes an hour or so later.

The current arrangement is supposed to be the best way for
me to get maximum sleep. But I am still exhausted, my back is ruined from
trying to accommodate a restless 1-year-old in my bed, and the tipping point,
Bren has now moved out of our bed and in with Ziggy to prevent him from getting
up during the night and hopping into bed with me as well. I would invariably
end up squished between the baby and the three-year-old since they both prefer to be velcroed to me at all times. Bren was often left clinging to the edge
of the bed (queen-sized) but at least he was left alone.

They say that a situation is only a problem if it’s a
problem for you.

It’s a problem for me.

Harlow is my last baby. In some ways, it would be nice to
let the breastfeeding come to a close when she is ready…..so long as she is ready in the next two months. In fact, she could
feed even longer than that if it was just once or twice a day, maybe first
thing in the morning, but this overnight feeding is breaking me. She is teething
at the moment so is extra clingy. I don’t want to get to the point I did with
Zig where I resented breastfeeding and felt like it would never end. But we are
drawing ever closer to that point.

If you are wondering why I don’t just do whatever worked the
two times previous, it’s because I can’t fucking remember. Well, that’s not
true. I remember that we swapped Luca to a bottle of cow’s milk overnight and
that worked. I remember Ziggy wouldn’t take a bottle so I fretted and worried
right up until he had his last breastfeed. Sadly, I have no recollection of
what I actually did to get to the last feed, I only recall the fretting.

And now there is baby Harlow who won’t take a bottle AND is
allergic to cow’s milk. So I’m fucked twelve ways to Sunday. TWELVE WAYS. Possibly more.

Additionally, I harbour a selfish desire to wear bras with underwire
and to wear clothes that don't button down at the front.

I understand I am on the precipice of a tough call. The
night feeds have to go. HAVE TO GO. So this means I will need to get up to my
baby and cuddle her back to sleep and she is not going to like that. I mean to
say, that is going to really piss her off. So in order to stop feeling so
exhausted, I will have to endure a few exhausting nights. Maybe a week? What I
do know is that once the overnight feeds stop, generally the frequent waking does, too. I can’t help but be excited about that.

But the journey from Point A to Point B? Is daunting. I need to commit.