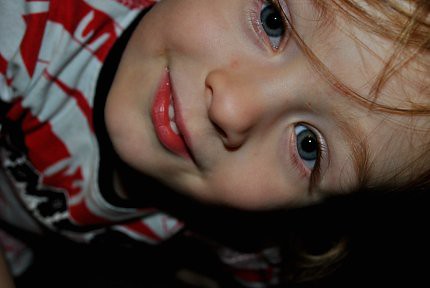 So yesterday was THE day. I finally did it. I had LD's beautiful blond curls cut off.

I'm playing single mum at the moment while B commutes two and a half hours to and from university for two weeks. So it's just me doing the dinner/bath/bed debacle each night which is why it took me so long to post the pictures last night. And then, I couldn't be bothered writing more than eleven words.

Post-haircut, how am I feeling? I'll say this. I LOVE his hair. I think it's a great cut. The hairdresser was really meticulous and talked me through everything she was doing to make sure we were on the same page. LD was pretty awesome and only had to be reminded of the impending lollipop reward a few times. Zee sat in his pram fairly angelically, too, and any time he piped up, I shoved a biscuit in his mouth. I think there was so much going on that I forgot to fully grasp the magnitude of the situation.

Because that's a LOT of hair. 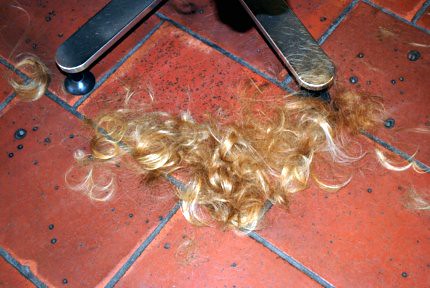 I do absolutely love the new hair. But it's the weirdest thing seeing him this way. Obviously recognisable but then, not.

I love that I can see more of his little face. I love that I won't have to brush out dreadlocks at the back of his head.

The only thing I don't love is the colour. We basically cut away all the blond. Waaaaaaah! Look up there at that pile of gold. Now, LD has hair that is, well, brown. You know, like a mouse.

So even though I am pretty much vehemently against it, I think I am going to have to do this -

Or not. I dunno. It was sad to see the curls go but it's the blond I'll miss most.

Other observations. I expected that when we finally went the chop, we would instantly reveal the boy. He definitely looks older. But more boyish? I kind of think he looks more androgynous than ever. Before, I saw a boy with long hair. Now, he is all sweet and impish. The face has come into sharper focus because the distraction of all that hair has been removed. There is no denying those Tweety Bird lashes or that rosebud mouth. Long hair or short, the kid is just pretty.

LD, for the record, hasn't expressed an opinion on his new hair. He certainly didn't object to losing the curls but that may change when he discovers the "beautiful hair" comments have dried up.

The audition? Was pretty straightforward. LD and I had to pretend to be finding somewhere to sit down on a train when some rude passenger takes our seat. The hardest part was stopping him from trying to 'operate' the thousands of dollars worth of equipment in that room. He wanted to use the video camera and talk into the microphone and at one point, I saw tripods crashing down like dominoes and us being thrown out with a bill for $25,000. Thankfully, that was in my head. And thankfully, the receptionist agreed to watch Zee for me while we auditioned because otherwise, the scenario in my head would almost certainly have come to life.

Yesterday was a big day.

And since we're talking about him, LD has been saying some funny shit lately. And he has an obsession with bums.

Two days ago, "Mumma, I want to show you something." "Ooh," I say, "What is it?" He reaches around and pats his little butt. Ooookay.

And this morning, he is doing the downward dog with his bum facing me. "Look at this, Mumma!" he says. "It's my bum." He wiggles his bum. "I'm a talking bum!" More wiggling.